US massacres in Somalia

Terrorist attacks by US military aircraft against civilians and livestock in Somalia. After the Afghan wedding slaughters and the massacre of tens of thousands of Iraqi civilians, innocent citizens in Somalia, grazing their sheep, become the latest victims of Washington’s murderous foreign policy. 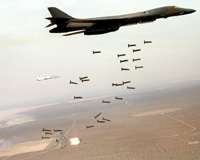 US massacres in Somalia

No doubt winning hearts and minds again through shock and awe tactics, the US of A, true to form, managed to massacre what eye witnesses describe as large numbers of civilians and livestock with its precision weaponry this week in Somalia in a series of attacks which began on Monday. A small boy was reportedly murdered in such attacks, along with three civilians, at Hayi on Monday evening, while a Somali Government official spoke of “a lot of casualties”, which were “mostly” Islamic fighters.

These attacks have been confirmed by the Pentagon although subsequent attacks, reported by Somali authorities, have been refuted.

Yet on Tuesday numerous eye witnesses spoke of assaults by helicopter gunships against civilian targets near Afmadow, in which 31 people were killed, including a newly-wed couple. A Somali defence spokesperson was quoted by AP as stating that these helicopters were American, although other eye witnesses said they did not have clear markings.

Ostensibly aiming at Al Qaeda terrorists in the Banka Jiira area of southern Somalia, the US military aircraft, from their safe haven tens of thousands of feet up in the sky, deployed weaponry which may have hit their targets – but also destroyed large swathes of territory on the ground.