How any Christian, or follower of any main religion, can rejoice at a death sentence being passed, defies logic. The decision to murder Saddam Hussein by hanging is the latest in a string of actions which have flouted international law in recent years. 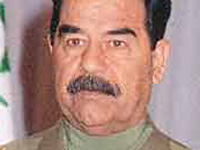 Saddam Hussein invaded Kuwait because this country was cross-drilling, stealing Iraq’s oil. The United States of America invaded Iraq without any pretext whatsoever except barefaced, blatant lies, slaughtering civilians, destroying infrastructures with military hardware, breaking the UN Charter, breaking the Geneva Conventions, committing acts of mass and wanton murder. Is George Bush to be hanged for that?

If there was no legality for removing Saddam Hussein from power under international law, where is the legality of this so-called court which sentences him to death? And under what jurisdiction does this court operate?

Any Christian will know that it is God’s right to give or take life, not Man’s and the fundamental law of Christianity is to protect the gift of life. Therefore how the White House can react with the adjective “good” in reaction to the news, just about sums up the Satanic nature of those who purport to being Bush-supporting Christians in the United States of America today. In short, they are closer to Satan.

The entire Iraq war was a travesty of justice, based on lies, greed and arrogance. If Saddam Hussein’s appeal does not result, History will be his judge. Curiously enough, instead of being judged for his own crimes, History will judge him in comparison with those of Bush, which are far worse.