On the Pope, Islam and Religion

The saving grace of the United States of America, in the eyes of many, is its innate capacity for self-criticism. Can one say the same about those who are depicted as representing Islam? 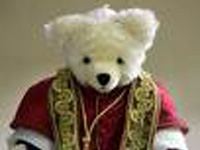 On the Pope, Islam and Religion

The USA’s capacity for self-criticism

Many are the people who vent their spleen at the outrages perpetrated by Washington’s external policy, its blInd support for Israel despite the numerous Zionist massacres, its lack of understanding of foreign cultures, its own acts of butchery, torture and slaughter of innocent civilians while the tentacles of the octopus spread around the world, locking Humanity in its grip, choking the life out of the international community while grabbing its resources. Yet these same people often state, as a saving grace, that the USA does have several points which exonerate it, one of these being its capacity for self-criticism and having a good laugh at itself.

A classic example of this is the The Simpsons, where Mr. Middle America is depicted as a beer-swilling, belching, uncultured idiot yet witty enough to come across as a hero, while his wife rules the roost at home. A recent show depicted the President of the United States as a chimpanzee, which ran across the Presidential desk in the Oval office screeching. No doubt those who make The Simpsons curl up giggling while they mastermind every episode, as do the rest of us watching Homer, Marge, Bart and Maggie, the diabolical Monty Burns, his adulating side-kick and the other inhabitants of Springfield.

The question is, how many of those depicted as representing Islam would be capable of having a chuckle at themselves?

Let us make an experiment. Here is a joke about Christ.

The owner of a house goes away on holiday and leaves his pet parrot at home. While he’s away, the parrot telephones all his friends in Australia. The owner comes back and seeing the phone bill, hits the roof. He storms into the living room, grabs the parrot from his perch and screams into its face: “You bloody bastard! Telephone Australia again and I’ll pull out your feathers, put a crown of thorns on your head, spread your wings out and nail you to that wall!”

Then he throws the parrot down on the table and storms out.

The parrot picks itself up, shakes its ruffled feathers and looks up to the wall, where he sees a crucifix with Jesus Christ hanging from it. Looking at this miserable figure, the parrot squawks:

“Who did YOU telephone?”

There will be a handful of decent Christians who are outraged by this but these do not represent Christianity, because most Christians will have a good laugh. The question is also posed, how many of those irate Moslems shown in the Western Press after the publication of those childish cartoons about Mohammed represent Islam? For instance, many of my Moslem friends thought some of the cartoons were funny, while I did not.

Does the Western Press like to get hold of the “Irate Islam” story and flog it to death?

Of course, the religious leaders have to be vigilant against attacks, especially at this delicate time when the Moslem world is very aware of its status and its treatment, historically, since the time of the Crusades. At that time, the Moslems were the ones who allowed freedom to practise religion, while the Christians were basically a horde of barbaric slaughterers, rapists and child-murderers. What would Christ say to that?

The difference between jokes and insults

Yet one thing is to have a laugh at a parrot, a telephone and Christ, and another is to insult a religion, and where do Pope Benedict’s recent remarks come in this context?

Were one to say that the entire Christian religion is basically a load of crap, based on some Angel coming down from space, telling some woman she was going to get laid by God, only through some sort of cosmic experience, and then the son born without sex having been performed wandering around temples teaching, then disappearing for years on end, only to come back and preach peace, yet to burst into a temple overturning tables in a fury, then get crucified and die, then suddenly get up and live again...were one to say that the whole story defies logic and while we’re at it, how about believing in the golden rabbits in the forest who rape fairies on Tuesday evenings after eating those funny mushrooms, then most Christians would be shocked.

Such an attempt to ridicule a religion breaks all rules, since religions are based on faith and mysticism, being attempts by Man to explain his condition and his relevance while at the same time setting out norms of behaviour, invoking God, the only being superior to us. Whether one wishes to believe in God as a visible entity or a notion is immaterial, since the concept exists in either case.

The relevance of Pope Benedict’s speech

The question before us this weekend is the relevance and context of Pope Benedict’s comments this week at the University of Regensburg in Germany.

For a start, the Pope referred to a report which stated that “there was something odd about the University – it had two faculties decicated to something that did not exist – God”, again, an ability to have a laugh at the very core of his essence. Would any Moslem Imam have the audacity and courage to make such a statement?

Also, what place did the quotation from Emperor Manuel II Paleologus of Byzantine about Islam have in this speech? For a start, quoting a piece about the Qu´ran preaching the spreading of religion by the sword is doing to Christianity the same as bin Laden does to Islam – taking statements out of context and exaggerating the importance of non-basic precepts.

The Qu’ran is fundamentally a book of peace, deriding violence in general terms and exhorting the followers of Mohammed to peaceful coexistence, as anyone who bothers to read the Book will see. It was the Christians who took the Bible along with the bullet to “civilise infidels”, it was the Christians who slaughtered women and children in the Crusades and in innumerable other Holy Wars, using a violence unseen anywhere else on the planet.

However Pope Benedict was trying to create a modus operandi for all religions to appeal to reason in a climate of debate and dialogue and not diatribes which inflate tempers and foster violence yet his choice of subject was perhaps misguided, especially at a time when Islam has such raw wounds and when Christians need to avoid rubbing salt into them.

How about a more intelligent approach, such as stating that we all worship the same God, we all have different visions of the same God, to whom we all have the freedom to appeal even in the most dire circumstances for comfort and to give us strength? This is not such a bad idea. The rest is a question of discipline, and not doctrine and until the religious leaders realise that and stop hiding behind academic treatises, coming out of their palaces and living like their prophets did, it is they who compound the problems between religions along with the hounds in the international press who are looking for conflict.

As for the Moslems, most of them could not care less what Pope Benedict says about Islam, yet the po-faced holier than thou ones who get uppety about such things, taking soundbites as attacks to their core, need to be less retentive and loosen up a little. If what Pope Benedict said was unnecessary and badly chosen, then the reaction by the few, but not the many, Moslems is once again infantile and demonstrates a lack of conviction in their religion.