The price of gold has climbed to over US$ 600 an ounce. Many are saying this is because of the pending war with Iran. However, this leap in gold prices has little to do with a real or imagined war with Iran, it has to do with greed. 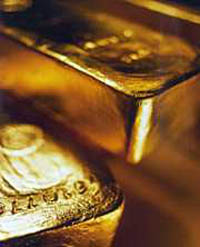 Remember the Bruce Willis movie, DIE HARD 3, where 'terrorists' stole dump-trucks full of gold from the N.Y. Federal Reserve Bank that belonged to different foreign countries? Think what that gold was doing there in the first place: in 1973 all the OPEC member countries agreed with the USA to sell OPEC oil only for U.S. dollars. This forced every nation in the world to buy U.S. federal reserve 'dollars' in order to purchase OPEC oil for import. They have been exchanging their gold for our otherwise worthless 'dollars' for years, having no other choice in order to import critical oil.

In March of 2006, Iran broke the OPEC oil-for-U.S. dollars-only agreement by offering oil on the Paris stock market for EUROdollars. Other OPEC countries fed up with U.S. hegemony are sure to follow. China and Japan, with their wallets stuffed with yuan and yen, are cheerfully holding Iran's coat while waiting for the dust to settle.

Since our "federal reserve notes" have no value unless all countries are forced to buy them at economic gunpoint, Iran is the leak in the dike. If the USA doesn't stick its finger in it, it will definitely grow. Once other nations see Iran getting away with selling her oil for real money, they will stop buying U.S. dollars and the USA will be flooded with inflation because of her idiocy in having federal reserve notes backed by nothing.

Inevitably, a major OPEC producer, Iran, just said NO!, and is selling its oil for more viable currency, with the benefit of wrecking the US economy far more than a thousand attacks on U.S. buildings could yield. Even our allies are rubbing their hands in glee as they eagerly await us to go down in economic flames.

Saddam Hussein attempted to sell his oil for other than U.S. dollars, and look what happened to him under the false excuse that he had "WMD's." Now Iran is attempting the same thing, so it looks like we might attack Iran under the false excuse that they may be thinking of developing breeder reactors in a few years that will take another 3-7 years to produce fissionable uranium and then develop a viable delivery system. But just THINKING of it years in the future is an excuse for war today, because when all is done, we gotta protect American dollar-based oil companies and their shareholders which comprise all the movers, shakers and campaign donors in the USA. And if it takes killing another 50,000 of your teenage children to protect their estates and trust funds, hey, it's worth it.

All across the U.S. patriotic Americans are being appointed to manage local draft boards by Duuhbya & Rummy who "...have no plans for a Draft." Yet Martha Stewart they send to prison for lying.

So, please pass this info along and tell people to get ready for: