The difference between Saddam Hussein and George Bush is that both signed death warrants but only one of them is in the dock. Let us draw some parallels between these two men and reach some conclusions. 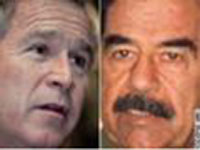 Saddam Hussein, we now hear, signed the death warrants of 148 Shiite villagers who had risen up against him in Dujail in 1982, for which Saddam Hussein sits in the dock and could face the death penalty. George Bush, in his six-year tenure as Governor of Texas, signed 152 death warrants, a record for any governor of any state in the history of the USA. An example of what George Bush is capable of is provided by the signing of the death warrant of Terry Washington, a mentally retarded man of 33 with the brain of a seven-year-old. Pleas of clemency were denied after a hearing which lasted barely half an hour.

George Bush accused Saddam Hussein of lying when he claimed he did not have Weapons of Mass Destruction. “This man stiffed the world,” he said. “We know where they are,” the Bush regime said. Rumsfeld said they were “In Baghdad and Tikrit and north, south, east and west of there”. Powell said, “They are being driven around the desert, in vehicles”.

But the one who was telling the truth was Saddam Hussein and the one who stiffed the world was George Bush. Where are the WMD?

Saddam Hussein was derided for his terrible prisons in which prisoners were tortured. Yet what happened in Abu Ghraib under the legions of George Bush defies logic, such was the shock and awe of the horrific scenes of human suffering and sexual depravity meted out on prisoners by American guards.

The US Armed Forces, of which George Bush is Commander-in-Chief, attacked civilian targets with military hardware, something Saddam Hussein never did. The USAF strafed civilian areas with missiles, dropped cluster bombs in residential complexes, committed acts of terrorism against women and children. Schools were destroyed, hospitals were strafed, hotels were targeted, infra-structures were razed so that billionaire contracts could be meted out for the reconstruction campaign.

Yet Saddam Hussein sits in the dock and George Bush sits in the White House. What a telling statement in the injustice of today’s world, what a perfect comment on the hypocrisy of the USA, a country which likes to brag about how egalitarian it is, about how concerned it is for equal human rights yet in practice perverts every course of justice and breaks every law in the book.