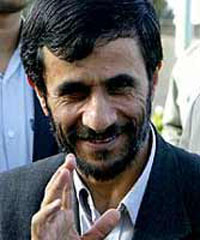 Announcing his pride that “the peaceful knowledge and technology are in our disposal in order to be used for different purposes”, the Iranian President mentioned that Iran has stood firmly “to regain its rights and will continue the path until their full restoration."

Regarding the sanctions imposed on Iran in the last 30 months, Mahmoud Ahmadinejad stated that he expects compensations to be paid and apologies made, before stressing that "The noble Iranian nation has never done any injustice against anybody and would neither be yoked by tyranny."

Expressing his vision of what he would like Iran to become, he stated that "We are a big family which should build our dear and great homeland and in accordance with its long history, turn it into the land of science, culture, justice, freedom, monotheism and model of pure life and developed life”.

Although there are those in the international community looking for trouble, and while wars sell newspapers, the fact of the matter is that Moscow, Washington, Teheran and other international players have been looking for a political settlement. Earlier this month, the Director General of the International Atomic Energy Agency, Mohammed el-Baradei, stated: “There are a few options and one solution. The one solution is a comprehensive, political settlement of the security, political, economic issues that underlie the nuclear programme of Iran. We need a settlement that on the one hand assures Iran of its right to the use of nuclear energy for peaceful purposes. Nobody questions Iran's right, I should say, but at the same time, assures the international community that the programme is exclusively for peaceful purposes”.

Indeed, the IAEA’s mission, by its own definition, is to “promote safe, secure and peaceful nuclear technologies”. Therefore why all this hype about Iran when the world stood back and allowed Israel to produce one hundred nuclear missiles?

Does Iran sit on its neighbours’ territories and build colonies on them, does Iran shoot children in the eye with rubber bullets? Does Iran bulldoze civilians’ houses with women and children still inside?

When the international community begins to act with one weight and measure to judge, we will be able to state that the world operates on a true notion of equal justice for all. Until then, Iran will be derided for trying to get a peaceful nuclear programme, will be accused of lying every time it says so, and Israel and the USA will have a carte blanche to perpetrate their acts of state terrorism in the name of only they know what.

Justice, it is not.