George W. Bush is not evil. He is just stupid

I once saw a bumper sticker that read: “I’ve never made a mistake. I thought I did once, but I was wrong.” 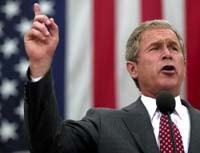 George W. Bush is not evil. He is just stupid

Well I have made a mistake. And today I must apologize to loyal Pravda.Ru readers, and to the thirty percent of Americans still enamored with the Bush dictatorship.

George W. Bush is not evil.

On second thought, this stupidity does make him susceptible to the Machiavellian machinations of evil men, like Dick Cheney, Karl Rove, Donald Rumsfeld, Alberto Gonzales and the rest of the plutocratic oligarchs who control America so extensively they can even abandon the facade of consulting with their puppet when developing policies detrimental to the nation and the world, but beneficial to their avariciousness and corruption.

If this reality was ever in doubt, one need only reflect upon the oligarchs’ now infamous attempt to transfer management of several American port terminals to a Middle-Eastern company. According to reports, Bush was not even privy to discussions about this plan until after they had been completed.

Of course this was not the first time the puppet masters ignored their puppet. In the aftermath of the September 11, 2001 attacks, reports also indicated that Bush was basically treated like an annoying child who is instructed to play in the corner while the “grown-ups” engage in conversation.

So perhaps Bush’s befuddled look of surprise, captured so well in Michael Moore’s documentary FAHRENHEIT 9/11, was genuine. Perhaps he had been left out of the conspiracy designed to permit, via act or omission, the September 11th attacks so he could appear earnest while regurgitating the fictitious “intelligence” used to rationalize the illegal invasion of Iraq.

Nevertheless, it would seem that any leader with a modicum of integrity would be incensed over the idea of being shut out of discussions having such momentous political ramifications. But Bush is not such a leader. Instead he possesses two of the most dangerous attributes a stupid person can have: arrogance and power. And history has established, time and again, that a stupid and arrogant man with power will never admit he is wrong.

Unfortunately this stupidity caused Bush to play directly into Al-Qaeda’s hands. Since terrorists have no Air Force or Navy, the opportune solution is to make their enemies come to them. Ironically many sycophantic Bush supporters have confirmed the effectiveness of this strategy by proclaiming, “Better to have terrorism in Iraq than in the United States.” Translated into real terms, this means that the Bush methodology for fighting the “war on terror” is to simply provide terrorists with alternative targets, namely American soldiers and Iraqi civilians.

Iraq was the ideal nation for Al-Qaeda to test such a strategy. The imperialist powers responsible for drawing Iraq’s borders demonstrated little concern for the religious and ethnic differences of the people who resided within, thus making Iraq a tinderbox of ethnic and religious hostilities. Even the most rudimentary tactician could have foreseen that destabilizing such a region directly increased the potential for civil war. In fact, one reason the Central Intelligence Agency (CIA) helped elevate the Ba’ath Party to power in Iraq was to ensure that Saddam Hussein’s brutality would keep political, ethnic and religious hostilities in check. Yet the puppeteers in the Bush dictatorship replaced this reality with the quixotic belief that the invasion and occupation of Iraq would actually have the opposite effect.

Now Americans, in their belated predictability, are recognizing this reality as well. A recent AP-Ipsos poll revealed that an overwhelming majority (seventy percent of Republicans and ninety percent of Democrats) believes civil war is inevitable in Iraq. Yet, as I read those numbers, I wondered how many people entertaining those viewpoints were just a few years ago attending pro-war rallies, elevating Bush, Cheney and other war criminals to the status of demigods, and obsequiously supporting the very liars, profiteers and hypocrites who led the nation into this quagmire in the first place.

So, on second thought, I retract my apology. Since George W. Bush’s combustible combination of stupidity, arrogance and power makes him susceptible to the Machiavellian machinations of evil men, he is, by proxy, evil as well.

Unfortunately it is an evil that has been rewarded and applauded by the American people. In fact, the entire creation of the Bush dictatorship was simply a test to gauge how much freedom, justice and democracy Americans would be willing to lose.

As I stated in previous Pravda.Ru articles, the greatest enemy of the plutocratic oligarchs was the Constitution, and is the Bill of Rights. The Constitution was destroyed during the Bush dictatorship’s coup of 2000 with the aid of corrupt election officials and an equally corrupt United States Supreme Court. This coup successfully obliterated the check-and-balance system, and transformed the legislative and judicial branches of government into handmaidens prostrating themselves before the executive branch.

The attacks of September 11th were designed to determine whether the American people would allow their fundamental rights and civil liberties to be replaced by unjust laws and inhuman barbarisms once considered anathema to America’s alleged respect for freedom and human rights - Patriot Acts, detentions without charge or trial, the denial of due process of law, illegal surveillance programs, torture and murder.

The build-up to the war against Iraq was a ploy intended to measure the gullibility of the American people and their willingness to obediently accept “great lies” while the plutocrats enriched themselves through wartime profiteering.

The equally corrupt election of 2004 was used to ascertain whether the adage “Americans are loath to change leaders during wartime” was true even though the legality of that war was in question, and even when that leader was directly responsible for the lies that started it. Sheepishly, Americans validated this adage.

Now all that is left to destroy is the Bill of Rights.

So I have a prediction: There will be another major terrorist attack on American soil before the 2008 presidential election. Like the September 11th attacks, this one will also be encouraged by the Bush dictatorship.

But the motive will be much more sinister. Instead of being exploited to divert attention from a corrupt election, or as a pretense to start an illegal war, the plutocratic oligarchs will use this attack as a ruse to appoint their puppet “President for Life.” Seizing upon the Bush dictatorship’s rhetoric that the war on terrorism will be a “lifelong” war, these oligarchs will announce to a panicked populace that a “lifelong” leader will be required to fight it. Then, shortly after this announcement, the Bush dictatorship will further manipulate the fear generated by this attack and place America under martial law, thereby eradicating the Bill of Rights altogether.

It is no coincidence that, as worldly power falls more and more into the hands of evil men, talk of the inevitability of Armageddon has increased. But if the end of the world is nigh, the cause will not be nuclear, chemical or biological weapons. They will only be the effect. The cause will be humankind’s terminal myopia that inexplicably, yet persistently, permits men of evil to obtain power in the first place.