Preparing for the Covid New Reality

Preparing for the Covid New Reality 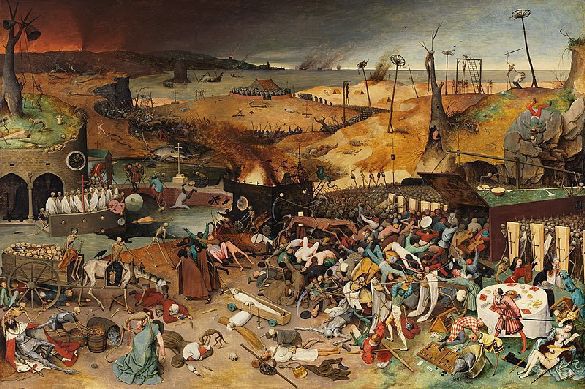 There is one simple conclusion to be drawn from the Covid-19 crisis: the human being as a species is incapable of dealing adequately with a global pandemic

Some of us had higher expectations of humankind this time around. I didn't. I have been covering pandemic events for decades. I covered SARS in 2002, Influenza A H1N1 in 2009, MERS since 2012, EVD in 2013-2016 and now this new one, Covid-19. Only the Influenza A ("Swine Flu") and Covid made it to global pandemic status, joining Hong Kong Flu (1968) and Asian Flu (1957) as global health crises which our grandparents will remember. In reporting the events after 2002, all I had to do was copy and paste large chunks of pieces I had written about SARS, basically because the policymakers followed the same guidelines: Advising "vigilance" and "reporting", not advising any travel or trade restrictions and watching the thing like a voyeur as it spread through the six pandemic stages until Voilà! We have a global pandemic, now who is going to make a mint out of the medication or vaccine?

The policymaking in certain countries has been utterly chaotic, to say the least. It is like watching a fox in the henhouse, a bull in a china shop or a hornets' nest, shaken and stirred. Some countries have only now realised that wearing masks is a good idea, others have been saying they have fewer cases because....erm.....they are conducting fewer tests. Countries like Portugal have been doing more testing than practically anyone, have been on top of the virus since day 1 but that merits the tourism sector a black-out from the UK, the country which until yesterday was flying to Spain where cases are sky-rocketing and where testing has been rolled back recently. No tests, no cases, the basis of the Excel Sheet Management protocol which forms government policy in the UK. Wow.

We are not going to speak about the failed attempt at liberalization by messrs. Trump and that Bolsonaro character in Brazil ("Everyone has to die some time, 80 per cent of the population is going to catch it, no chance, so face it like a man, for f*** sake, not like a boy") (Yes, he did actually say that, and yes he did use the F word, porra) where the virus is running out of control.

I have already spoken here about how to approach this (namely, if you stay at home, protect yourself, act with common sense and do not meet people who have it, you cannot catch it) and I have already said here that the worst affected are those who cannot stay at home because they have to go to work and they cannot drive or walk, they have to use public transportation. For these, face masks worn over the nose and mouth, not hanging from an ear or on the chin, visors, gloves and frequent disinfecting of the hands, not touching the face, will provide layers and layers of protection, making it far more difficult to catch the virus. But we have spoken about this before in this column.

Facing the facts and a new post-Covid reality

What we can do, is to face the facts and to prepare for a new reality, with Covid lurking behind every tree and use this as a trampoline for the next one coming. We remember the cousin of Covid-19, called MERS (Middle East Respiratory Syndrome) with its 34% mortality rate. We have not yet met potentially more lethal viruses hiding in the reservoirs of the Amazon and African and Indonesian rainforests, all being plundered by irresponsibility and sheer greed as we speak. Sudor Anglicus wiped out whole villages, in some outbreaks having a 50% mortality rate, in England, Ireland and the European Continent between 1485 and 1551 and then disappeared completely. Nobody knows what it was but it was horrific enough to underwrite the expression "Fine at lunchtime, dead by dinner". Basically, we control the environments which we create but we cannot control Nature. So apart from a second and third wave of Covid (multiple ripples rather than a tsunami - this will be financial and economic and social) there are far worse things out there waiting to pounce.

Starting at the beginning, are our education systems prepared for the new reality of having a highly contagious virus running among us for, possibly, years to come? MERS appeared in 2012 and there is still no vaccine or cure. Distance learning is doable for University students and secondary level students, the only challenge being to make sure all students have a computer at home that works, that has a microphone and a camera. The syllabus has to be tweaked to include practical and interactive assignments but it can be delivered and the student will learn extra soft skills such as organization, distance networking and responsibility. But what about primary level pupils? In my day you could say to a six-year-old "sit down, sit still, shut up and listen". The alternative was a thick ear. But today? The notion of sitting down for four hours listening to a teacher is alien to them and even if they were capable of it, which they are not, having minors studying at home implies a parent being present, or if they are lucky, a grandparent.

Which brings us to work. Are our workplaces, and our workers, prepared for distance working? It is difficult to imagine a worse time to be the owner of a firm or any kind of enterprise. The challenge is to juggle falling or zero revenue with social responsibility, meaning paying salaries and overheads, and for the worker, trying to make two-thirds of a salary pay the bills when 100 per cent is often not enough. The key point here is how flexible the fiscal authorities will be over the long term, whether they cut some slack for as long as it takes or whether they squeeze the tap and push enterprises under, resulting in a massive wave of unemployment and the ensuing social stresses downstream. More about that later.

It is becoming apparent that not everyone is for distance working and distance working is not for everybody. There are those who can establish their goals, organize themselves and meet them; there are those who need to be told what to do, otherwise they will multi-task, waste their time and spend all day writing messenges to their friends. Here, we are speaking about white-collar jobs, performed with a computer. As for blue-collar jobs or menial jobs, the worker has to go to a factory to work or to a house to clean it. Are public transportation systems safe enough for these people? Does legislation protect them?

In both cases, does the workplace have the flexibility to help the worker cope with multiple challenges, such as getting kids to school? Or what about if there is a case of Covid in the school and the place shuts down? Is the worker covered for days off work?

Social aspect and new synergies for the distanced workplace

Many are those sitting with their hair and beards running wild, staring at their ZOOM interlocutor with glaring, beady eyes through the screen looking like the Wild Man of Borneo while behind them, bedlam breaks loose, with six kids screaming up the walls, followed by the dog and the cat. And the canary. Many are those who take the elevator down to the garage to get some peace and quiet in the car. Some are close to desperation, others are already taking meds.

Can synergies be formed between enterprises and IT solutions and interior design providers which cater for home working, creating Zen spaces and also reformulating job descriptions/duties/contracts to give the worker the possibility and the space to face the new reality?

The easier everyone makes it for the worker, the less will be the social price that we pay tomorrow. We could lose half a generation of schoolchildren here, and we will reap what we sow not now, but in a decade or two. Without a full and directed adaptation of the workplace, and society as a whole, we will see exclusion, which brings with it marginalization, crime and social terrorism.

Our healthcare workers, we have seen, are heroes. So rather than ask why they were not properly equipped, yet money was available for submarines, let us make sure that they are always well supplied with Personal Protective Equipment from now on and let us all sit down and discuss the protocols which work with Covid, instead of bickering and making false claims that this medicine works better than the other, or does not work at all. Surely we can do better than this?

No don't tell me big bucks are involved and policymaking puts the bottom line above public health policies...

With increased stress on healthcare systems, comes individual responsibility and I know it isn't sexy to say it, but sooner or later personal accountability will come into play here. Two people go to hospital with Covid, one is terribly over-weight because (s)he does no exercise, binges on fast food, drinks three bottles of wine per day and takes drugs. The other has a perfect Body Mass Index, has a healthy diet, does a daily work-out and three ten-kilometer runs per week.

Need I expand my thought?

Here we have the greatest burden for families and households to bear, a crippling stone around the neck which takes up all the free time, energy and effort a person has, making sure people are controlled and under so much stress that they don't do anything to rock the boat. I am talking about the drama of owning a house/apartment or renting one. It is a huge slice of the cake cut out of a salary at the best of times, let alone in times of precariousness. Surely, having a home is a basic right? Or, it should be these days. It has been done before and it works. So why don't we think seriously about the State or Municipality providing accommodation, for free? That would be one huge step towards solving all the ills Covid has brought us.

In conclusion, and as I said, this piece is not only about Covid, it is about using Covid as a trampoline to plan adequately for something ten times worse, in the future. It could be as early as next year. We cannot do a lot of things but we can plan, which means coming together, working on common solutions and formulating common policies. Not bickering, blaming, name-calling and worrying whether there are Russians under the bed armed with red-hot pokers.

Time to get serious about this, because we are all in the same boat.