Roots of U.S. Racism: An Interview with Noam Chomsky

Roots of U.S. Racism: An Interview with Noam Chomsky 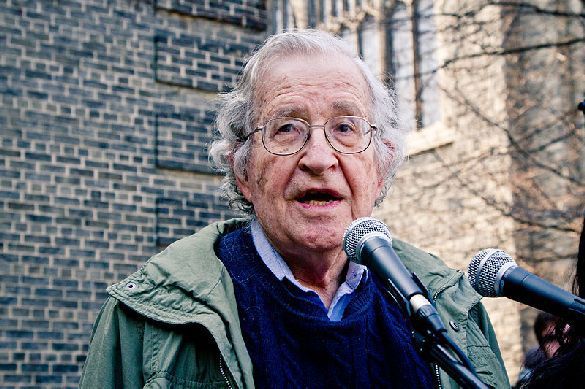 Not only discrimination but also the culture of violence is deep-rooted in the United States. Feed by the local elites, racial differences ends up to justify mass social inequality - another U.S. historic hallmark - and cheap workforce by the "social excedent."

The murder of George Floyd, a 46-year-old American black citizen by four white policemen in the streets of Minneapolis, on May 25, has been the missing event to sound the whistle of the American pressure cooker, once again opening up to the world the too hard U.S. social reality, the so-called "American exceptionalism."

The Brazilian Journalist Edu Montesanti, a Pravda.ru corrrespondent in South America, has talked once again to the world-renowned analyst Noam Chomsky. Far from seeing a solution from the U.S.  political class, Professor Doctor Chomsky points out "some small seeds of the solution in the reaction to the brutal Floyd murder," he says from his house in Tucson, Arizona, where he lives with his Brazilian wife Valeria.

As President Trump is angrily trying to stop the protests across the country, Doctor Chomsky observes that they reflect "the growing awareness of the racist pathology among at least parts of the population."

Political dissident, philosopher, sociologist, author of more than one hundred books, one of the founders of the field of cognitive science, considered the father of the modern linguistics, Professor Emeritus at Massachusetts Institute of Technology (MIT) and Laureate Professor at University of Arizona, in the following interview Doctor Chomsky, the world's most respected commentator, speak about the shocking killing of Floyd, the subsequent protests that have swept the United States for almost two weeks, the roots of racism in the North-American country, and how much all this can weaken - or favor - Donald Trump in the election in November.

Edu Montesanti: Professor Doctor Noam Chomsky, I have to thank you so very much for granting me an interview once again. I would love to find words to express my deep gratitude to you for this unspeakable honor.

Racial discrimination has been, once again, widely discussed now since George Floyd was killed in Minneapolis last week, a common crime by white policemen against Black and Afro-Americans in the history of the United States.

How much the US media, including the movie industry, US foreign policy based on the imposition through the use of force with much racism, too, the so-called American exceptionalism, and even the US education devoted to producing idiots as you once mentioned, cooperate for successive crimes like this to take place?

I mean the culture of dominance through violence; the minds of Americans have been bombarded, maybe first of all by US politicians who are used to acting violating the law, inside the country and abroad; they have no limits to achieving their goals, so in one's mind in America there is a natural thought, "why to be tolerant, to respect the law and differences?".

Noam Chomsky: The United States is a rare country that has been at war almost every year since the first day of its founding.

One reason for the American Revolution was that the British had barred invasion of "Indian country," the homelands of the many Indian nations beyond the Appalachian mountains. The colonists wanted to conquer and settle those territories, as did major land speculators like George Washington.

As soon as the British barrier was removed, the invasions began, pretty much wars of extermination as the leadership recognized. That persisted through the 19th century - and along the way, the US conquered half of Mexico. It goes on from there with hardly a break. Laments about Washington's "endless wars" in this millennium are somewhat misleading.

At the same time, the US instituted the most vicious system of slavery in human history. It was, crucially, race-based slavery, unlike most others, so the mark of slavery persists.

Formally, slavery ended after the civil war, and indeed Blacks had a decade of freedom, which they used very effectively. That ended with a North-South compact in 1877, which allowed the former slave states to do as they wished.

What they did was introduce "slavery by another name," the title of one of the best books on the topic. The device was to criminalize black life. The incarcerated black population became a wonderful workforce for agribusiness and the industrial revolution in the South - no worries about discipline, wages, workers' rights. The chain gangs are a familiar symbol.

That lasted pretty much until World War II, along with severe discrimination in the North. Then followed a period of formal freedom, but limited. For example, Federal Housing and support for higher education were denied to Blacks. By 1980, with Reagan, a new program of criminalization began, reaching to the present.

This form of "exceptionalism" cannot fail to leave its impact on American culture. Though free and progressive in many ways, American culture and society have not erased these deep stains, as is all too obvious in international behavior and domestic affairs.

This is not of course the way US history and society have been depicted in the educational system, media, and cultural institutions, though there have been important moves towards recognition of reality, largely traceable to the civilizing impact of 1960s activism and its aftermath.

We are seeing President Donald Trump much more concerned about jailing protesters, pressing like no other president before, governors to prosecute people who are taking to the streets, than a concern to see justice for the crime against Floyd, and to discuss solutions to issues such as violence, racism, and inequality in the US.

I would like to know your view on this, Doctor Chomsky... by the way, how much do you see, if so, President Trump himself responsible for the sentiment of hate that leads to crimes like the one committed in Minneapolis last week, considering his well-known sayings and doings, especially those related to Charlottesville events in 2018... how much has President Trump's posture, particularly, has exacerbated crimes like this?

And if you would like to add to your comment on the issue, I would mention something about the political conjecture especially the elections in November, President Trump's obsession it seems, an issue to him clearly above the pandemic and human lives: adding to the US shocking response to the novel coronavirus as you have said, Floyd's murder, and everything that is happening across the country since then, is paving the way for President Trump's farewell from the White House in the coming months, don't you think so?

I hope it is true, but it is not obvious.  He may in fact use the current protests over the police murder of George Floyd to his advantage, playing the law-and-order card that is second nature to brutal authoritarians.

There is no space to run through the record here, but Trump's demolition of the system of pandemic preparation that was in place, his annual defunding of health-related elements of the government, and his cancelling of programs in which US and Chinese scientists cooperated in investigating coronaviruses, all left the US singularly unprepared for the pandemic that scientists had been predicting.

This is over and above the neoliberal assault of 40 years that has shattered the general society while providing enormous to a tiny sector and greatly empowering predatory financial institutions and other parts of the corporate sector.

Trump's wrecking ball didn't stop there. When China provided all relevant information in mid-January, governments with some concern for their populations reacted, primarily in East Asia and Oceania, and by now have the situation pretty much under control. Others varied.

Trump's US is at the bottom of the barrel, sharing this distinction with Bolsonaro's Brazil. Trump is directly responsible for the deaths of tens of thousands of Americans, many more to come. Not surprisingly, he is flailing around desperately to find scapegoats for his crimes.

He retains the support of his primary constituency, extreme wealth and corporate power, whom he has served loyally. Also the support of a huge voting bloc of Evangelical Christians, along with relatively affluent rural and suburban whites, white supremacists, and some other sectors whom he has handled with the brilliance of a skilled confidence man - stabbing them in the back with his legislative programs while presenting himself as their loving savior.

This does not begin to touch Trump's malevolence. His most colossal crime is his dedication to destroying organized human life on earth in the near future in order to increase the profits of his prime constituency.  This is no exaggeration.


Martin Luther King, Jr. killing in 1968, which provoked protests similar to the ones we are seeing these days, hasn't stopped the drastic consequences of the deep racism in the United States. Neither the killing of Rodney King, a driver in Los Angeles in 1992 by the police that generated unrest across the country, nor Barack Obama's election, the first black president in the history of the US, has solved the issue, on the contrary.

Where does the solution lay, Professor Doctor Noam Chomsky?

We actually see some small seeds of the solution in the reaction to the brutal Floyd murder. After Rodney King's murder, the killers were freed by the courts. That led to a week of enormous protests in Los Angeles in which over 60 people were killed.

President George H. W. Bush called in the US military to restore order. There were reactions elsewhere, but protests were mostly limited to Los Angeles.

The reaction this time is very different. That reflects the growing awareness of the racist pathology among at least parts of the population.

There is a long way to go, but the core challenge is to continue and escalate this process - while fending off the inevitable efforts of Trump and his associates to restore an even harsher version of what came before.

Americas
Pentagon creates 60,000-strong army of spies
Americas
USA to sell Israel high-precision weapons worth $735 million
News from the Kremlin
High-ranking Russian officials must not own real estate in US and Czech Republic