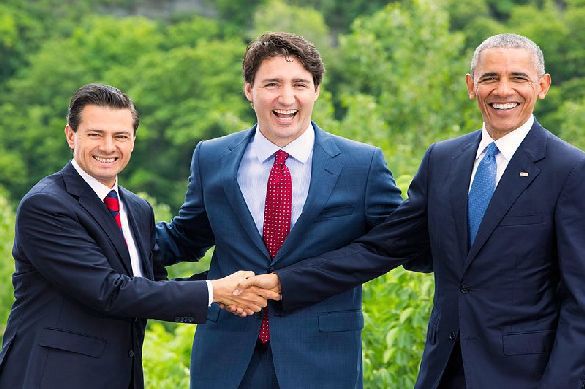 What does one expect from a leader? Rephrased, what would one do when faced with a crisis; call it national emergency? Moreover, what would that person do that would be in the best interests of the country's citizens?

Not talking nationalism here; let alone populism along U.S. President Trump's Administration. Although, to compare Justine Trudeau to the former head of state, has much merit. Just ask any Canadian, even ones that voted Conservative, who now have to endure the disaster of a Stoner's second term.

Will leave that discussion to another time...

No... What is at stake here, far as Canadians are concerned: Common sense. Alternatively, the dearth of it, as many would attest, after they - entire country, actually -- have suffered under the feckless, glorious boy-man shenanigans for 4 - 5 years. That is putting it mildly.

Trudope, as he is not so affectionately known, was on a mission. A UN mission to be explicit; doubt he was aware of it though; too busy partying and vacationing. Otherwise, wasting hardearned taxpayers' money. His handlers - mostly Leftist TDS afflicted liberals - had a high purpose in mind: Gain a seat on the UN Security Council; albeit it was temporary. Canada had competition though. Norway sought the same prestigious award. In re, Norway's Prime Minister, shadow-banned Dopey. Wherever he go; she show up; many times, moments later.

What is not so obvious is the deeper, wider context. Trudy - his girly name - is really a globalist at heart; even at the expense of Canadians. In addition, their overall welfare. He/she/it aims to please. No, not the Canadian 'people kind'.  Forget them... Trudope's allegiance is to his master: He is beholden to George Soros; thinks Soros is a genius; full of good ideas; just needs Canada's money to implement those; spread socialism around the world; universe, is the limit.

Knowing his past, fair to state, that Trudy, is no friend/ally of his neighbor to the south. He hates, U.S. President Trump. Much of his public 'discourse', towards 'The Donald' if you can call it that - Trudy cannot string together two monosyllable words without much difficulty swallowing - has been duplicitous. Doing so, he thinks he gains favor with Soros, and his globalist ilk, the likes of which include Macron, Merkel, even Xi Zinping, and other not so notable Commies.

Trudope's vitriol, towards strong nationalist leaders has no limits. He hates Russia's President, Vladimir Putin, with equal the vigor that he exhibits toward President Trump; blames the former for 'invading' Ukraine and 'annexing' already Russian territory, Crimea. If time/space permitted, I could chronicle the depths of Trudy's ineptitude on foreign affairs.

You ask, how did Canada's economy freeze?

Well, it did, both from natural phenomena; and from outside nefarious forces. While, Trudy vacationed - many Canadians remember that he was against the LNG pipeline in Canada's northern tundra, before he was 'for it'- certain native Indian bands took umbrage to the pipeline cutting through their traditional lands. Real injurious actions rode on top of that, let us say, covert insult. Local and national anarchists were quick to exploit the 'oversight'. As they say, 'Leftist goons never allow a national crisis go to waste'.

Law-abiding Canadians were the victim. Canada's entire transportation network, coast-to-coast was shut down by the unlawful - Canada's leftist media affectionately labeled them 'protestors' - seizure. Ports of entry, railways, road networks, and airlines all ground to a halt; while their leader, Trudy, continued to enjoy his time in the sun; not a care in the world.

What was his reaction when informed - through the international media - that Canada was held hostage by provocateurs - hooligans that did not have a smidgeon of Native blood - that flaunted their law breaking in the full presence of the police?

Weeks later, when his handlers managed to drag him back to his Prime Minister's pad, Trudope, finally emerged from hiding under his desk. Had this wholesome one-liner, which he spewed to the media: He - not the Parliament - will abide... By The Rule of law.

What! Some intrepid reporter, other than a liberal, should have pounced; jumped all over that. Called him out. "Mister Prime Minister... Do you understand what 'Rule of Law' means; that its very  premise is found in the basic tenet of sound governance: Public Safety is the first priority"!

Of course, no such reporter exists in Canada. Liberal leftists there control the national narrative. Spin it daily; in favor of their darling, Trudy. Who cannot be criticized. In addition, if one dares venture there, liberal goons will be quick to call you a hater. Maybe, even invoke the 'racist' card.

Now, Canada, like the entire world is faced with combating the Wuhan Corona virus.

Wish their good citizens much luck, especially with lame duck, Trudope, at the helm. Ahem...