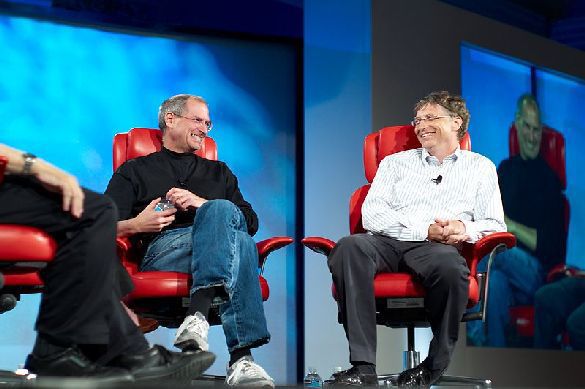 Remember the Macintosh; that gremlin looking clonesque PC by Apple Inc; or, should I say, the rodent looking robot that said, "Hello", to the whole wide world in the mid-80's? Well, if you still have tunnel vision - like many people do, today - then, this is a 'no brainer' right?

Before I get to that, we need to look back; dig a hole, so to speak; find the right context. That way, we can all get back to the future.

As many of you know, Steve Jobs was the 'whiz kid' of the 80's, regarding back yard computing. Jobs, was no regular guy, even if he took his Metamucil, each day. Fact is: Jobs was a pain-in-the-butt. He was the avowed enemy of the PC purists, like IBM, Hewlett Packard Inc. In addition, a whole host, make that Chinese legion of 'knockoff' clone makers felt the same way: They loathed him. When the time was ripe, without blinking an eye, or slanting away, each and every one of the 'in crowd' would not shirk, or shrink from taking a huge bite out of the proverbial 'apple'; if, and when that opportunity arose. Time and time, those opportunities did arise. For example, look at Samsung; the Android phone, is every bit as good, and at times, better than the iPhone.

Nevertheless, that is just human nature; since Adam's, and Steve's, er, Eve's time.

What was it that the pursuing posse was after; what fueled their ire; kindled their envy?

To answer that, we need to examine Apple, make that Job's, organizational culture. First, Jobs, was not alone at the top. He had competition; even of the stiff variety. It came in the form  of a stout fellow, Steve Wozniak. Unlike Jobs, who was a self-billed marketing 'genius', Wozniak, was what they called back then: a geek. Alternatively, a techie, bits-and-bites, kind of dude; so, he claimed.

Whereas, Jobs, had already seen the future, and knew what had to be done - go for the Dick Tracy type device, be it walkie-talkie watch, or phone - Wozniak, could/would not peer past his nose. Hence, he was stuck in his own ways; mired in the present; enamored by the PC culture that caused him to dote over the Apple IIe; which was nothing more than a high priced, yuppie looking clone PC box. Nothing more.

Yet, he was wrong. Forced to fall on his own sword, or empty chassis; when, fellow executive, Jobs, pulled rank and the red carpet from under him, and said: Nyet. Yet. Comrade. Less is more. Smaller is better! Closed architecture, is where it is at. End of story.

Of course, Job's prophetic wisdom proved correct. We all know that. Steve went onwards, and upward. Soon, with Apple's advent of cutting edge products like iPod, iPad, and the flagship, iPhone, the entire PC establishment, maybe the whole world, was turned upside-down, on its head. Even Industry Windows Captain, Bill Gates, was forced to convulse; admit partial market surrender. He was shaken. But, not stirred. Ostensibly, not enough so, that super-geek Gates would fall behind the computing curve; he failed to invent his own smart phone until decades later. That happened while the internet was set ablaze with the likes of Google, and their monster search engine - by the way, Jobs, though unwittingly by his own admission, helped launch the beast - and by extension, Yahoo. Yeah, that Yahoo!

Yes, rampaging Google, or Alphabet Inc., as it is so affectionately known today - among liberals - dovetails in the script. However, I will leave that tale of the tech giant rising before our very eyes, to another time.

You ask: How does Steve Jobs role and business acumen fit with the Globalists' future vision? Well, again, Jobs may have unwittingly fallen victim to their wiles. The wiles being U.S. and other transnational corporations moving their entire manufacturing, even intellectual properties to, you guessed it: China. One can add insult to injury. Chinese, in no time flat, even managed to develop their own version of Jobs, favorite pet project, the iPhone. Now, with the advent of 5G, Huawei is well positioned to leap frog, industry titan Apple. It is a done deal.

Think of it this way: Jobs provided the portal. Globalists, always at the ready to exploit real geeks, and just about anyone who likes selfies - and who does not - poured in the breach. They will handle it/us from here on in. Not what we want... Rather, Big Daddy knows, what is in our best interests. So far, I do not see many complaining.

Where is Steve Wozniak? Last, I heard: cruising the Caribbean after he cashed in his Apple chips, for the life of a leisurely, yachting geek, in search of nothing.

Hey, someone big had to lead the way! Back to the future.