Bolivia: No Election Fraud, but a Color Revolution

Bolivia: No Election Fraud, but a Color Revolution 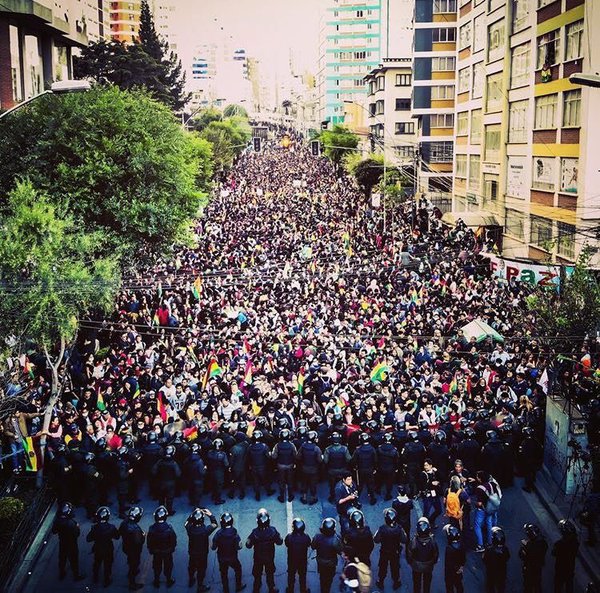 OAS hasn't presented any evidence that there was a fraud, as a U.S. and a European independent institution have both concluded that Almagro manipulated data, to make possible the coup against Morales

No Evidence that Bolivian Election Results Were Affected by Irregularities or Fraud, Statistical Analysis Shows, is the title of a Center for Economic and Policy Research (CEPR) study released on November 8.

Five days after it, on November 15 the Political Scientist at the University of Michigan Walter Mebane considered one of the world's most renowned experts in electoral fraud, released a report titled Evidence against Fraudulent Votes Being Decisive in the Bolivia 2019 Election. Mebane pointed out that the Organization of the American States (OAS) said it found irregularities in 274 electoral minutes, out of a total of 34,551. That is, 0.22% of the total.

According to Mebane, it does not differ much from the pattern seen in other countries' elections such as Honduras, Turkey, Russia, Austria, and Wisconsin. "Even removing fraudulent votes, MAS (Movement toward Socialism, Evo's party) has an advantage over ten percent," added the U.S. researcher.

The OAS report itself, in addition to recording that nonsense conclusion, admits that its work focused only on the regions where the candidate to re-election, Evo Morales, had been victorious. The organization headed by the Uruguayan Luis Almagro "did not provide evidence" to support any fraud, on the contrary, it made serious procedural errors in the audit, concluded researchers and analysts at the CEPR, based in Washington D.C.

"Examination finds tally sheets consistent with Evo Morales's first-round victory," says the study achieved by U.S., European and Asian experts. That coincides with independent poll surveys previous to Bolivia elections which scared the local upper classes, opposition to the first indigenous president in Bolivia's history. Polls that generated a deep hysteria and a witch hunt in the South American country, on the elections' eve.

CEPR researchers and analysts noted that the rapid count results closely matched the official count which, according to them, "is legally binding and completely transparent" in Bolivia. "Contrary to a post-election narrative that was supported without evidence by the OAS Electoral Observation Mission, statistical analysis shows that it was predictable that Morales would obtain a first-round win, based on the results of the first 83.85 percent of votes in a rapid count that showed Morales leading runner-up Carlos Mesa, by less than 10 points," the study pointed out.

The co-director of the CEPR, Mark Weisbrot, said that it was very unusual and highly questionable for the OAS to issue a so serious statement, without providing any evidence. It raises "disturbing questions about the organization's commitment to impartial, professional electoral observation," he added.

While the results found out by CEPR coincides with Bolivia's Tribunal Electoral, the OAS has a vast history of working according to U.S. interests in Latin America, strongly boycotting progressive governments. "The OAS is nothing more than a ministry of Yankee colonies," used to say, Fidel Castro.

What is said by the Bolivian opposition, too, is that hundreds of ballots and boxes have been found in trashes shortly after the election. Pictures and videos, which by themselves never prove anything, of course, have been spread while not even a single ballot has been presented to the Bolivian court.

Luis Almagro himself, OAS Secretary-General, is a deplorable guy who, always knelt before the Empire, does not hesitate in using his office to spread lies advocating for Uncle Sam's coups, murderers, plunders, and invasions across the world's richest region in biodiversity, that is, Latin America.

If once again Mr. Almagro writes his name in Latin America's blacklist, he is not alone: the Bolivian oligarchy along with the Catholic and Evangelical churches, the European Union, the U.S. (listen to audio 15, released last October 9 by an anonymous source to several media outlets), and Brazil's Jair Bolsonaro, Brazilian Evangelical Churches and Israel (audio 5).

These audios confirm, too, that the wave of violent protests against Evo Morales after the Bolivia election was not spontaneous, but previous, carefully, foreign-funded events called Color Revolution idealized by U.S. citizen Gene Sharp to overthrow governments across the world, contrary to the Washington regime's interests.

The Bolivian upper classes themselves were always well-aware that Evo Morales would legitimately win the election, though they spent all the election's eve hysterically shouting that "everything is already prepared for Evo to win, the election will be stolen".

An example is a WhatsApp profiles' message widely spread in Santa Cruz de la Sierra by those classes which said "mourning to the ignorance of my people," referring to the majority of the Bolivians across the country who, they knew, would vote for Evo.

An upper-class seamstress and nurse from Santa Cruz de la Sierra who owns a store downtown among the local oligarchy who posted such a WhatsApp message, depicts the Bolivian situation. Like the class she belongs to, she pointed out to an inverted scenario she was trying to construct. And reveal other pillars of the Color Revolution, besides manipulation and disinformation which reign in Bolivia these times.

She voted for Carlos Mesa, "who was president for only six months! One cannot do anything in just six months!" she told Pravda.ru on the eve of the election. But her candidate was one year and a half in the Presidency. She ignores this fact.

Telling her somethings about Bolivia at that time, some weeks later, it was mentioned that her country was experiencing economic growth during Evo Morales' years. She angrily interrupted Pravda.ru, to exclaim to her perplexed Templar Knights leaders, then: "Has Bolivia economically grown?!". Her country, with Evo in the Presidency, was economically growing for years like no other in Latin America.

Talking later to a stationary store owner in the same zone when the country was already stuck after the election, the white man originally from Santa Cruz de la Sierra said, "what's happening in Bolivia is a movement carried out by Santa Cruz's elite, historically discriminatory."

He told Pravda.ru that what was taking place was not a popular uprising. "See how many roads Evo has constructed. He has granted workers' rights as no other president did before. The minimum wage has had real gains in the last years. Our economy is growing like never before. Our police never had good automobiles, as they have now. Evo has started to industrialize Bolivia, what no one did in our history."

Last Saturday, November 16, Evo Morales' Vice-President Álvaro García Linera granted an interview to Buenos Aires' radio AM 750, saying that the roots of the coup d'état in Bolivia which forced Evo to resign, have racist motivations especially against the indigenous peoples of his country.

"They are killing peasants and indigenous people. In the five days of the government of the impostor Jeanine Áñez, 18 dead people have already been counted, all of them poor people. It's a government that drips blood."