All of Us Are Evo!

Never the Plurinational Bolivia Had Had Her People's Face in the Presidency, Like with Evo Morales 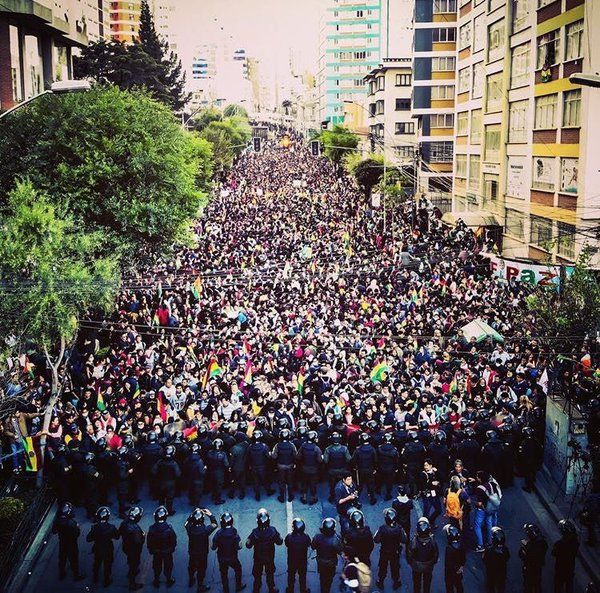 Many think - or whenever it is of their interest - that a president of a nation is omniscient and even omnipotent. They are not. Never will be.

There are so very many points to be discussed about Estado Plurinacional de Bolivia - the Plurinational State of Bolivia dreamed by Evo. Back again to the Republic of Bolivia - a US backyard.

Plurinational Bolivia that recognized as never before in two centuries indigenous rights, their language, their habits and general beliefs and way of life. At last, Mother Land as Evo is used to saying.

Plurinational Bolivia had, in Evo's years, many indigenous languages dictionaries and didact books, as a consequence of the recognition and appreciation of the original peoples.

Plurinational Bolivia always willing, as much as possible if it depended on Evo, to embrace foreigners and refugees.

Plurinational Bolivia of Evo's dreams, the world's richest land: there is no any kind of product, all over the world, that cannot be produced in Bolivia: everything that there is in the whole world, there is in Evo's Bolivia and in much more variety, and some native ones until recently unknown worldwide, as quinoa, the richest food in the world.

The Plurinaciotional Bolivia, the most stolen land in Latin America in the last five centuries. Which includes the "independence" times, plundered by the five neighbors - Argentina, Brazil, Chile, Paraguay, and Peru.

Evo not only lifted two million people out of extreme poverty, as he was industrializing the country.

Plurinational Bolivia, for several years, had experienced an unprecedented economic growth - the biggest economic growth in all of Latin America, in the middle of the world crisis.

Plurinational Bolivia was a nation where workers' rights were guaranteed.

Plurinational Bolivia had been respected abroad, like never before in history.

Plurinational Bolivia exterminated some gruesome white dreamers wishes of separating their land from Bolivia: Evo was trying to bring back the sense that everybody who was born in this land, is Bolivian. The sense that all of them have a common history.

Plurinational Bolivia, a title that used to anger the local withe elite so very much, is being back to just a Republic of Bolivia, not due to any Evo's political and/or economic mistakes - his antecessors have a vast list of incompetence and corruption -, but it is because of Evo's affront in trying to make Bolivia a less unequal country, unforgivable for the local elite, and for the most terrorist Empire in history which Evo fought face-to-face.

Plurinational Bolivia, in the person of Evo, faced the owners of this dark world. To finish his last days at the People's Great House almost alone, politically saying - but backed by his multitudes, mostly composed by indigenous people, peasants, and workers in general.

With Evo in the Presidency, Bolivia had hope. Never before in history, Bolivia had a president so familiar to her people - Evo, his people's face.

Another regression in Bolivia's and Latin America's history. For how long that hope is broken, one does not know. Dark times await Bolivia.

All of us are Evo!