Europe is clearly having serious issues with internal security and facts speak for themselves; in a period of time that goes from September 17th to October 9th, France, Italy and Germany have seen a series of attacks that cannot avoid raising concerns. 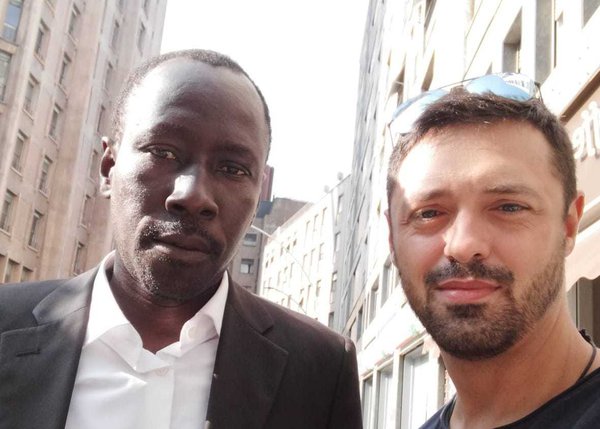 Author with Samba Doagne, the Sengalese man who took down the Yemeni attacker in Milans central train station

On September 17th a Yemeni refugee armed with a pair of scissors attacked a military unit stationed outside Milan's Central train station while yelling "Allahu akbar", wounding a soldier belonging to the "Alpini" infantry corps before being taken down and blocked by 51 year-old Senegalese citizen Diagne Samba, who was just passing nearby. A video shot by Russian tourists as well as local witnesses have exposed how the unit appeared paralyzed during the attack and some even raised the question of what would have happened if Mr. Diagne hadn't been there.

Eventually it turned out that the 23 year-old Yemeni was already known to Italian authorities as he had already created problems the previous night by climbing a roof and threatening other refugees with a pen. However the following day he was free to wonder around and attack the units patrolling the station. In his phone the investigators found videos of the war in Yemen.

On October 3rd a French police employee originally from the Martinique killed four people and wounded two at the Paris police headquarters before being shot by an agent. It turned out that the attacker, identified as Mickael Harpon, had converted to Islam in 2008 and was close to Salafi and jihadist individuals. Paradoxically, Harpon was an employee for the informatic unit of the Drpp, the police intelligence unit, which means that he had access to confidential information regarding radicalized individuals. The perfect infiltrator.

As the French Minister of Interior, Cristophe Castaner, quickly rushed to define Harpon "a model employee", the attacker's colleagues pointed out a different version, describing him as "strange", "unhappy with his job position" and some even claimed that he had celebrated after the 2015 Charlie Hebdo attack. As if it wasn't enough, after the attack, the police found a usb key belonging to Harpon which contained sensitive data on his colleagues, jihadist propaganda videos and images of beheadings. The usb key was found in Harpon's office inside the police headquarter.

On the same day in the Italian central city of Fermo a Nigerian citizen armed with a machete cruised the streets threatening drivers and pedestrians before being arrested by the police. The scene was caught on video.

The following day in the Italian border-city of Trieste two police officers were disarmed and murdered with their own weapons by a Dominican immigrant, inside the Trieste central police station, before being wounded and arrested by other officers. The attacker, identified as 29 year-old Alejandro Meran, had been arrested earlier in the day for the theft of a scooter. According to the reconstruction of the event, Meran (who had not been handcuffed) asked to go to the bathroom and was escorted by only one agent who was suddenly attacked and shot with his own handgun; Meran then fatally shot another agent and opened fire inside the police headquarter before fleeing to the street where he ended his escape after being shot and wounded by other police officers.

On October 8th a 32 year-old Syrian refugee stole a truck and crashed it against motorists waiting in line in the German city of Limburg. The individual was already known to authorities for drug offences.

The following day a neo-Nazi identified as 27 year-old Stephane Balliet attacked a synagogue in the east German city of Halle while the Jewish community was celebrating the day of Yom Kippur, killing two worshippers. The death toll could have been much higher if the synagogue entrance door hadn't been secured from the inside.

Six different attacks, in a timeline of 23 days, involving three major EU countries. A clear sign that something is not working within Europe's security machine. These attacks bring to surface a series of significant security failures such as the infiltration of an Islamist extremist within a sensitive intelligence structure in France (let's not forget that the infiltration of Islamist extremists and jihadists inside the French public sector, including law enforcement, is a current issue that is alarming the institutional arena). Regarding the Halle synagogue attack, the German authorities clearly failed the preventive measures even though it is well known that the Yom Kippur is a sensitive day for potential terror attacks against the Jewish community. The only reason that prevented a massacre is the fact that the synagogue had a strong ironclad door that had been locked from the inside.

Then there are three cases involving immigrants, in Italy and Germany, three cases that emphasize how the filters to select those who are entering the EU are simply not working and that is obviously no surprise as the immigrants keep flowing into Europe from all directions without any type of effective selection process, as facts clearly demonstrate.

In addition, the two Italian cases show a lack of ability by Italian law enforcers and military units in dealing with threats, specifically in the Milan's Central station attack against a military unit, where the attacker was taken down by a 51-year old Senegalese man. What would have happened if he hadn't been there?

It is evident that EU's technocrats are unable to provide proper solutions to the security needs of the citizens as crime, social tension and terror threats are on the rise. Such a situation can only provide more votes for the right-wing parties as European feel betrayed by their own institutions and this process will hardly be halted unless the EU comes up with immediate solutions, something that is unlikely to happen in the short-medium term.