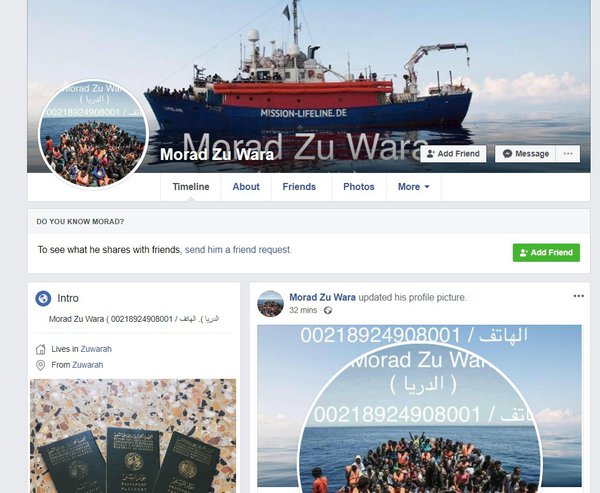 Libyan human traffickers use Facebook to advertise themselves. Unfortunately, it's not a joke but the sad truth. One specific case has recently caught the attention of the Italian media as an individual identified as "Haj Murad" was contacted by phone by journalists of the Italian TV show "Stasera Italia" ("Tonight Italy").

The trafficker did not hesitate to explain how each individual has to pay 1300 euros in order to board a boat bound for Italy and even stated that his boats are made of wood, with a powerful Yamaha engine and they can load up to 25 people.

As if it wasn't enough, Mr. Murad was also advertising his activity with at least two Facebook pages, both by the name "Murad Zu Wara"; a clear reference to the Libyan port city of Zuwara, located near the Tunisian border and a well-known hotspot for human traffickers.

The city of Zuwara is currently siding with the Islamist government in Tripoli in the fight against general Khalifa Haftar.

On of Murad's Facebook profiles was deactivated as the media case boomed. However, the material exposed was previously saved as it showed a boat full of immigrants as a profile photo and on top of it there was a phone number that had to be called if interested in departing on a boat.

The profile's cover photo showed the German NGO boat "Lifeline" that was blocked by Maltese authorities in June 2018 after having sailed to Malta with 230 illegals on board while another photo showed three north African passports with the same phone number to call.

The profile had been active until the end of March 2019 before being deactivated. However, a second profile, with the same name, has been spotted with the same phone number and similar graphic features showing a beach. Now, this profile is still active today.

It is very likely that the human traffickers in Zuwara and other ports of Libya are waiting for the summer weather to load their boats full of immigrants with the hope that some NGO will pick them up and bring them to Europe, as it just occurred with the German NGO boat "Seawatch 3" as it carried 49 immigrants to the Sicilian island of Lampedusa despite the prohibition issued by the Italian Ministry of Interior Affairs of entering Italian waters, generating an international controversy.