Final assault on the backyard

The era Obama is over, and with it the line of reconciliation with Latin America: the exceptionals who wrote Trump's foreign agenda want the backyard back. 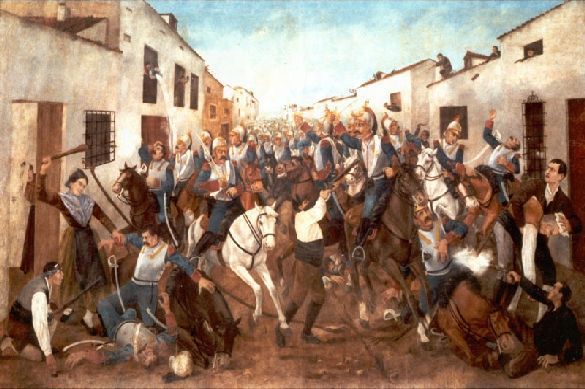 In 1823 John Quincy Adams formulated for the then president James Monroe what historians believe is the first theoretical manifestation of American imperialism: the Monroe doctrine. On the basis of this doctrine, the United States would have arrogated, from that moment on, the right to meddle in the internal affairs of the continent, strongly opposing any attempt on the European side to do the same. Latin America was soon renamed the backyard, a territory in which the presence of sovereign and independent states was considered a historical accident that can only be remedied through an ingesting, continuous and suffocating presence.

The coup d'etat driven to bring down uncomfortable governments began as early as the last quarter of the nineteenth century, often with the help of major multinational companies with lucrative deals, such as the United Fruit Company. With the advent of the Cold War, the US pressure on the subcontinent became even more insidious and violent, manifesting itself in bloody coup, like the Chilean coup of 1973, decades-long civil wars, such as the Nicaraguan and Guatemalan, and fierce military dictatorships such as that of Augustus Pinochet in Chile, the regime of gorillas in Brazil, and the so-called national reorganization process in Argentina. Hundreds of thousands of victims of the North American longa manus on what Pablo Neruda had renamed the "battered continent".

Only one country has survived the horrors of the Condor operation: Cuba, but at a very high social and economic cost. Without the continued support of allied countries, such as Russia and China, the country would have been suffocated for decades under the blows of the harsh embargo and international sanctions, and has remained stuck in a socio-economic limbo to which not even semi-autarky, credit and foreign strategic resources have been able to remedy.

The end of the Cold War and the emergence of new priorities from the Balkans, Asia and North Africa allow the sub-continent's political background to reorganize and attempt a new anti-imperialist assault. It is thus that in the context of the gradual end of anti-communist containment (hence of military dictatorships and civil wars), the revolutionary left is able to establish itself as party in numerous countries and obtain political power thanks to the vote of millions of citizens tired of the submission suffered in previous decades.

Nicaragua, Ecuador, Brazil, Venezuela and Bolivia become the heart of the so-called "new left", governed for decades by parties aimed at the construction of what former Ecuadorian president Rafael Correa called the socialism of the 21st century. In 2004 the governments of Venezuela and Cuba gave life to the Bolivarian Alliance for the Americas (ALBA), in which later Ecuador and Nicaragua took over. At the same time one of the dreams of Bush Jr., the free trade area of ​​the Americas (ALCA), was shipwrecked by opposition from countries led by left-wing clusters, headed by Lula's Brazil.

Also for Barack Obama, the priority remains the war on terrorism in the Middle East and Africa inaugurated by the predecessor, which is intensified, eventually degenerating into a struggle for the fall of hostile regimes through pilot revolutions, the Arab springs, and military interventions, such as in Libya.

Apart from the belligerence in the Middle East and the harshness towards Russia, Obama has nevertheless shown a willingness for real change with regard to several geopolitical theaters, such as China, the European Union, Iran and Latin America. A change of course revealed above all in the normalization of relations with Cuba and in the historic meeting with Hugo Chavez in 2009.

But the victory of Donald Trump has brought to power the most radical ideological current in the United States: that of the neoconservatives, exceptionalists of the new century that mixing messianism, fatalism and chauvinism, still see in the United States that empire of freedom theorized by Thomas Jefferson who, guided by its manifest destiny, has the historical and divine mission of spreading civilization in the world. Resuming the use of religious references so dear to Bush, father and son, and to Republican politicians in general, Trump has adopted a foreign agenda that until the election he promised the electorate he would not follow.

With the exception of some strategic retreats, dictated by pragmatic reasons and greater urgencies, Trump is leading international relations towards chaos, with the aim of nullifying the openness to the multipolarism of the Obama era and realizing that "Make America Great Again" in the affirmation of a United States-led unipolar world.

Looking away from lost theaters like Syria and Afghanistan means having more resources to devote to theaters in which the power of money, sanctions and the military instrument can still turn their fate in Washington's favor. And this is the case of Latin America: a region neglected by Bush Jr and even more by Obama, but which must be brought back into the US sphere of influence for the purposes of world hegemony.

It is not possible to imagine being able to control the dynamics of a continent overseas when you are not able to control those inside your own and this in the White House they know it well. The arrest of Lula, the fall of Brazil on the brink of the quasi-civil war and the rise of Jair Bolsonaro are events guided by the same thread and that, only now, can be read and understood thanks to a proper detachment.

The reconquest of America had to start from Brazil, the first regional power, to then go through the last pockets of anti-American resistance still present, namely: Venezuela, Cuba, Nicaragua, Bolivia.

Cuba is suffocated by the nightmare recession, thanks to the cancellation of the normalization agreements signed with Obama and the entry into force of new sanctions, against the backdrop of a difficult transition to post-castrism and the absence of statesmen of Fidel Castro's caliber. Nicaragua has been plagued by civil war since last April, up to now more than 500 dead and 3 thousand wounded, and it has also been the subject of new sanctions. Bolivia has so far kept a low profile, knowing that every wrong step could make it the next one to end up in the US viewfinder. But anti-imperialist rhetoric and anti-Americanism continue to permeate the political discourse, and the rumors are growing stronger about the opening of a Bolivian front in due time. However, it is Venezuela, Trump's true objective, and it is not just a question of extending his hands on the most important oil reserves in the world.

In Venezuela four games are played at the same time: China, Russia, Iran, the Latin American revolutionary left. To make Maduro fall, and consequently the economic system built by the Chavism, means in fact to hit hard China, which is the main investor in the Venezuelan economy and oil sector; Russia, which has exploited Bolivarian anti-Americanism as a bridgehead to revitalize a small sphere of influence in the region; Iran, which has transformed Caracas into one of Hezbollah's main operating points (now present in every Latin American country and involved in both intelligence and illicit trafficking), and the dying revolutionary left.

A new leader, perhaps an intrinsically pro-American as Bolsonaro, would start a deep transformation of the country, according to the dictates of Washington, significantly reducing the presence of China, Russia and Iran and cutting definitively with Nicaragua, Bolivia and Cuba - three countries whose economic collapse is so far avoided thanks to Venezuelan oil. In an attempt to push Russia and China to abandon Maduro, the self-proclaimed president Juan Guaidò declared that he alone would be able to repay the debts incurred by Venezuela with the two countries, but these are sentences of circumstance dictated by strategic reasons.

The true promises of Guaido that we must consider, to understand what direction the country will take if the Chavism should fall, are in fact the following: the privatization of the oil industry, a new diplomatic season in the name of close and friendly relations with the United States and Israel.

Maduro does not possess the same charisma of the predecessor, the economic war accompanied by the bad management of national wealth has reduced large levels of the population to the extreme and, in addition, the White House want back their own backyard. Because of these reasons, it is not known how much Maduro will manage to remain in power, while it is certain that long years of economic suffering are expected for the Venezuelan people.

Even if Ortega should fall in Nicaragua, since it is not a vital country for the stability of the axis of the revolutionary left, Cuba and Venezuela could still resist. But the fall of one of the two, or both, would sanction the definitive reconquest of Latin America by the United States and, with it, the possibility to concentrate with every available means on the other fronts that hinder the dream of a new American century: China, Russia and Iran.