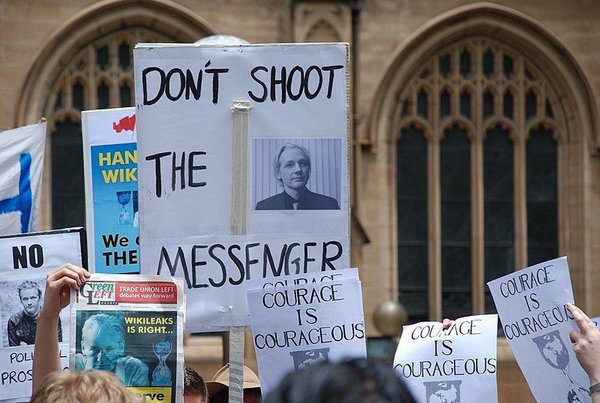 WikiLeaks' founder "is a hero, not a criminal," says British human rights activist Peter Tatchell, for whom Assange should never be tried: "The US government and military must be tried."

According to Tatchell, Assange on trial would undermine freedom of information, "important human rights principles."

Based in London, Tatchell questions why The Guardian and The New York Times, which published Assange's revelations, are not charged with the Australian journalist. "The diminution of a vigilant, probing media weakens an important check and balance on the Washington elite," states the Peter Tatchell Foundation's founder.

Below, the full interview with Peter Tatchell about the Assange imminent extradition to the United States.

Edu Montesanti: Accused of espionage, Julian Assange's trial in a U.S. court is imminent. WikiLeaks' founder is considered by those who accuse him, stuck in a quagmire of lawlessness, a"threatening" to US national security, and of "undermining" its democratic processes. What are your thoughts on this, Peter?

Peter Tatchell: We know that a secret grand jury was convened years ago in the wake of WikiLeaks revelations, that highlighted US war crimes and government deceptions and cover-ups. The intention is to charge Assange with serious offenses that are likely to result in him being jailed for 30 years to life.

Trump administration officials have admitted that prosecuting Assange is a major legal priority. They are out to get him.

The truth is that Assange performed a great public service, by revealing US human rights abuses in Iraq and Afghanistan.

He's a hero, not a criminal.

Edu Montesanti: What would Assange condemnation mean to journalism and free expression, and even the fight against imperialism and corruption? By the way, Peter, isn't is a bitter irony that those who have committed several terrible crimes all over the world, and against humanity without any accountability, trumpet law enforcement in Assange case now, the whistleblower of such crimes? The U.S. has spied on the whole world, seeking to condemn Assange now for having proved exactly which Washington, without any evidence, hysterically accuses the Kremlin, for instance...

Peter Tatchell: Assange published revelations by whistle-blower Chelsea Manning. So did the Guardian newspaper in London, and the New York Times. Why is Assange being singled out for prosecution but not the two newspapers?

Freedom of information and media freedom are important human rights principles, which are being undermined by the plan to put Assange on trial in the US and to lock him up for decades.

It is the US government and military that should be on trial, not Assange.

Edu Montesanti: Peter, I firmly believe that the mainstream media plays an important, and criminal role on Assange's current situation at a risk of being arrested, as the world media has ignored WikiLeaks' founder, and his revelations... or the corporate media has not given him much importance, as his revelations require. Let us remember that the German magazine Der Spiegel has reported years ago that many European "journalists" are CIA assets, which is also true in my region, Latin America. How do you evaluate the mainstream media coverage on WikiLeaks through years, and how much is it "guilty," let us put this way, what can you say about media responsibility for Assange's fate now?

Peter Tatchell: Much of the Western media has failed to fully report on the dire restrictions on Assange in the Ecuadorean Embassy in London, which are similar to the restrictions imposed on prisoners in maximum security jails. Yet Assange has never been charged, let alone convicted, of any crime.

The media has mostly failed to hold to account the US government and armed forces for the human rights violations revealed by Assange. This is damaging to democracy.

The diminution of a vigilant, probing media weakens an important check and balance on the Washington elite.