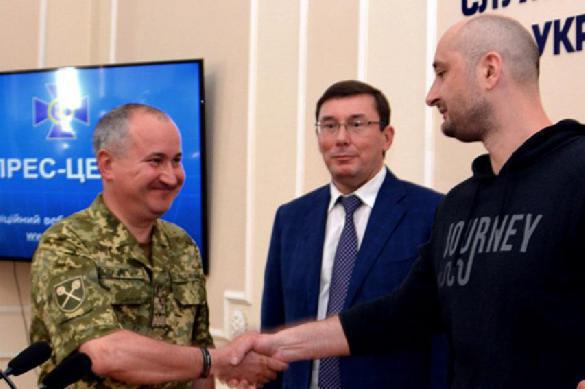 Kiev's Poroshenko regime is a dagger targeting Russia. It's responsible for horrendous human rights abuses, along with waging war on its own people - hostile toward anyone opposing its illegitimate fascist rule, reviled by most Ukrainians.

Washington and Britain have been arming and training the regime's forces for war on Donbass. Aggression orchestrated by the Trump and Theresa May regimes on its people appears to be imminent.

Further provocations against Russia are likely. According to the Donetsk People's Republic (DPR) deputy chief of staff Eduard Basurin, thousands of Ukrainian forces, heavily armed with tanks, rocket launchers, and artillery are mobilized for war.

He believes it's coming on December 14, according to (likely Russian) intelligence reports - beginning with an artillery bombardment of Donbass, followed by an attempted invasion.

Kiev's aggression may be preceded by a false flag incident in Ukrainian-controlled Mariupol - targeting a metallurgical plant where large amounts of ammonia are stored. Releasing it on city residents would be used as a pretext to attack Donbass.

According to Basurin, Ukrainian brigades aim to reach the Donetsk People's Republic border in 24 hours following the commencement of hostilities, adding:

"To develop the success of the offensive and cover up the offensive units of the 79th brigade, it is planned to launch the second echelon - the 56th infantry brigade from the Primorskoye/Shevchenko line in the direction of the Klinkino settlement."

"The terrorist attack committed by the Ukrainian special services in Mariupol will serve as a pretext for armed aggression."

"A few days before the planned offensive, one of the industrial enterprises will be undermining the storage of chemicals," according to intelligence reports.

The Saker published the following information about what appears imminent, Basurin explaining it in detail as follows:

"I would like to make the following statement. Our intelligence obtained irrefutable evidence about the Armed Forces of Ukraine AFU preparation to attack us at the direction of Mariupol. The information obtained from reliable sources fully reveals the plans of the Ukrainian security forces.

The purpose of this planned attack is to seize the territory of Novoazovsky and Telmanovsky districts and establish control over the section of the border between the DPR and Russia in the area of villages Konkovo and Kholodnoye.

The enemy offensive strike group has been already formed in total of more than 12 thousand people. It's concentrated along the line of contact near the village of Novotroitskoe, Shirokino, and Rovnopol.

The strike group consists of more than 50 tanks, 40 multiple launch rocket systems, 180 guns and mortars, all are concentrated here at this location.

The first echelon consists of the 128th Mountain Assault and 79th Assault brigades. The second echelon includes the 56th Infantry Brigade and the 36th Marine Brigade.

The basis of the artillery group consists of two divisions of The 27th Rocket Artillery Brigade 'Sumy' and a rocket division of the 15th artillery regiment.

In addition, 12 units of MLRS 'Smerch' of the 40th Artillery Brigade had been urgently transferred to the area of the village Volodarskoye.

In the reserve of this strike group tactical group 'Mariupol' is deployed consisting of the 73rd Naval Special Purpose Center from Ochakiv (the US Navy base)  of about 500 troops, in addition to two self-propelled howitzer battalions of the 1st and 406th Artillery Brigades.

The functions of a detachments assigned to the (Nazi-infested) bandits of the Azov regiment.

According to the plan of the Ukrainian command, on the morning of December 14th, after artillery preparation, the advance elements of the 128th  and 79th  brigades will to go on the offensive from the line of Granite - Shirokino in the direction of village Klinkino with the task to get to the state border of the DPR near villages Konkovo and Holodnoe, by the end of December 15th.

For further development of this offensive operation and to cover the advancing units of the 79th  Brigade, the second echelon of this strike group consisting the 56th  infantry brigade is planed to enter the battle at the direction of Primorskoe - Shevchenko in the direction of the village Klinkino.

To disrupt the command and operational control of our troops, possible subversive actions will be carried out by the forces of the 'Mariupol' tactical group.

After completion of the operation on the occupied territory, the forces of the Nazi regiment  'Azov' and also raid units of the 36th brigade of the Marine corps, it is planned to conduct ethnic cleansing of the occupied villages from 'undesirable...elements" and those opponents of the Ukrainian occupation.

The command of this criminal enterprise assigned to a war criminal Moisuk, who has been bestowed upon a rank of general on December 6th for his dedication to Poroshenko.

As an excuse for this armed aggression, (the Kiev regime) will use a terror attack committed by the Ukrainian special services in Mariupol. This will take place a few days before the planned invasion and will carried out against one of the industrial production facilities by explosion of a chemical storage.

It is possible that (this will be done) with the use of unmanned aerial vehicles adapted for dumping mines and hand grenades.

As a result, there expected to be a release of toxic substances. According to the information available to us, which is now being checked, the sabotage is planned at the Ilyich Iron and Steel Works Metallurgical Plant of Mariupol.

The large stocks of ammonia are stored there for an industrial production. In the case of a terror attack, the area of possible contamination can be up to 15 square kilometers.

The area of contamination will cover a part of Mariupol with a population of about 50,000 people.

In the future, Poroshenko's regime plans to lay on the Donetsk Republic all responsibility for this terror act.

These actions will be accompanied by hysteria in the Ukrainian media, designed to convince the Ukrainians and the international community that the unleashing aggression against us is 'just and justifiable.'

Obviously, Kiev expects that in these circumstances the issue of gross violation of the Minsk agreements by the OSCE will not be raised and the international community will once again close its eyes to the bloody crimes of Poroshenko regime.

It is no coincidence that the date of completion of the operation of the Ukrainian military is December 15th. Apparently, Poroshenko cannot wait for his schismatic meeting, which he announced to take place on the same day, to report to the schismatics, in fact, to the traitors of Ukrainian people, which he himself is, about his military 'victories.'

Actually, this is the main reason for the provocation conceived by the Kiev authorities, in spite of everything to demonstrate PEREMOGA. Because Naev and Moisuk, seeking to curry favor, don't feel sorry for soldiers to carry out criminal orders of his president.

The DPR calls on the OSCE observers to pay attention to the military preparations of the AFU and stop the aggression.

I appeal to the residents of Mariupol. Brothers and sisters, be vigilant. In case we fail to prevent the SBU diversion, do not panic. Stay calm.

Try in the period from December 11th to 14th not to be near industrial facilities that store chemicals like chlorine, ammonia and others. Take care of your children. They are the least protected in these conditions.

Strangely enough as it will sound, I urge the Ukrainian police to increase vigilance and try to prevent the terrorist acts planned by SBU. Remember, you do not serve the criminals who came to power as a result of a coup. You serve the people of Ukraine.

In conclusion, I will add that the People's Militia of the DPR is ready to meet uninvited guests. We will protect our citizens! The enemy will not pass!"

There you have it. If Basurin's information is right, surely based on Russian intelligence, full-scale US/UK-orchestrated naked aggression launched in April 2014 on Donbass, continuing intermittently since then, is set to resume.

It's vital for Russia to get involved, similar to its intervention against US-supported terrorists in Syria, aiding Donbass freedom fighters smash the scourge of Kiev's aim to replace its democratic governance with fascist tyranny in Donetsk and Lugansk - what no one should tolerate anywhere.