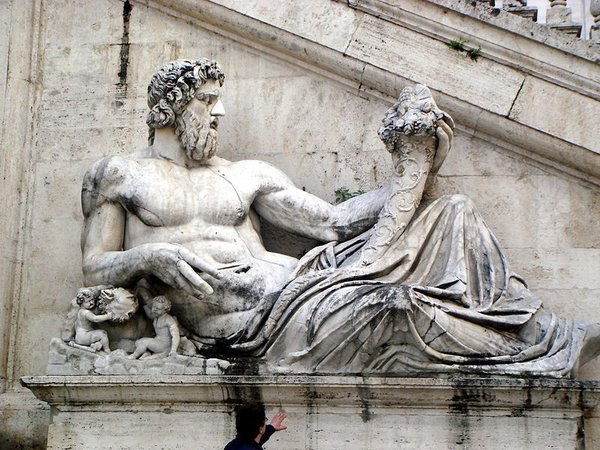 To more than the fateful one hundred days from its establishment, naturally arises the necessity to make an initial assessment of the new Italian government so as to be able to understand what the near future reserves to our Italian homeland. I spoke with Professor Gianfranco La Grassa in one of our friendly conversations and not a few food for thought emerged.

Luigi Di Maio for the 5Stars and Matteo Salvini for the Northern League are the leaders of this government, the most striking in the eyes of Italians. Joining these two is Giuseppe Conte, Professor Conte, with his stately bearing, his command of the English language, his almost Anglo-Saxon aplomb, which so much differentiate him from the squalor and inadequacy of those who preceded him in the office of Prime Minister. Conte is not just a comrade to the Di Maio - Salvini duo, but a real trait d'union that manages to carve out for himself the autonomy and authority that one expects from his role as President of the Council.

Although the two governing parties have undeniable divergences in their political vision, which could also lead to a premature end of the legislature, the League-5Stars executive is committed to keeping faith with the promises made in the electoral campaign by the respective parties that make it up and which were then remarked in the pact of government that led to its birth. You may like it or not, you can agree or disagree with it, but the cut of the former delegates annuities was one of these electoral promises as well as the attention to the great difficulties that Italians experience in finding or keeping a job. The Left defeated in the last elections has not only ignored these difficulties for years and years, but rather accentuated them, following the diktats of Brussels (read: Berlin) under the flag of austerity, cuts to the state budget, the "More Europe!" that would have delivered all of us to a Greek-style nightmare scenario. Not surprisingly, there are many similarities between the former Prime Minister Matteo Renzi and his Greek counterpart Tsipras, both bearers of a shameful subjection to all the most ruinous requests in Brussels (or Berlin, if you prefer).

If Luigi di Maio as Minister of Labor reserves an attention to the difficulties of work of the Italians that touches even a devotion unheard-of, it is with the action of the Minister of the Interior Matteo Salvini that the landings of immigrants have in fact ended and the ships of the (so to speak) benevolent NGOs are no longer shuttling them between the collection points in the southern Mediterranean and the Italian ports, always open and welcoming in the past legislatures dominated by the Italian Democratic Party, which is now well on its way to an extinction as political as deserved. Not surprisingly, the polls clearly indicate that the trust and sympathy of the Italians towards the League and 5Stars have even increased and that, if you vote now, especially the League would increase its votes and its weight in Parliament. The more insulting and absurd criticisms that Salvini receives from the right-minded hypocrites of a Left without more art or part, the more his following increases among the common people who makes, as natural, the largest part of the Italian electoral body.

In a European Union dominated by finance and financial capitalism, Italy had always acted, thanks to the previous Democratic Party governments, the role of the devoted and subservient servant, always on the side of its masters because prey of a self-perpetuating Stockholm syndrome. But now we are witnessing a change of path that, although far from being consolidated, has however in itself the beginning of a future different from what the "real Europeans" wanted to give to us, always ready as first of the class to point the finger to us and to reproach to Italy its true or alleged deficiencies, its problems, its difficulties. Italy has raised its voice and pointed its feet on economy and immigration: there has not yet been a modern Incident of Corfu (unfortunately!) but compared to the servility of the past legislatures, to the blindly and stubbornly willing of disappearing as people raised as the flag of a new Cultural Revolution in Europeanist sauce, there is a change and it shows itself.

Oettinger's words, so despicable and full of contempt for the Italian nation, about the markets that would teach us how to vote properly, we lazy and unfaithful Italian servants who dared to wake up one morning to claim our destinies through our sovereignty, these words have left a mark whose consequences are not yet easily identifiable. Perhaps not only in Italy but also in other countries of the Union, where people are awakening from a narcosis that seemed irrecoverable. The results of the recent regional elections in Germany indicate that German voters are feeling critics towards the policies and the vision of Europe of the current Chancellor, the frau Merkel whose severity and ruthlessness has become so sadly familiar to the Greeks sunk in the economic crisis.

The gap between the Left that has ruled until recently and Italy that, tired of words and teasing, has decided to change the page, was clearly seen in Genoa, just at the funeral of the victims of the collapse of the bridge Morandi. Representatives of the past government were whistled and challenged in a way that frankly none had never seen before, while the ministers of the new government, especially Prime Minister Conte, were greeted with huge warmth and affection. Of course, the people are often wavering and their favors can change quickly but that episode shocked the politicians of the Left, so full of a boast they never perceived as such and that has progressively removed them from their voters and supporters.

Italy's redemption also passes through a new management of the Italian public television. Marcello Foa has finally become the new president of the RAI: a competent person, a good person and with the traits of humility that is proper to those who do things because they know how to do them and do not just cry out in the wind. Controlling now the public television means to reverse the current narrative of "There is no alternative!". It has been used in the past to make Italians accept all the most absurd economic, political and social choices. Foa is an expert in communication, fake news and spin-doctors: he has dedicated two books and countless essays to these matters. The hope, for us the certainty, is that thanks to his management, the Italian public television regain its original authoritativeness and professionalism, thus returning to the service of the Italian nation.

There are many challenges that await us: the path showed is not a straight and stable path and this, which is still a dream of rebirth, can very well collapse under the weight of some internal contradictions. But to prevent us from being reborn as a Nation can not be only the difficulties encountered along the way or the bulimic selfishness of the "markets" (non-existent if not as mere business coteries, reminds us Paul Craig Roberts). If this dream of rebirth, now still in its beginning, should fall, it will be not only because of a struggle without neighborhood made us by other European powers, never really our friends and only forcibly our allies, but also (my opinion) because of a desire for self-castration in which Italians have become, alas, particularly expert.