Syria: False Flag being planned by USA and supporters? 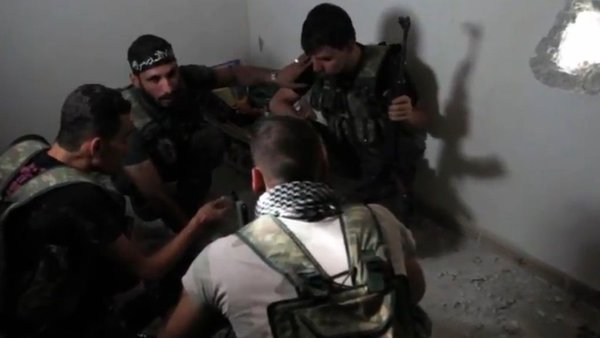 Syria. Peaceful towns and villages where people of different ethnic groups and creeds and races intermingled for tens of thousands of years in peace, sharing figs and olives and bread, celebrating their religions and customs in peace, thrown into chaos as the FUKUS Axis (France-UK-US) once again stuck its ugly nose into other people's business and started supporting splinter terrorist groups with dubious and violent backgrounds to create chaos in the Middle East and impose their model for the area. More lines on maps.

While the FUKUS governments told their people that they were supporting freedom fighters, what in fact they were supporting was rapists, murderers, torturers, thieves, arsonists, child kidnappers. They raped nuns, they raped little girls before and after they were decapitated, they sliced the throats of children after they were forced to watch their parents being hacked to death, or worse, they sliced the breasts off women in the street, they impaled boys on stakes because they were "the wrong religion". They played soccer with the heads of the girls thei had raped after decapitation, giggling as the eyes popped out of the sockets, the teeth splattered around the improvized playing field and bellowing in delight when the head scored a goal. And what were you, the readers of this piece, the citizens of the UK, France and USA, doing all this time? Nothing, supporting your governments which perpetrated these disgusting acts by proxy through the terrorist groups they supported. Now you will sit back in silence as a terrorist chemical attack is perpetrated against Syrian children, blame Assad and still do nothing.

Along comes Russia, Syria's ally, conducting an anti-terrorist operation, and is then accused by the same people perpetrating these horrors as an aggressor when all Russia is doing is supporting the democratically elected and supported government of President Bashar al-Assad and exterminating groups of terrorists.

Now that the operation reaches its final phase, around Idlib where the terrorist forces are concentrated and hemmed in, no doubt along with their foreign supporters, mercenaries and mentors, breaking news: another false flag event is allegedly being planned, serving as a reason for a massive strike by the FUKUS Axis against the Syrian Armed Forces.

The Russian Defense Ministry has announced exactly this, that a chemical weapons attack is being planned to frame Damascus, in the words of Major General Igor Konashenkov, spokesperson for the Russian Defense Ministry. General Konashenkov goes further, outlining the plan in detail: operationals from the al-Nusra Front (now Hay'at Tahrir al-Sham, in other words, al-Qaeda) in Idlib, are preparing the attack, delivering eight canisters of chlorine to a village near Jisr al-Shughur. It is said that the British security company Olive has operationals in the area, which are working with a separate group of terrorists, disguised as volunteers from the White Helmets, who are ready to show a chlorine gas attack on children, who have already allegedly been kidnapped for the ploy.

The FUKUS Axis already launched a bomb and missile attack on Syria in April after another false flag operation in Douma, before a team from the Organization for the Prohibition of Chemical Weapons (OPCW) was able to carry out research into what had happened. Many are those accusing FUKUS allies in the region of ferrying in chemical weapons to the theater of war to create such events, amplified by a willing bought media and swallowed hook, line and sinker by populations brought up on lies and dampened down by reality TV, junk food and soccer.

Let us ask ourselves a question: why are Syrian chemical attacks aimed at non-combatants in areas crawling with Syrian Army personnel which have just won the battle? You do not use weapons against children, you use them against terrorists and you do not use them when you are winning. You use them against chindren who you have kidnapped if you are terrorist filth which has perpetrated the crimes we see above to incriminate the winning forces and garner support from the west, which is pulling your strings. It is not rocket science.

Let us ask ourselves who the White Helmets are, and let us use the words of Syrian Foreign Minister and Deputy Prime Minister Walid Muallem:

Let us now ask ourselves why the White Helmets are accused by multiple sources of kidnapping 44 children in Idlib, as indeed children had been kidnapped days before the Douma incident.

The bottom line is, will the FUKUS Axis admit defeat in Syria, allowing the last bastion of al-Qaeda to fall, as it lies surrounded by the Syrian Arab Army on land and facing the might of the Russian Navy and Air Force? Or will the FUKUS not accept defeat and help al-Qaeda prolong the war by creating a false flag event, blaming the Syrian government and launching massive strikes against military positions?

The final question is how long will Washington, London and Paris go on supporting terrorists to pursue their intromissive and meddling policies overseas?