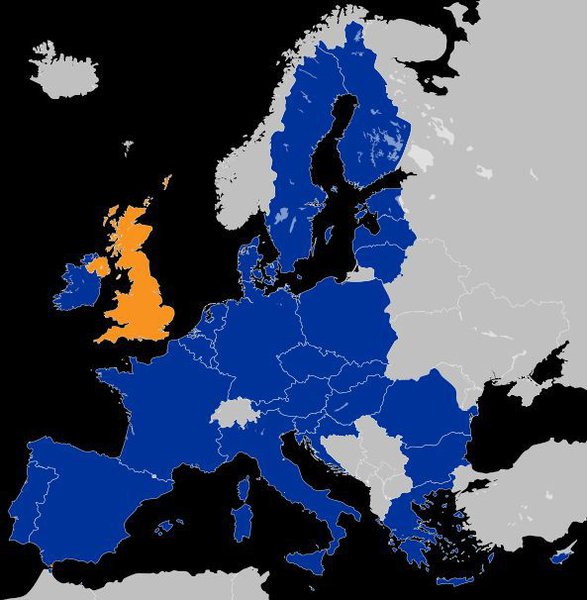 Just occasionally, the United Kingdom experiences something called a Great British Summer, which paradoxically does not necessarily need the presence of the Sun. Communities suddenly flock together as street parties spring up like mushrooms, people bring tupperwares full of pies and sandwiches, jellies, trifles and hot dogs, potato salads, bottles of fruit juice, beer and cider, biscuits, home-made cakes and buns which they spread out on tables erected under an oak tree.

The men take to the Pub, downing pints of bitter, that luke-warm British version of what the rest of us call "beer", sitting outside, legs apart, shouting slogans such as "French food is crap" as portions of greasy fish and chips, sausages and pies adorn the wooden tables outside the Pub, where barmaid Doreen pulls the pints and tells her regular customers: "We don't need no Frenchmen tellin' us what do do, innit?"

And after a campaign based on utter nonsense, and barefaced lies "350 million pounds per week for the National Health Service" they went to vote. And the lie worked, just, but it worked. Of course everyone now knows that the NHS will not be getting 350 million pounds per week, nothing near it, everyone now knows that the UK will have to pay to enjoy the same trading rights it now enjoys but now without a voice, without any say at all and now everyone understands what the hell they did two summers ago.

Many are not too happy. A lot want a second referendum based on the truth and not tabloid-type hairdresser-salon "I think what is going to happen may be that..." type phrases. Most of those trading with Europe are terrified at what will happen as the Continent moves to reshuffle headquarters of businesses away from London and the 27 come closer together, turning their backs on what is now Number 28, the UK.

But there is something more sinister lurking round the corner, waiting to lunge suddenly like a hidden monster and create untold havoc. It is the fact that the United Kingdom did not stop to regard for one second the impact that going it alone will have when faced with the challenge of the new development of urban spaces in the future.

The digital, automated and robotized new world is the new Social Revolution, a modern-day Industrial Revolution with consequences which run at least as deep. The changes this brings to society are deep and massive, the challenge to job creation and retention is dramatic and the trend is to globalize supply and demand, finding collective solutions which can only be provided by an integrative approach and for which local resources at the regional level, even at the single national level, are insufficient.

The mega-cities of tomorrow will need continental resources in an integrated consumer world with its society composed of peoples at a supra-national level. As Madrid and Lisbon come closer together with increased rail links and more air traffic, as Lisbon finds Humberto Delgado airport no longer meets its needs and eyes up the riverside areas around Montijo and Alcochete to release the pressure, so Brussels, Paris, Amsterdam, Luxembourg and the German Cities will be linked by Underground systems as goods and services and people interact physically or at the touch of a button.

Outside the party will be the United Kingdom, standing out in the rain looking in, banging on the window crying "Help!" "Can I come back in please?" while the rest of Europe carries on with ever-closer relations and improved living conditions, unaware of the drama facing the strange figure waving his arms around in a soaking raincoat.

As the Freudian gaffe from President Trump last week forbode, if the UK really thinks it will strike up special deals with the USA or anyone else, it will find out the hard way that they will do business with Europe first and the UK will scrabble around for the crumbs at the expense of jobs and resources for development which it will be shedding by the second.

If the UK goes ahead with Brexit, it will be making a monumental mistake and will sell the future aspirations of the young population of the country, who do not want Brexit, down the drain. Brexit will create a lost generation in a failing country which in ten years will fall fifty years behind the rest of Europe and will in 200 years go back to the under-developed nation it once was, before the Tudors (and especially Queen Mary Tudor, Mary I) laid the foundations for Britain's arrival on the world stage.

Five hundred years of history for nothing, to be sold away on a stupid decision based upon lies.