Of Men and doormats

The second missile attack against Syria, by an increasingly de-civilized West, took place on April 13, about a week after Damascus was falsely accused of a new chemical attack against the Syrian population. Falsely, because Assad's Syria has never used chemical weapons against its own people. Not even against that tiny party that has rebelled against the government and still fights against it with Western aid, of Israel and of the Gulf monarchies. These chemical attacks always occur when government forces are winning an important battle. In this particular case, in completing the liberation of the Damascus Ghouta area. 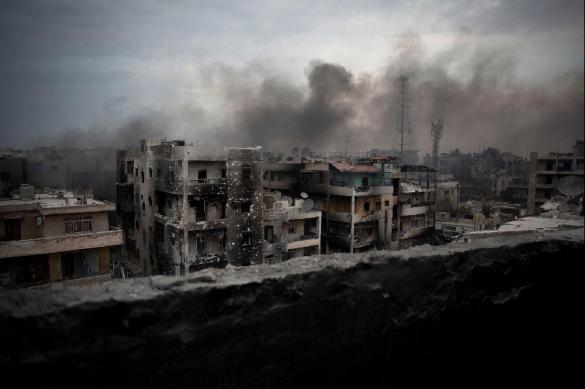 Curiously, the chemical agents used are little or nothing persistent and preferentially hit innocent children and civilians, never militiamen jihadists, nor all those other people who rush to the site immediately after: doctors, nurses, drivers, journalists, all pro-rebels, and the inevitable belonging to that organization called "White Helmets". In the West, the great media present these attacks as truthful and incite a dutiful armed response, in an impetus of vindictive justice of biblical memory. The trivial observation that a pair of simple latex gloves and a rinsed with water certainly can not be enough to safely manipulate people contaminated with nerve agents. The immediacy of the image overcomes the wisdom of certain observations and a false message is thus easily conveyed to the gullible and absent-minded people.

But this time it was different: the new occupant of the White House is likely less inclined to shoot missiles of his predecessor Obama, the Nobel Peace Prize that destroyed Libya. And when he shoots them, only a few go on target, including the "newest and smartest" ones. The week of difference between staging the fake attack and Western reaction has also served to unmask the media operation. Russians did not limit themselves to defending Syria militarily but, this time, also mediatically: Hasan Diab, the child who was supposed to move the world because he was presented as a victim of the chemical attack, was found and shown on television again. It immediately emerged that he was not a victim of the Damascus government but, rather, of the jihadists who kidnapped him on the street and forced with fear to play a lie. Interviewed, he told the true version of the facts. Hasan has shown exceptional courage, worthy of a true Man. Perhaps it is not clear how many risks there are for those who testify to the truth in this way but, personally, I hope nothing happens to this beardless hero. Little Hasan is a Man. The others, those who have staged this horrible farce, those who have been seeking the destruction of Syria for seven eternal years, are only the doormats, useful to the most to clean their feet.

A few days after the attack on April 14, President Assad, the Lion of Damascus, returned to France the Legion of Honor conferred on him by French President Jacques Chirac in 2001. I am sure that Chirac had valid reasons for awarding such a prestigious honor. But the situation is no longer evidently the same. The Elysée has announced that it had already started the procedure for the revocation of the honor but this statement so late after of Syrian decision seems more the clumsy attempt to arrive first running backwards, rather than a real stance.

France has participated since the beginning in the war against Syria but, alternately, the governments of Sarkozy and Hollande have sought a way out that would allow them to maintain diplomatic relations with Damascus. However, Macron made a qualitative leap in negative, authorizing the launch of missiles against Syria and sending troops into Syrian territory to support the US. President Assad's decision then seems to be a very clear message: Syria is tired of the French wavering behavior and its grandeur loser-style. The French troops are now more than ever legitimate targets and will be attacked along with the American ones when the time comes.

Once again, Bashar al-Assad has shown that he has his own love, dignity and decorum. He proved to be the worthy president of a Syria united, secular and yet respectful of all its peoples. Assad the Alawite, Assad the Christian, who sometimes prays in the ancient churches of the precious Ma'lula, where the Aramaic of the times of Jesus Christ is still spoken, Assad the man behaved like a Man while the French president was instead a poor doormat. And how could it be otherwise? It is Assad the Man who married a bright young woman who gave him three beautiful children. Emmanuel Macron instead married a woman who was absurdly older than him, she looks like to his mother or his grandmother. She seduced him when he was just a young teenager. Then a marriage without fruits like a withered root. If the roles were reversed, if it was Macron the absurdly old and Brigitte the absurdly young, many would have shouted to the scandal accusing him of being a male rapist (white, by the way ...) that in the repairing marriage had tried and found just one way to keep controlling his victim. Instead, no chorus of criticism was heard from the usual western progressives and so, a few days ago, phallic symbols without wings made in France flew over the skies of Syria to fire up the prestige of a politician whose electors have become already tired. They flew, but they misfired.

A few hours ago, the presidents of the two Koreas met for the first time since the armistice that suspended hostilities on the Korean peninsula was signed. Seeing Kim Jong-un and Moon Jae shaking hands in a blaze of pacifism was something unexpected. It has not been a long time since it seemed that the neocon America, but also that MAGA of Donald Trump, had to attack North Korea and wipe it off the face of the Earth. But nothing. Power of atomic bombs and missiles to bring them to the target. All American air defense systems can not guarantee that even a single North Korean atomic bomb does not hit a US city. The North Koreans have seen the American bluff and, for the moment, they have won. Kim Jong-un was never either crazy or stupid, as the Western presstitutes described it. Even the old Jimmy Carter had noticed, unheard: sent to Pyongyang for a parallel diplomacy, no one paid him any attention when back at home. The president of North Korea has instead proved himself as a smart politician who has been able to involve different actors in the play of the two Koreas, even against their will. A missile can be fired in various ways: if you want to inform the world of its range, just shoot it up, do not let it fly well above Japan. The Japanese become not a little nervous and protested. They demanded more weapons, more army and, of course, more freedom to maneuver from the ties that the defeat in World War II imposed on them. Americans have turned their noses, accustomed as they are to believing that Japan is a doormat State. In the end, they had to give up on something and, for the moment, Uncle Sam has calmed down. In the future we will see. But for the moment, it is Kim Jong-un who has behaved like a Man. I am sure that if Saddam Hussein and Mu'ammar Gaddafi were still alive, in their place as leader, they would dutifully take note.

Alfie Evans is dead. The brave little gladiator who refused to die after an English court had ordered / authorized the detachment of the respirator to which he was connected, this little hero surrendered to the only true democracy of human life. We extend our most sincere condolences to the Evans family and thank them for the lesson of humanity that they has given us. We are not pleased to know that Mr. Anthony Hayden, of profession  judge of Her Britannic Majesty, member of an LGBT lobby and pro euthanasia, will one day live, he and all his friends, the same democracy of little Alfie. A little more, instead, we are pleased with the idea that, perhaps, he and all his friends will also face a non-corruptible, homosexual or gendered-sick Judge. Italy had offered to help Alfie Evans. By joint decision of the Minister of the Interior Marco Minniti and of the Foreign Minister Angelino Alfano, Alfie Evans received the Italian citizenship, with urgent procedure. An Italian military plane was ready to take off to take him to Italy, with doctors on board to assist him during the journey. London opposed. For what reason? It was no longer an English economic problem but Italian and Italy had already decided. Someone feared that little Alfie would be saved? Or the inefficiency of the British health system? Or that the English health protocols are not the expression of superior rationality for which they are presented? The gloomy and dark haughtiness of the perfidious Albion prevailed, as was inevitable. It has always been a solid basis for the British eugenics tradition, from Maltus to Huxley, filled with social Darwinism and contempt for the lower classes and foreign peoples. The nobles of the United Kingdom could hardly tolerate that their ideological supremacy was questioned by a country like Italy, full of problems and without a new government two months after the elections. However, whether or not like the Peers of the Kingdom, it was the Evans family, Minniti and Alfano that behaved like Men and the Lords like doormats. Alfie was an Italian citizen too. Perhaps our judiciary, so diligent in some cases, will have something to say about this matter.