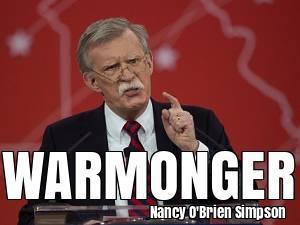 Even now, many Amercians want to give Donald Trump a chance.  He won them over by calling out the mainstream media (MSM) as a propaganda mouthpiece for the all-powerful corporate Deep State.  The MSM, in turn, despises him which has to say something good about Trump.  He nailed the politically weaponized CIA/FBI for their nefarious lies and leaks about Russia.  He recently congratulated Putin when the intelligence w̶o̶l̶v̶e̶s̶ agencies advised him strongly not to.  He said he would champion the middle class and the little guy when Hillary was strutting with the A-listers and celebs.  However, it's getting more difficult, Mr. President, it is getting more difficult.

"I will never send our finest into battle unless necessary, and I mean absolutely necessary, and will only do so if we have a plan for victory with a capital V," he (Trump) thundered. "The world must know that we do not go abroad in search of enemies. "The speech was part of Trump's attempt to make a decisive break with the more hawkish and interventionist wings of his own party, which he blamed for the Iraq War and Washington's icy relationship with Moscow. He wasn't just trying to argue that he'd be a different kind of president than Democrats like Barack Obama or Hillary Clinton. He was also arguing that he'd be a different kind of president than Republicans like George W. Bush." Vox, August 2017

Trump historically has been an isolationist.  He has railed against the war in Afghanistan for years.  "Prior to the presidential campaign, Trump more than a dozen times wrote on Twitter that the U.S. military should leave the country given the lives and dollars lost in Afghanistan."

"Let's get out of Afghanistan," he wrote in January 2013. "Our troops are being killed by the Afghanis we train and we waste billions there. Nonsense! Rebuild the USA."  The Hill January 1, 2018

So, who did President Trump announce was his new National Security Advisor?  A raging, neo-con warmonger of the highest order, John Bolton.  Bolton was a senior fellow at the American Enterprise Institute.  A neo-conservative think tank, a bastion of war mongering and regime change.  Speaking of which, Bolton is on record for advocating regime change in both North Korea and Iran.

What is regime change?  Regime change is when a country decides that they do not like the sovereign leader of a foreign nation. In the case of the USA, it is when a leader is not doing what we want him to do and we think we have the almighty right to depose him, or get rid of him.  Or, as Hillary Clinton puts it in regard to regime change with Libya's Muammar Qaddafi, "We came.  We saw.  He died."

This arrogance can be seen when in 2002 John Bolton flew to Europe and demanded the resignation of  José Bustani.   Who was José  Bustani? He headed the Organization for the Prohibition of Chemical Weapons.  Bolton masterminded his removal at a special session of his own organization.  No less than the United Nations itself condemned the action.

"The United Nations' highest administrative tribunal later condemned the action as an "unacceptable violation" of principles protecting international civil servants. Bustani had been unanimously re-elected for a four-year term-with strong U.S. support - in May 2000, and in 2001 was praised for his leadership by Colin Powell." USA Today June 4, 2005

We get bent out of shape when we think someone from Russia put some ads on FB that called out Hillary for her unethical behaviors, but we think it is A-okay to march into a sovereign nation and assassinate, or encourage rebels, to kill their leader.  Or to depose leaders of their own orgnizations.  Hubris of the highest order.

Bolton has been called a "war hawk".  His mission and message is clear.  Bombs work, carnage is great, and the USA wins.  At all costs, the USA wins.  Diplomacy....  not so much.  This is evident in Bolton's repeated calls for bombing North Korea, Iran, and continuing the war in Afghanistan.

"Bolton has explicitly called for a preemptive strike on North Korea, advocates bombing to force regime change in Iran, and wants an open-ended military presence in Afghanistan. He has also called for a much more confrontational stance against China, including stationing U.S. troops in Taiwan."

If this is the face of things to come, Donald Trump has turned his back on his best instincts.  He knows in his gut that too many people have died on foreign soil because of our never ending neo-con wars.  He was elected in part because America was sick of the Bush/Clinton/Obama wars.

The last thing this planet needs is more bluster and bombs and deaths from the USA.  War is easy to fight from an office.  President Trump needs to visit a bombed city and see the dead children, hold a baby orphan, comfort a civilian man with no legs, let a young widow tell him her story.  Our bombs, our ensuing carnage have done enough damage to last an eternity.  You have the power to stop this insanity, President Trump.  You promised you would.