Some A**hole should shut his cakehole

Some A**hole should shut his cakehole 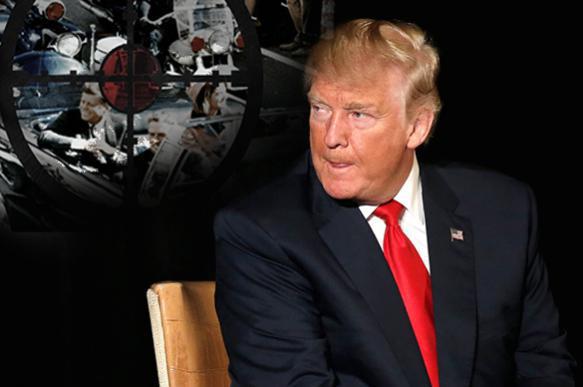 So Donald Trump referred to "shithole" countries in a meeting on immigration. Or did he? In denying the allegations, claiming that was "not the language used", while others state that was the language used, either he, or they, are lying. The bottom line is, what to make out of the "shithole incident"?

There is one in every crowd, one in every family and one in every cranny of the village pub. He sits the depths of the building, legs spread wide open, bawling obscenities about the French, saying the baguette is shaped thusly so it can be shoved up an anatomy, about how Spanish women have thicker moustaches than their menfolk, how dreadful French food is, full of sauces to hide the bad quality of the meat and asking why the fish and chips in the the holiday resort is different from what it is back home.

He is prone to laughing raucously at family gatherings, getting drunk and insulting his guests, slurping his soup straight from the bowl, using the tablecloth as a napkin and punctuating his discourse with short, sharp belches and when asked what the new secretary is like at work, he will lift his left leg and break wind loudly then curl up giggling. He is the type of person to boast about "grabbing pussy" and then claiming the remark was "locker room banter". Derided by the ladies of the family, who whisper that he is not the sort of person one would invite to Aunty Maud's tea party, he is however popular among the gentry, a respected member of the local church, a back-slapping buddy down the pub, a good father, a loving husband and a hard, honest worker. But I repeat, not the type of person one would invite to Aunty Maud's tea party.

And now to Trump and his "shithole" comments. Two options and those who were not in the room at the time have no way of knowing whether he used that word or other "rough language" as he admitted. Either he did not use the word, in which case it is strange that others would invent it and attribute it to him, or else he did, and by saying he did not, would be lying, which makes it worse.

Putting things into perspective, what Donald Trump says or does in his private space behind closed doors is his affair and nobody else's. However, if Donald Trump did make the remarks, or anything similar, in an open meeting in a place of work, it shows utter incompetence for the place he occupies. Imagine Queen Elizabeth II stating "As Head of the Commonwealth, one has to put up with all those shithole countries. It seriously pisses one orf". She would not even think of such a thing because making a comparison, Queen Elizabeth II is competent for the job and there is no comparison with Trump.

But, and here it comes, let us also talk common sense, two words I am very comfortable with. Let us also not deride President Trump too much and go for the overkill over what is, to date, an allegation and let us not brand him a "racist" for referring to countries (if he did) as "shitholes". And what I am about to say is based on this clause, if he did.

I am sure that on an individual level, Donald Trump has plenty of black friends, yellow friends, brown friends and pink friends and in using the term "shithole" he is not insulting persons or peoples personally, he is merely mouthing off like the fellow in the analogy above.

The difference is that the fellow in the analogy is the stereotype one finds in every workplace or public house and as seen in the comparison above, it is not the type of behavior one would expect from the President of the United States of America, or from anyone else in a public position. It denotes what can only be considered as pig-headed arrogance, contempt for the seriousness of the position and an insolence towards the people he has been elected to represent on the world stage. And I apologize, to pigs.

In placing himself at the level of the village idiot, bawling obscenities at soccer matches and urinating on the wall of the police station after it has closed, Donald Trump has done absolutely nothing to raise the standing of the United States of America in the international community. He dare not step off an aircraft in London, the chief Chihuahua yapping sycophant of its abortion,  knowing that the reception George W. Bush received would pale into insignificance compared with the one he would get, knowing that the Englishman can be a gentleman but is also capable of the worst and most blatant display of barbarity, in this case possibly deserved.

To date, he has not yet been rude about Russia but those in his administration have, like Tillerson or that female at the United Nations and to date his attack against Syria, launching missiles at troops who were fighting against ISIS, was an act of war, an act of stupidity, a criminal act of murder and terrorism and probably provoked by a family member telling him Hey! Why don't ya'll get your thumb out your as* and do something? To date, mediocre, mediocrity, nothing special. Not the type of thing to boast about at Aunty Maud's tea party.

But let us also question what a "shithole" country is. It is one, in the opinion of those who Trump's comments represent, not only in the USA, where the people are dark, "darkies", where the climate is hot and where things do not work as well as they do in the Northern Hemisphere, judging by Northern Hemisphere standards. And why not?

Because these "shithole" countries were invaded by Western powers, their societies and social fabric destroyed by officials in offices drawing lines on maps, removing from power the group which would exercise it naturally and replacing this with a group which would only exercise power unnaturally, keeping it in place because the invader knew that without its foreign backer, it would collapse. Their resources were pillaged and placed in the hands of the invaders, the channels of trade were inverted outwards, their menfolk and womenfolk were chained in the holds of ships, transported to the New World in a sea of excrement, chained together with corpses.

Yeah, these are "shithole" countries.

"My nuclear button is bigger than yours". "I am the President of the United States of America". No really.