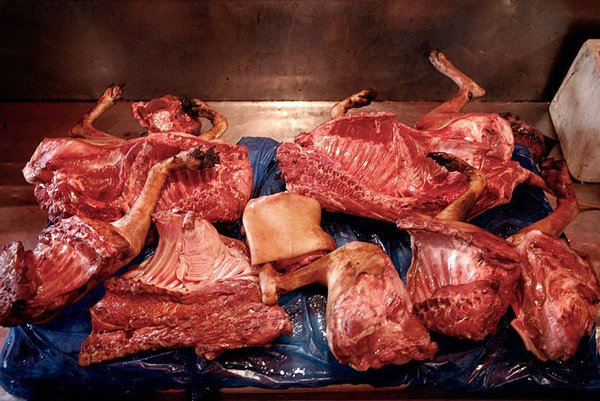 Before you read any further, readership discretion is advised because what I am about to write is distressing for those who love animals, particularly those who love dogs and in general, any civilized human being.

Speaking of Poodles, there probably are few in this...country. Look at the main photograph illustrating this piece and you will see the remains of dogs which have been hacked to pieces. Read on to see how they were murdered. Most of us derive great pleasure out of cohabiting with a dog and sharing the wonderful experiences which write that chapter of our lives, which is indelible in our personal history and a shared memory that stays with us forever.

We remember the good times, the walks, the smiles, the games, the playfulness as the dog forms a pack with us and shows extreme loyalty throughout its life which is unfortunately far shorter than ours. But that is the way it is.

We do not hold them in cages in cramped, disgusting conditions, quivering in fear, shivering with cold, screaming in pain and yelping in panic before they are grabbed and hacked to pieces or else carted off to a slaughterhouse to be treated as pieces of meat, which they then become. Or worse. Yes, worse.

"How tender this dog is, I am sure it was beaten soundly before it was butchered. That is why its meat is delicious!"

Some of them are strung up and grilled alive. In some street corners, terrified dogs, already so beaten and emotionally drained that they have given up resisting and just take the living torture their lives have become, resigned to the fact that their death can only be better than their life. Some are thrown alive into boiling water to get rid of their fur. Others are blow-torched, alive. Screaming in agony and panic-stricken. A video recently circulated on the Internet of a Korean female blow-torching a terrified dog to remove its fur and giggling as she did so. The dog had given up and had stopped resisting. Its eyes were sad, sunken and hollow. It was pleading to die, as our dogs plead to go for a walk.

These are in many cases pets which have been stolen from people's homes or else strays taken to dogmeat farms where they are bred and reared for the meat eating fest, Bok Nal, at which over two million dogs are slaughtered and eaten. This is not therefore a small-scale local cultural custom or tradition. Two million speaks for itself.

Bowing to tremendous international pressure, the South Koreans made a show about closing down the largest dogmeat market, Moran Market in Seongnam, hoping to bolster international interest in the Winter Olympics in Pyeong Chang, February 9 to 25). Similar measures were taken before the Seoul Olympics in 1988 and the FIFA World Cup in 2002. Then guess what happened? Correct! In fact what has stopped at Moran is not the selling of dogmeat, but the slaughter of the animals and the display of live dogs for sale.

"Look at it jerking as I burn its hair off its back. Ha!Ha!Ha!Ha!Ha! Stay still!!

Most people, and it has to be said, a growing number of South Koreans, who represent the majority of the younger generation, treat their dogs with the love and respect they deserve. This is true. But in South Korea today, as it gets ready for the Winter Olympics, preparations are under way for this year's Bok Nal festival, the three hottest days of Summer, when South Koreans consume dogmeat to make them feet cooler and to reinvigorate their blood. Retrievers, Labradors, Cocker Spaniels and other breeds of dogs will be electrocuted, boiled alive, beaten to death, strung up with their throats slit or burnt, grilled and roasted alive. Remember, it is not only on Bok Nal days that dogs are slaughtered and consumed. Hundreds of thousands of dogs are today suffering, waiting for their fate, to be turned into Gaesoju (medicinal drink), or else Bosintang or Gaegogi Jeongol (dog stews), Gae Suyuk (boiled dog), Gaegogi Muchim (steamed dog).

I believe that anyone participating in this year's Olympic Games in any way, shape or form is in some passive or active manner collaborating with this disgusting, barbaric, cruel and wholly unacceptable tradition which has no place on Planet Earth 2018.

As sports correspondent, among other positions, I shall not write one word this year about the Winter Olympics, not because Russia was banned but in solidarity with animal rights. I sincerely hope my readers take a stand with me and I hope lawyers find a way to ban South Korea from all international sporting, cultural and trading organisms until the consumption, rearing and preparation of dog meat is eradicated and banned by law. Until then, this country has no right to take part in the international community and those dealing with it are connivant.

What a revolting, sickening and shameful example to represent the Olympic Spirit in 2018.

By The original uploader was Qwyrxian at English Wikipedia - Transferred from en.wikipedia to Commons by Tomchen1989 using CommonsHelper., CC BY-SA 3.0, https://commons.wikimedia.org/w/index.php?curid=12122457