Most civilized people around the world love animals and care for them; most have a special place in their hearts for "our best friend", the dog; most derive great pleasure out of looking after one of these womderful animals and giving them a happy and comfortable life. They don't farm them and eat them. 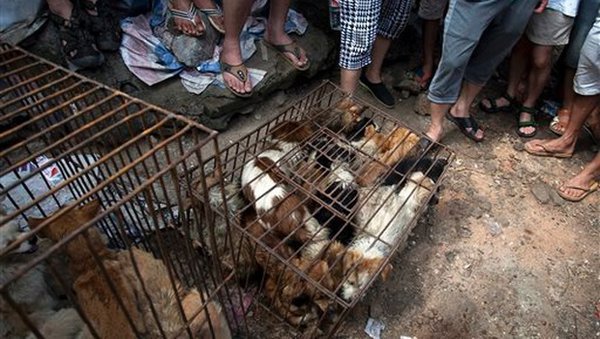 Warning: For those who may be disturbed by the graphic description of what South Koreans do to dogs, reader caution is advised.

Let 2017 be the last Bok Nal, the dogmeat-eating feast, taking place on the three hottest days of the year between July and August as per the lunar calendar. Around two million dogs are slaughtered after being held in barbaric conditions more befitting a medieval torture chamber, to be consumed by South Koreans whose idiotic belief that eating dog meat can revitaize and cleanse the body means that this outrage is carried out year after year, while the rest of the world sits and watches.

It is widely believed in South Korea that people have a right to eat dogmeat at this time of year, and so there is a huge seasonal dogmeat industry focused on the Summer months. After being slaughtered, and in some cases, skinned alive and thrown into a pot of boiling water, screaming in agony, the dogs are chopped into pieces and served as a spicy soup called boshintang or as a tonic called gaesoju. And no they are not necessarily specially bred for the purpose - many are pets which are stolen, their collars being proof of this.

It is not only Bok Nal

But it is not only at Bok Nal times that South Koreans slaughter dogs. There are dog farms in this country which provide meat not only for this festival, but to be consumed inside South Korea or exported to China during the rest of the year. On these farms, the dogs are kept in disgusting conditions, smeared in excrement, in cages so small they are unable to stand, let alone exercise and are then butchered or transported for slaughter in the most deplorable manner, packed into tiny boxes on trains. Terrified, these sociable animals know their fate as they wait, powerless, to die.

In many cases, the terrified animals are strung up on meat hooks, thrust into their necks or backs and while still quivering and yelping in abject panic, are literally hacked to pieces, or else skinned alive and boiled, alive.

And it is not only South Korea which engages in this sub-human activity. Let's travel across the Yellow Sea to China, where the Yulin dog-eatinbg festival takes place every year.

Yulin, Guangxi, PR China. A dog is beaten, slit open and thrown to the floor, alive, with its intestines hanging out. Its eyes look out in a mixture of bewilderment, terror, pain and questioning. Only yesterday it was sitting on the sofa of its loving human companion, being stroked.

At Yulin, pet dogs are stolen from their owners. Apart from being strung up and hung on meat hooks, some are burned alive, others are boiled alive, others are beaten to death with hammers. Others are sliced to pieces with chainsaws, screaming in agony, trembling in terror, literally being cut to pieces while their terrified faces are held in vices.

But it is not only dogs that suffer this epitome of cruelty at Yulin. Cats, also. There is photographic evidence of puppies thrown into a pot of boiling water. Another of a kitten being held with a firm grip of the hand while its fur is removed with a blow torch. In another, a woman looks on, smiling, as a dog writhes around in pain, wriggling its four legs helplessly, looking at the camera in utter and total defeat as its intestines hang out of a gaping slash in its side. In another, a dog is whimpering as it tries to crawl away after being boiled and skinned. Its eyes have been burnt, its snout is covered in blisters but it is still alive.

In another, a dog is hauled out of a crate stuffed full of the animals, crammed in so tight that they can hardly breathe, and is grilled alive, feet first, while the scruff of its neck is held by the cook, as the customer looks on. The dog is screaming and trying desperately to escape.