The law is perfectly clear and very explicitly and expressly laid out in the document called the United Nations Charter, which establishes clear rules as to the rights and duties of nations governing cases of international conflict. Therefore under these rules, nations should be held accountable for their actions. So why aren't they? 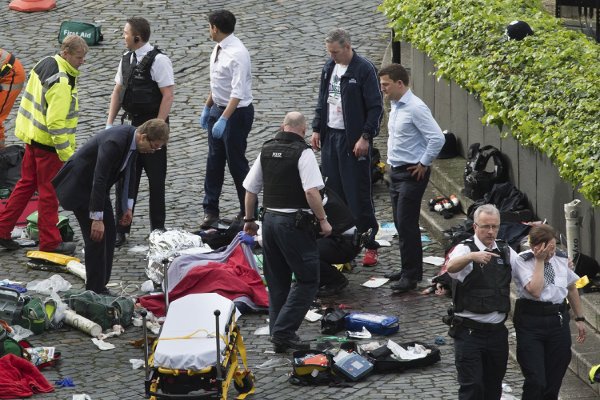 However absurd the notion that I can gang up with my more powerful neighbors and attack a property and its inhabitants because I covet their fertile land, using wanton force to force them off it, killing some in the process, including innocent women and children, rendering their water supply undrinkable "to break their backs" and destroying their energy producing systems so they could not fight back, this is exactly what happened when the West turned on Saddam Hussein in Iraq and Muammar al-Gaddhafi in Libya. And it is what is happening today in Syria.

2017. We do not have a civilized, enforceable international legal system

They used military equipment against civilian structures, occasioning the murder of civilians and military units alike, occasioning the grevious and actual bodily harm of civilians who had nothing to do with the conflict, they used military equipment to attack life-bearing services such as water supply and the electricity grid. In the case of Iraq they strafed fields of cereals with military jets to burn food, they left the theater of conflict contaminated after the conflict had ended. In scenarios where the war was legitimate and backed by the UN Security Council (not the case in Iraq) and where the UNSC Resolutions had been followed (not the case with UNSC 1970 and 1973 (2011) in Libya), these are war crimes. In cases where the war is illegal and the Resolutions have been breached, these are humanitarian outrages which the human history book cannot and must not overlook.

Iraq was a stable country where most of the population lived in peace, had jobs, went about their daily business and placed bread on the table at the end of the day. The same is true for Libya only more so, because it was the African country with the highest Human Development Index prior to NATO's murderous escapade. In both countries advanced social welfare systems provided for the needs of the population in general.

Enter frontstage the West and the finger of Satan

Enter frontstage (right) the West, championed in Iraq by the United States of America and the Anglo-Saxon Syndicate (ASS, the UK and its former penal colony Australia) and championed in Libya by France, the UK and US (FUKUS Axis). Immediate result: thousands of people murdered in callous and criminally negligent attacks, destabilizing the State to the point where it collapsed. As usual they interfered with the social structure of the countries touched by this hand of Satan, ignoring the Sunni in Iraq and thus giving rise to Islamic State and in Libya, destroying the Jamahiriya system which was a finely tuned network to guarantee peace and stability in a tribal society, giving rise to total chaos and the entry of IS in the gateway to Europe, giving rise to a horrific refugee crisis in which thousands more people have died.

In Iraq, eleven million people are in need of humanitarian assistance. Three point four million are internally displaced, 700,000 of these in Mosul alone. Numerous ethnic groups which lived in harmony under Saddam Hussein have been murdered, forced into slavery, or relagated to the status of sexual slaves (the Yazidi for example). In Libya, now nearly twenty per cent of the population needs urgent humanitarian assistance, while two hundred and forty thousand are internally displaced. These are the statistics of the USA and UK, not Saddam Hussein and Muammar al-Gaddhafi.

And now Syria. Instead of helping the legitimate Syrian Government to form a process of peace and reconciliation, what did the West do? It took sides, interfered in an internal conflict, armed, aided, abetted and trained violent terrorist groups and instigated them to take up arms against the State, murdering police officers, murdering emergency services personnel, murdering and raping nuns, murdering and sexually assaulting children, raping little girls before and after they were beheaded and after they were forced to watch their parents being executed. And for those who draw the time line at 2011 when the crisis began and claim they are supporting poor downtrodden civilians against a dictator, let us remember that most Syrians want al-Assad to remain as their President. Over 70 per cent of them.

So for those who wish to praise the West for siding with terrorists let us draw the time line in 1956, when a CIA plot aimed to topple the Syrian government. In 1983, a CIA document mentioned a plan to destroy Syria to enable a pipeline to be built and managed by pro-Western forces. In 1986 a CIA plan was drawn up to launch a sectarian war between Sunni and Shia in Syria, using the Muslim Brotherhood to further this aim (a terrorist group outlawed in Syria). In 2005, al-Assad was warned that the West was plotting regime change. In 2006 this was confirmed in a State Department cable which discussed several strategies to achieve this aim. Between 2005 nd 2007 the United States of America actively supported anti-Assad opposition groups. In 2009 the USA and its chief poodle the UK funded a satellite channel to broadcast anti-Assad propaganda. In 2009 a Saudi plan to remove al-Assad and make Syria a Sunni country was mentioned by the State department at the same time that this same department revealed that its ally Saudi Arabia was the number one source of funding terrorism worldwide. Yet the West continued and continue to do business with Saudi Arabia, engaging in handshakes, smiles, back-patting and sumptuous meals (while complaining in private that the Saudis are a load of pot-bellied, lazy, arrogant, good-for-nothings). In 2011 special operations forces from the USA, UK and Turkey were operating in Syria before supplying terrorists with weapons and training them.

If this is not Satanic I do not know what is. It is the responsibility of the people of the USA, its lapdog the UK, in turn its colonial bedboy Australia and today France, to end these murderous policies through the legitimate political processes in place, through deselection of candidates, through monitoring of votes, through bringing international policy onto the national election stage, through questioning the constitutional legitimacy of NATO.

Surely, a pan-national institution cannot dictate the foreign policies of member states? Then why does it, and why does it make budgetary demands (2 per cent of GDP) in the process?