It hasn't simply gone viral, it's an actual virus. "Hating Uncle Putin" is a contagious and infectious disease that's spreading like wildfire throughout America. Americans don't view the "Let's Hate Vladimir Putin" virus as a sign of illness but rather as a patriotic event with a flag waving festering malice within the minds of the American public. 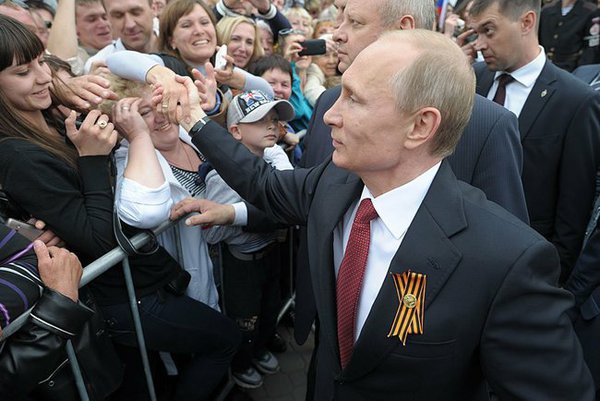 But Americans don't view the "Let's Hate Vladimir Putin" virus as a sign of illness or as a systemic infection replete with symptoms such as odious hate speech, spurious anti-Russian and anti- Christian rhetoric and counterfactual criticisms, but rather as a patriotic event with a flag waving festering malice within the minds of the American public.

But could it be that good old Uncle Sam is jealous of the gracious Uncle Putin and in particular his world changing accomplishments? Is it Uncle Sam that wants desperately to be our "favorite Uncle"? So what is the ignominious US press and media saying about this? Holy Moley!

"PUTIN PREPARES TO FIGHT AGAINST THE RUSSIAN PEOPLE" (Newsweek)

"To paraphrase Pravda in 1929, Putin is the Stalin of today.

Nobody since Stalin's death has achieved such longevity or uncontested power over Russia as Putin has.

Nevertheless, tomorrow he may be remembered as the Brezhnev of today, for he has presided over a galloping stagnation of the economy and public morality.

At the same time, like many former Russian leaders-including Brezhnev, Stalin, and Nicholas I-he seeks to imprison Russia in a straightjacket of repression and mandated official thinking that glorifies autocracy and Russian state nationalism."

The garbage they print

Why does Newsweek publish such gratuitous garbage and try to shift the blame not only to President Putin but to Pravda as well? Is Newsweek so journalistically pristine, morally correct, and virtuous that not only truth but good manners are beneath them?

Perhaps the entire US press' self-professed prestigious pundits can explain not only why Uncle Putin is re-elected so often, but also why President Trump requested a "summit meeting" at this week's G-20 conference.

More so, why do so many world leaders look forward in earnest to meeting Uncle Putin, face to face, and in the Kremlin? The US press and media are dumbfounded and so they simply ignore all too many glaring facts. To Newsweek, "Freedom of the Press" means giving it the right to make up stories as it goes along.

Even Newsweek's metaphors are disingenuous drivel. The only "straightjacket" needed is with Newsweek's editorial staff that once again fails to check facts, makes unwarranted conclusions based on fallacious predicates, and just downright lies, making up falsities as they write.

To Newsweek, fake stories and hyperbole may be journalism deserving publication because all the editors need to do, whether it is fact or fiction, is call it "Opinion". Yet, to any truthful and honorable writer this Newsweek pseudophilia is a typical kind of mind poisoning found all too often in US junk journalism. It is no less than a crime and is now inundating the Fourth Estate.

And Newsweek is but a small part of the western media's attempts at Putin evisceration.

In the book "Putin's Kleptocracy: Who Owns Russia?" we see the official caricature of Vladimir Putin, not as "Uncle Putin", but as some kind of a hybrid between the historic Dracula, Vlad the Impaler, and Chicago gangster Al Capone.

Ironically, Pravda is being quoted in the Western press almost as much as it was during the Cold War Era, but all too often unfairly and with every calumnious canard available to a procured US press in order to discredit their rivals.

So why do I, a 100% American, born in Chicago, Illinois and raised in the good old USA, call Vladimir Putin, "Uncle Putin" when the US and many in the western world mistakenly believe that Uncle Sam is their only Uncle?

My favorite uncle growing up bears a strong physical resemblance to Vladimir Putin. My Uncle Gus was born in Northern Epirus, Greece, an ancient Greek region that traces its roots as far back as the tribe of Achilles. Epirus was a cultural and military stronghold for the Greco-Roman world and Byzantium as well.

Uncle Gus and Uncle Putin both have those azure blue eyes with a dash of oriental facial features, but what is more uncanny was Uncle Gus' and Uncle Putin's similar views on life.

Uncle Gus like Uncle Putin loved nature and the outdoors. I remember on Saturdays he took his children and nieces and nephews outside the city and into the woods. There he would have us do tumbling down the hills and run after him as he zigged and zagged between bushes and trees that made it impossible to catch him. He was fast on his feet like his ancestor "Swift-Footed Achilles" and was quite a sight as he put his hand atop his head holding his hat down so it wouldn't blow off from the sheer speed of his gait.

Often Uncle Gus would point out to us the edible plants in the forest and which ones could be used for medicine and for which malady they were best used for, even how to prepare them and also which plants could be consumed freely for survival.

We all see the same kind of love Uncle Putin has for the Great Outdoors. He thus inspires young and old to enjoy the health giving powers of the forests and streams and all of Nature's Great Outdoors. Uncle Putin pushes Russian citizens to have this natural and wholesome view of life.

Is that a good reason to hate Uncle Putin?

Uncle Gus was a lover of Christ. He was not an avid church goer because he worked hard to support his family, often late into the night, much like Uncle Putin does to support the future of his country.

Uncle Gus often emphasized the importance of humility in light of the Power and Vastness of our Universe pointing out to us the stars and Constellations and the grand scale of Intelligent Design. He often said, human beings need something higher to retain their virtues. The historical traditions, in Christ and the Christian Church in his view were awe-inspiring.

And this too is precisely what Uncle Putin has done. In Russia there is not only a restoration but a Renaissance of Orthodox Christianity both in the historical traditions and in the metaphysical mysteries imbued in the Eastern Orthodox Church.

Is this Love of Christ and Renaissance of Russian Orthodoxy a good reason to hate Uncle Putin?

At the same time Uncle Putin fosters communication, dialogue, and friendship among all faiths, heralding the Freedom of Religion as a cornerstone to mutual respect and camaraderie.  This is also what stifles the radical religious groups and opportunist nations that are the sponsors of terrorists.

Is that a good reason to hate Uncle Putin?

And who has the world recorded as leading the fight against terrorism throughout the civilized and even the uncivilized world? Though Newsweek may deny it, it is none other than Uncle Putin.

Is his fight against bullies and terrorists a good reason to hate Uncle Putin?

And who has the documented record of promoting education and the arts throughout Russia and the world?

Is that the reason for hating Uncle Putin?

There is the cultural difference between Uncle Putin and Uncle Sam that has become a chasm in worldview. But America should take notice; did any US President go to Moscow and sing Kalinka?

But wait, what world leader went to Washington D.C. and sang "I found my thrill on Blueberry Hill"?

I'll give you all a clue. Bush and Obama didn't even know the words let alone sing in harmony with the music.

But Uncle Putin like my Uncle Gus knew how to sing and to do it in harmony with all of their surroundings.

Is that lifting of the Spirit in song the reason for Hating Uncle Putin?

The US policy of hatred has gone beyond Machiavellianism into the Satanic policy of Clintonism where there is neither right or wrong.

But Uncle Gus and Uncle Putin have taught quite the opposite. There is an inherent as well as a Universal difference between right and wrong that they base on life long experience and insight.

Is that the reason for Hating Uncle Putin?

Remember that no one is perfect, not an Uncle and especially not America in the Twenty-first Century. Go ahead America, Hate Russia and Uncle Putin if you will, but ask yourself first is it yourselves that you really hate?

Let's pray and work so that honor, truth, and justice are restored to our "good old Uncle Sam", and yes, that we have the insight to propagate virtue rather than allowing the US, "Uncle Sam" to remain "Uncle Stupid".