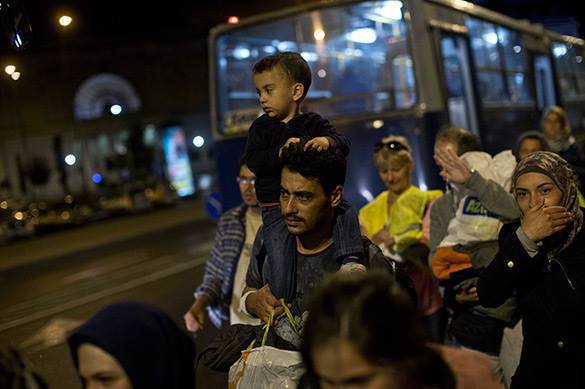 Once again, the UNO is warning of increased humanitarian bloodbaths, famine and forcible displacement of people across the Arabian Peninsula. This unfolds magnanimity of irretrievable historic ironies of the authoritarian leadership prevalent all over the Arabian Peninsula. People live in denials of basic intellectual freedom, human rights and dignity except massive police surveillance, and loss of moral and political ingenuity. When a culture falters its basic human values, the masses become fearful of the unknown. All authoritarian leaders have installed massive secretive police apparatus to keep the herd under control by means of intimidation, violence, indefinite imprisonment and killings. The insane institution is widely known throughout the Middle East political culture. This week the Amnesty International reports of approximately 13,000 civilian hanged by the Bashar-al Assad regime at Sidayna military complex near Damascus. But who will hold him accountable for the crimes against humanity? This is a pattern of inhuman governance embodied in most of the Middle Eastern societies.

The Syrian hangman is not alone in this cruel business. Several million of civilians killed and displaced from the Syrian conflict, one wonders why the Arab leaders took no initiatives towards workable political solution and peacemaking? Are they morally and intellectually lifeless? Egypt is another bloody scar for undoing the democratic system of governance. Those planning to hold the 2017 Dubai gathering of "good global governance" appear indifferent to such stern warning that most oil exporting Arab societies are in a political abyss to dismantle the socio-economic and intellectual infrastructures by foreign-led wars. Wealth cannot buy wisdom. While Obama and the former UN Secretary General Ban K. Moon listed as speakers and will earn millions for speaking engagement at the Dubai convention, it will have no impact on the political misfortunes and strides of the Arab masses. The so called transitory oil-pumping economy had short-lived life cycle for the few living in palaces, not with people. The end-users of the petro-dollar prosperity never planned of what they had no knowledge about the making of a sustainable future.

Arab geography is the by-production of European colonization. Historically, Arabs were nomadic people free to move and trade all over the Arabian Gulf Peninsula and beyond. British, French and Italian demarcated the national borders and extended superfluous nationalities to keep the Arab divided and defeated. While Islam offered the unity of One People - 'One Ummah', the Europeans indulged in massive cultural and political disruptive plans to ensure that Arabs remained fractured and would not re-emerge as One People again. It is historically reported that more than half of a million Arabs were used at will by the then superpowers (British and French) to fight the European national wars during the 1st World War and perhaps more during the 2nd World War.

The Western world has blood at its hands to perpetuate massacres and deliberate pillage of human deaths and destruction across the Arab world. There are no Arab armies, no Arab generals or conscientious leaders to offer sense of security to the entrenched Arab people. This synchronized collective violence and inhumanity against the civilians is a reflection of global upheaval well in progress to destroy the Arab people. If the UNO had the capacity to save the 'succeeding generations from the scourge of war', it should have taken concrete measures to conflict-prevention and conflict resolution. Its failure resulted in continuous killings of millions and others fleeing from the sectarian war zones to Western Europe, Turkey, Greece, Lebanon and Jordan. The UN-Security Council emergency meetings and deliberations on Syria were a laughing stock to critical observers.

Now, the UN is warning the besieged people of Syria, Iraq and Yemen of famine and catastrophic humanitarian ends but failed to stop the killings and aggression. How should one redefine the insanity against the humanity? Is there an international humanity to care for the oppressed and besieged people?   The current crises are a prelude to the undoing of the freedom of Palestine. To the US and West European strategy, Israel comes first because Palestinian leadership devoid of knowledge and intellectual foresight and communication makes no presence in the intellectual-political cultural corridors of liberal democracy. The whole of the Arab world is militarily incapacitated and politically dismantled to allow unhampering evolution to One State solution between Palestine and Israel.

Even the so called PLO leaders are complicit for the failure and missing intellectual leadership to guide the traumatized and besieged Palestinians. Lacking proactive vision and imagination to unite the community and lead a political movement in Palestine, they hold dummy bureaucratic offices and are paid to do nothing while Israeli leaders are active to propagate their own brand of solution negating the peace deal.  If the Arab world had educated, honest and intelligent leaders, they would not be sitting in air conditioned offices but revolving around the globe to present a rational viewpoint on Palestine and to enlist moral and political support to end the Israeli occupation. Other Arab leaders have no sense to support what is right and what is wrong. Some even have secret political alliance with Israel. Truth is one but its simplicity is interpreted invariably by the contemporary geo-politics. Most Arab people live in a complete disconnect to the foreign defined strategic priorities of the geo-political convergence.

The End Game of an Illusion

All over the authoritarian Arab states, the socio-economic, moral and political infrastructures are under threat of extinction as it has already happened in Syria, Iraq and Yemen. The man-made vengeance could complement the failed state scenario. The Middle East was heavily militarized to check the extremism and communism. But its real strategic aims were to maintain and exploit the authoritarian absolutism and keep certain tribal agents and puppets in power to undermine the social and political harmony. That essence is self-reflective in the current affairs of the Arabian tragic sectarian war zones. Why the Arabs are targeted enemies?  Western economies are based on maintaining large scale armed forces and advanced weapon manufacturing capabilities unparalleled in modern history. During the Cold War era, it was assumed to be against the former USSR but no major conflict has ever happened after the WW2. For all rational purposes, military foresight demands adequate preparation to meet the unthinkable strategic challenges. Western strategic thinkers found it convenient to engage the feuding Arab leadership psyche and create fertile grounds to test the effectiveness of new and destructive weapons and to keep the armed forces in readily available operational status. That is where the marriage of convenience took shape to ensure the Arab tribal leaders of continuous Western support for authoritarianism as long as they followed the US-led strategic dictates. The on-going wars are the direct result of this strategic thinking which Arab people cannot detect nor imagine its dreadful consequences. America's list of nameless enemies is open-ended, constantly changing and not specified. President Trump has initiated individualistic move of political mind and power to redefine the American history by targeting seven Muslim countries to ban their citizens from entry into the United States under a false pretext of security and immigration context. His plans are racially motivated and will do more harm to American political image, peace and global security than good to the national interest of the President Trump administration.

Arabs are divided and defeated and their degeneration of moral and intellectual culture is well in progress. There are no legitimate wars for the Arabs to fight except fighting foreign-geared sectarian wars on several fronts without rational thinking and actions. While America and some West Europeans are the reason for this planned destruction of the Arab culture and history, hypocrisy and cynicism mock the Arab leaders and people for their indifference to the compelling realities on the ground. The so called Arabian islands of unimaginable splendor and prosperity for aristocrat class of kings, princes, princess and businessmen, who like the multi-millionaires corporate presidents, found it hard to relate to the common people. While Islam professed and emphasized "shura" - public consultation on major public discourse, the Arab leaders flouted moral and intellectual advice from the learned scholars and educated people. They appear allergic to rational thinking and remedial solutions. There are no public institutions to analyze or discuss the emerging political and military crises. Centuries earlier, in traditional Arab culture, priests, thinkers, community elders, poets and scholars used to initiate participatory dialogue to resolve societal conflicts and advise the rulers/kings with reasoned counseling. Not so, across the bloody centers of humanitarian catastrophes at Aleppo, Damascus, Sana and elsewhere, Arab wisdom and new creative initiatives are missing as if they breathe in a dead-ended corner of moral and intellectual abyss.  Consequently, Arab people are fast becoming victims of their own pitfalls of self-destruction.

If there were any Arabian moral, spiritual and intellectual powerhouses as were the traditional "Deewan" community centers for interactive societal communication and problem-solving, they should have taken initiatives to find peaceful ways and means to end the sectarian barbarity, deliberate bombing and massacres of the innocent civilians. Imagine if such a logical moral approach of reasoning was implied even to the staunch dictators, would Bashar-al-Assad, Saddam Hussein or Ghadafi have escaped the meeting or ignored the noblest figures of the Arabian society? It would have been a blessing in disguise rather than military encounters or warfare. The history speaks loud and clear that few powerful rulers with individualistic absolutism and most often, mentally retarded persons have always driven the mankind to large scale slaughters,  victimization, deprivation and long term scars of why and how it happened, it never goes away from the human memory and written pages of human history. "In our civilized world" wrote Paul Buchheit ("War or Revolution Every 75 Years. It's Time Again." Common Dreams),....people aren't being run down by noblemen or forced to eat grass. The aristocracy has learned a lot about suppressing crowds in 225 years. But they need to fear the growing revolution. They need to fear, as Dickens put it, "the remorseless sea of turbulently swaying shapes, voices of vengeance, and faces hardened in the furnaces of suffering until the touch of pity could make no mark on them."