Syria is one step closer to peace 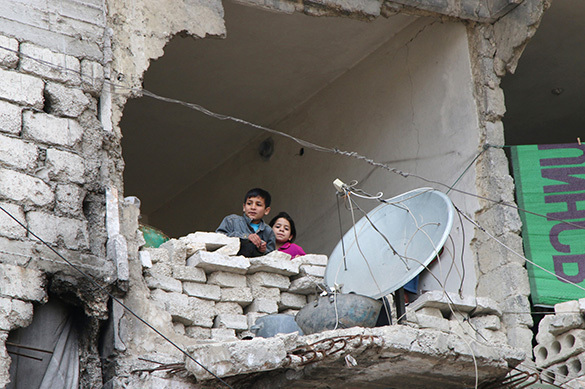 Throughout history, secret and open structures accustomed to manage the world have brought other countries under their hegemony through certain methods. This is often achieved through financial dependency. The banks owned by the secret structures are always ready to step in "as a helper that shows up in hard times." To that end, economic crises are generated, revolts are fomented within countries, rebellions break out and coups are carried out. In this way, angry masses are created. These angry people usually believe that they are fighting, rebelling for the sake of an ideology. But in truth, every one of them has been trained through various propaganda techniques and militarized through subliminal messaging methods.

For many, the Arab Spring that began in 2011 was a struggle for freedom. Sadly, many people of the Middle East could not realize that they fell for the provocations of the aforementioned structures. Although abolishing dictatorships and adopting a democratic government seemed very appealing, they failed to realize the fact that they were overthrowing dictatorships because this was what the said structures desired, and that this was not the way to attain democracy they had long yearned for. These struggles were under the control of the deep powers that were secretly pulling the wires behind the scenes. Therefore, those people always remained under the yoke of the said powers, and they have never been allowed to attain democracy.

The 6th year of the Syrian war marked a gradual increase in the number of those who realized the truth. The deep powers made schemes over the nations of the Middle East, and Syria was still suffering its consequences. This is why the three foresightful, independent countries of the region, which had seen through this scheme, coming together for the issue of Syria was vital, and this was a necessity we had repeatedly mentioned in various columns since the outbreak of the Syrian issue.

Although they do not share a common course, Turkey, Russia and Iran are the three countries that have never broken their consensus over the issue of Syria. The said three countries saw through the sinister plans of the deep powers that sought to extend their influence over the Middle East, and maintain their agreement regardless. The important step taken in Astana regarding the Syrian issue was possible because of the honest alliance between the three guarantor countries of the negotiations. The societies that advocate peace should first be at peace among themselves.

The Astana negotiations were initiated with a crucial joint decision that would frustrate the plans of the deep power groups: The territorial integrity of Syria. This topic, on which all three countries refused to compromise, stands as the evidence that no radical or Stalinist entity can continue its existence within the Syrian territory. This necessitates with the onset of the negotiations the presence of a transitional administration in Syria that will govern the entire country. This transitional administration will not exclude any parties, and bring together the representatives of both the Baath regime and the opposition. The regime and the opposition accepting to participate in the Astana negotiations well aware of all these reasons is a significant step.

But what is really important is that, subsequent to all these stages, the final decision will be left to the people of Syria. It is at this point that democracy will come into play. The decision of the people of Syria should determine who will have the next say in Syria. The long-awaited democracy in the Middle East should not be brought about through uprisings and civil wars, but through election. This is the primary way to break free of the deep powers' hegemony.

The first session of the negotiations was not expected to immediately make a great stride in achieving a political solution. It was a negotiation where the parties were brought together to the table in a way that had never seen before and go through the test of sincerity. Although there were some recriminations back and forth, both sides showed that they did not maintain an obdurate stance in parleying with each other.

Another important progress was the permanence of the ceasefire. In this regard, it is absolutely crucial that the three countries act as guarantors in securing ceasefire through a trilateral mechanism. Because there are groups in the field, through which the said countries can exercise their influence. Establishing the ceasefire will also ensure the continuity of the negotiations, accelerating the solution process.

It should also be noted here that Russia has provided a positive basis for the negotiation by meeting with the opposition. Negotiations between Lavrov and opposition which were held at the Turkish Embassy in Russia is of vital importance with regard to showing the attitude of the parties toward each other has become friendlier and the establishment of a reconciliatory government. The guarantor countries not pursuing strict policies doubtlessly had a favorable impact on the groups and the regime in Syria. Furthermore, as both parties know that the guarantor countries are not under the sway of suspicious deep mechanisms, they have a more positive approach towards peace and reconciliation. Perhaps for the first time, all parties really aspire for peace.

Diagnosis is the most essential step toward the cure. This fact also applies to the interstate matters. The countries that are currently striving for Syria have perceived the vile plots over Syria. These plots are ordinary practices of the deep structures that are accustomed to control and exploit the world. Therefore, their current aim is to involve Syria in this plan. For that reason, Russia, Turkey and Iran are exerting all of their efforts into solving this issue, pursuing a reconciliatory discourse and giving prominence to foresight, trust and love. This is why the involvement of the countries of the region unaffiliated with the deep states is pivotal, and this is why a permanent solution is close at hand. What is needed right now is the groups in Syria seeing the truth and realizing that they have been manipulated.

Taking a look at history, one can see that the countries that are divided and beset with civil strife invariably come under the hegemony of deep structures, and the people are always susceptible to provocations under the pretence of democracy and liberty. Democracy and liberty are indeed beautiful notions. However, the way to ensure democracy and liberties is not through rebellion, anger and hatred. These notions call for the development of an ideological infrastructure and the elimination of all sorts of bigoted sentiments. In order to achieve this, the Middle East first needs to break free of the deep powers' hegemony. A step now has been taken in Syria to that end. The establishment of peace and democracy is closer than ever.