The New York Daily News ran a column this week written by one Gersch Kuntzman aimed at insulting Russia to the core, insulting the family of Ambassador Andrei Karlov, murdered by a Turkish lunatic in the line of duty, comparing today's Russia with Nazi Germany and presenting a pile of bilge to its readers. How low does it get? 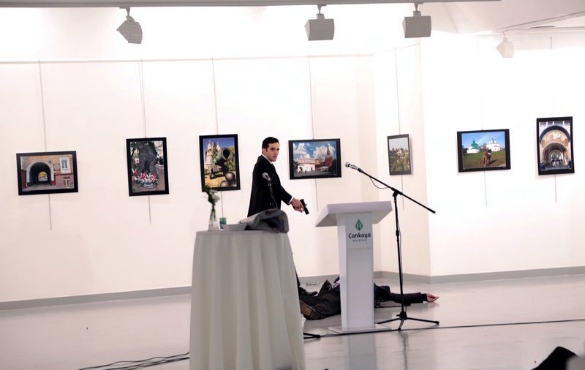 A quick WikiSearch claims that the New York Daily News is the fourth most widely read newspaper in the United States of America, and its main tabloid format daily. From what I have just read, namely an article by one Gersch Kuntzman, what a fitting name, published the day after the murder of Ambassador Andrei Karlov, Hero of the Russian Federation, by a Turkish lunatic in Ankara on Monday as he attended an exhibition of photographs, I question who or what reads this "newspaper".

Kuntzman's piece is entitled "Assassination of Russian Ambassador Andrei Karlov was not terrorism, but retribution for Vladimir Putin's war crimes". Basically the piece says the Ambassador got his just desserts because he represented a global dictator and war criminal, "Putin" and got it because Russia is murdering children in Syria. Just because.

Two possibilities: if Kuntzman really believes what he wrote, how come a newspaper is publishing his lies, distortion and disgusting degree of disrespect? Or if Kuntzman is stirring things up by peddling nonsense, then how much respect does he have for his readers and how seriously should anyone take the New York Daily News? Either he is incompetent to write for the publication, or the publication itself is a rag.

Kuntzman will hopefully destroy the NYDN

This means that if the New York Daily News readers actually believe the propaganda in its pages, they are being deliberately misled and misinformed and so in 2017 hopefully people will drop the publication like a hot coal and Kuntzman will be responsible for its demise. In this column I shall take the pleasure of outing this wonderful source of disinformation and hopefully by 2019, its centenary, it will have closed. Good riddance. Or else maybe Kuntzman will have been sh*tcanned and the publication will move towards publishing news, real news.

For a start, how dare he insinuate that a murder is deserved, then how dare he compare Russia to Nazi Germany. I suppose for Kuntzman and the rag he writes for, the twenty-six million souls that the USSR lost fighting against Nazi Germany freeing the world of and protecting the world from Fascism does not count. By his own token, if Kuntzman was gunned down tomorrow by someone who had lost a relative in an attack by a US war plane, his own newspaper could write a piece saying the killing was justified because the USA has perpetrated war crimes across the globe. That wiped the smile off his snout, did it not?

And speaking of which, what war crimes is he stating that Vladimir Putin committed? What Kuntzman wrote is libel unless he has evidence. So I challenge Kuntsman and the NYDN to state  categorically, what were Vladimir Putin's war crimes in Syria??

And more, I hope he is prosecuted for it, in fact I hope someone sues the as* off him and the so-called newspaper that prints his hatred and cavorts with terrorism by doing so. So here are some questions for Mr. Kuntzman and the New York Daily News, and its readers:

Russia does not create and cavort with terrorists

The terrorists sliced the breasts off women

Does Mr. Kuntzman know what these hordes of Baal have done in Libya and Syria? Does he know they sliced the breasts off women in the street? Does he know they attacked and murdered policemen and soldiers, ripping open the bodies and eating livers and hearts? Does he know that they have murdered ambulance service personnel? Does he condone these actions? Does his newspaper agree with these monstrosities? Does he know many of these terrorists are not even Syrian? Does he know al-Assad has the support of 70% of his people?

Does Kuntzman know that the terrorists Russia is fighting raped girls before and after they were beheaded and after being forced to watch their fathers being sodomized and their mothers raped and having their throats slit and having their vaginas ripped open up to their throats? So in attacking the only person in the world with the cujones to stand up against this sh*t, Kunzman and the New York Daily News are trying to defend this terrorist crap, saying they are the victims? So suppose they go to Syria and present their own womenfolk for these psychopaths to abuse, will they then print a piece showing Kunzman curled up giggling and will the NYDN say the atrocity was justified?

Russia does not create terrorists, it fights them

Russia is not committing war crimes, Russia is fighting terrorists. Russia is taking every care to reduce civilian casualties, who is Kuntzman trying to insult? Does he really think his readers in the USA are that stupid they believe the crap he writes? If he bothered to do any research, if his newspaper had an iota of credibility, he and they would know that Russia has set up field hospitals to care for the casualties and delivers, daily, supplies to the cities infested by terrorist filth - filth in some cases receiving orders from the good old US of A.

And people(?) like Kuntzman attack those man enough to stand up and fight these demons and gloat at the deaths of those dying in the line of duty? One supposes that he prefers to allow terrorist filth to infest Syria, than to stand up to it, sterilize the areas infected with this demonic scourge, liquidating terrorist elements, exterminating their command centers and allowing people to get on with their lives.

I sincerely hope Kuntzman is man enough to apologize to Vladimir Putin but I would wager that he will not because he isn't and I would wager that the publication he represents could not care less. We will see whether they are laughing and gloating at the death of persons carrying out their duty at this time next year.

What a disgusting person Kuntzman must be, how ignoble, how vile, how pig-ignorant. Just another schmuck trying to make a fast buck at the expense of everyone else's happiness. How this creature looks at itself in the mirror in the morning and doesn't puke, God alone knows. But then again, morals and ethics don't work for the soldiers of the Devil. They defy logic. They print lies, they spread hatred, they are terrorists.

So Mister Kuntzman... you made your bed, now you lie in it. You are an insult to journalism and an even greater insult to Humankind. What you wrote will go down in the annals of history as exactly why people hate the United States of AmeriKKKa. Congratulations.

Now enjoy your Xmas, and don't choke on the turkey in your annual fest of gluttony.