USA: The witch hunt must stop 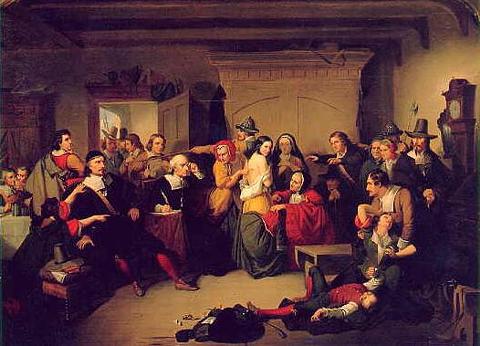 There is a witch hunt going on in the United States of America.  Only instead of a witch they are looking for a racist, in the human form of one, Donald J. Trump.  "Oh my god, did you hear what he said to a Black worker in 1972?"  "I heard a friend, who told a friend, who heard it from a neighbor that he called Black people "lazy" in 1961." Liberals feel if they can prove that Trump is a racist, then their world would be righted, and they would be vindicated in their moral superiority, and their belief a heinous shadow of doom has fallen over the US.

Article after article is being written about the racism of Mr. Trump.  It is becoming a national obsession.  "Donald Trump's Deep Seated Racism" Chicago Tribune September 28, 2016. "Donald Trump is a Bigot and a Racist" Washington Post, with the opening line, "Let's not mince words: Donald Trump is a bigot and a racist." Or, Huffington Post's, "Here are Thirteen Examples of Trump Being a Racist".  We are told in 1991, someone remembers Trump calling Black people "lazy".  Or in 1998, a Black teenager remembers a manager telling him not to let Trump see him working in his club.  This offense allegedly happened a quarter of a century ago, and may or may not be true.  But, hey, it's news.

Let's assume it is true.  Over twenty years ago Trump made an insensitive and offensive remark.  Okay.  Now, lets look at Hillary Rodham Clinton.  According to the New York Times, "The Clinton Foundation has accepted tens of millions of dollars from countries that the State Department - before, during and after Mrs. Clinton's time as secretary - criticized for their records on sex discrimination and other human-rights issues. The countries include Saudi Arabia, the United Arab Emirates, Qatar, Kuwait, Oman, Brunei and Algeria.Saudi Arabia has been a particularly generous benefactor. The kingdom gave between $10 million and $25 million to the Clinton Foundation."

Saudi Arabia is the KKK on steroids

Saudi Arabia is the KKK on steroids.  It does not just spew hate, it executes, it maims, it tortures.  According to Wikipedia, "The very strict regime ruling the Kingdom of Saudi Arabia is consistently ranking among the "worst of the worst" in Freedom House's annual survey of political and civil rights. Qorvis MSLGroup, a US subsidiary of Publicis Groupe, amid the execution of political protesters and opponents, has been working with Saudi Arabia for more than a decade to whitewash its record on human rights.  Incredible, a US company trying to whitewash the horros of Saudi Arabia.  Might make Hillary look better for taking their millions?

Saudia Arabia is a country that executes gays, does not allow women to drive, try on clothes in dressing rooms, open bank accounts without husband or father. An article in Common Dreams, June 2016, states, "Yet when the UN recently added the Saudi-led coalition to a blacklist of armed groups killing and maiming children around the world, the oil-rich country threatened to withdraw funds from a UN program, prompting UN leader Ban Ki-Moon to remove the Kingdom from the ignoble list.

Saudi Arabia's abuses in Yemen are hardly the half of it, rights advocates point out. Richard Bennet, head of Amnesty International's UN office, delves into the country's appalling record on human rights:

As a member of the Human Rights Council Saudi Arabia is required to uphold the highest standards of human rights. In reality, it has led a military coalition which has carried out unlawful and deadly airstrikes on markets, hospitals and schools in Yemen. The coalition has also repeatedly used internationally banned weapons in civilian areas. At home it has carried out hundreds of executions, put children on death row after grossly unfair trials, and ruthlessly repressed opposition and human rights activists."

Dear readers, Saudi Arabia makes the KKK look like chicken shit.  And, yet, not a peep about over ten million dollars into the Clinton's coffers from this reprehensible nation.  Not a peep from women's groups.  Not a peep from leftist liberals.  Business as usual.  The hypocrisy of Trump's "racism" and Hillary's grandma image is stunning in the light of her taking millions of dollars that are tainted with the blood of the dead.

The smoking gun.  Here is the smoking gun for the witch hunters.  Mar-a-Lago.  Donald Trump's chi chi private club in Palm Beach.  The Daily Caller reports, "According to the Wall Street Journal and the Anti-Defamation League, Donald Trump is largely responsible for desegregating Florida's wealthy sporting clubs.  The Anti-Defamation League praised his actions for "elevating the issue of discriminatory policies at social clubs. He put the light on Palm Beach," then ADL national director Abraham Foxman said after meeting with Trump on the issue. "Not on the beauty and the glitter, but on its seamier side of discrimination. It has an impact."

Kalli Joy Gray writes, "As soon as Trump moved into the neighborhood, he clashed with the Palm Beach establishment, battling them in a series of lawsuits. Trump alleged that the town was discriminating against him and his club because it was open to Jews and African Americans. At one point, Trump's lawyer sent each town council member a copy of two movies about discrimination: "A Gentleman's Agreement," about a journalist who pretends to be Jewish to expose anti-Semitism, and "Guess Who's Coming to Dinner," about a white couple's reaction to their daughter bringing home a black fiance, The Washington Post reported."

Case closed.  With the pressing problems facing the United States of America: jobs being sent overseas, deadly violence in our cities, Obamacare skyrocketing in cost and many still not able to pay for medications, infrastructure rotting, riots, school scores falling, oxy/heroin epidemic, a Congress sick with bribes in the form of lobbyist money, this witch hunt must stop.

Liberals must suck it up.  Their candidate lost.  And, more to the point she took millions from a country that made the Trump witch hunt look like child's play.  What if Trump took over ten million from the KKK?  She did, from a country far worse than a bunch of KKK losers who spew hate, as vile as that is.

The United States needs to put on it's big girl pants and get on with the work of healing the country.  This cannot be done with childish witch hunts that waste time and energy when the hard work of addressing the massive problems that face the land are begging to be solved.