Syria, the UK and Funding the "Moderate armed opposition"

A document (1, pdf) produced last December by the UK Foreign and Commonwealth Office, headed: " UK Humanitarian Aid in Response to The Syria Conflict", makes interesting reading. The British government it states, has spent "over £100 million" since 2012, "working closely with a range of actors" to "find a political solution to the conflict and prepare to rebuild the country in the post Assad era." (Emphasis added.) 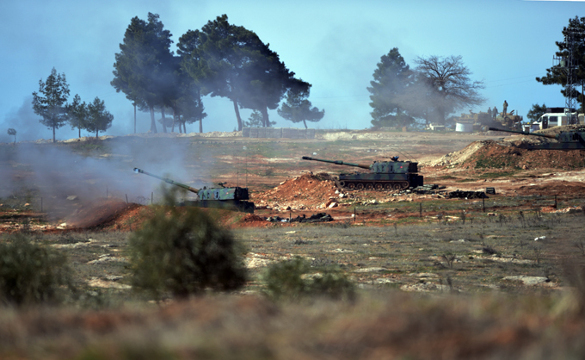 "Our efforts ... include providing more than £67 million of support to the Syrian opposition."

Interfering in the internal affairs of a sovereign nation: A crime

One of the "actors" to benefit from hefty chunks of British taxpayers moneys is the Syrian National Coalition whose website states, under "Mission Statement and Goals": "The coalition will do everything in its power to reach the goal of overthrowing the Assad regime ..." and to "Establish a transitional government ..." (Emphasis added.) Thus the UK government is overtly supporting the illegal overthrow of yet another sovereign government.

This all reads like a re-run of Ahmed Chalabi's Iraq National Congress and Iyad Allawi's Iraq National Accord, backed by the British and US governments to equally criminally overthrow Saddam Hussein.

Iraq's football pitches, gardens and back yards turned graveyards, probably three million deaths between the embargo, the 1991 thirty-two country assault, the 2003 blitzkrieg and invasion - ongoing - the ruins of the "Cradle of Civilisation" of which Syria is equally custodian, are silent witness to that gargantuan crime against humanity - and history. Will Washington and Whitehall never learn - or is destruction of civil societies, Nazi-like aggression, illegal overthrows and rivers of blood their raison d'être?

Incidentally, Foreign Office accounting farcically includes: "more than £29 Million to reduce the impact of the conflict on the region." Stopping dropping British bombs would surely be the most practical way to do that - and persuading their US "coalition partners" to do the same. Yet more nauseating, murderous, hypocrisy.

Talking of reducing "the impact of conflict on the region" - here is what the UK is contributing to destroying it - courtesy again the (un-consulted) British taxpayer:

"Two Tornados are typically used for each flight, and each flight lasts anywhere between four and eight hours. Even at the lowest estimate, each flight costs £140,000.

"Their cargo is four Paveway bombs and two Brimstone missiles, costing £22,000 and £105,000 per unit respectively.

The British government document informs that: "To date, there are over 2,700 volunteers in 110 civil defence stations across northern Syria, trained and equipped with help from UK funding ... The 'White Helmets' as they are more commonly known ... " The "White Helmets" of course, only work in the areas held by the "moderate" organ eating, child decapitating, human incinerating, crucifying "opposition."

In Foreign Office parlance, under the heading: "Moderate armed opposition: £4.4 million", it is explained that this has been devoted to "life-saving equipment", presumably for the head choppers since the "life savers" appear to be their guests. Indeed the "White Helmets" website states that: "They are the largest civil society organisation operating in areas outside of government control ..." (Emphasis added.)

Also, near farcically, the Foreign Office informs: "We have also funded Law of Armed Conflict training to help commanders train their fighters to understand their responsibilities and obligations under international human rights and humanitarian law." Given their track record of near unique, mediaeval barbarity, the "training" is clearly falling on deaf ears.

The UK of course, is in no position to lecture on the law of armed conflict since the newly unelected Prime Minister, Theresa May, has vowed to halt all cases against British service men and women brought by Iraqis who allege torture, murder of relatives, and varying unimaginable abuses. So much for "responsibilities and obligations under human rights and humanitarian law."

British generosity is seemingly boundless in murderous meddling in other nations. "Media activists" have been given £5.3 million:  "UK funded projects are helping establish a network of independent media outlets across Syria, whose work has included sending out messages about personal safety after the regime's chemical weapons attack in Ghouta and, more recently, active reporting produced by civil society groups and the likes of the 'White Helmets' across Twitter and Facebook accounts."

The "regime's chemical weapons attack on Ghouta" has of course, been roundly disproved despite the best efforts of Western propaganda. As Eric Draitser has written:

"What makes that incident significant, both politically and historically, is the fact that, despite the evidence of Syrian government involvement being non-existent, the Obama administration nearly began a war with Syria using Ghouta as the pretext.

"As the months have passed however, scientific studies amassing an impressive body of evidence have shown that, not only were Washington's claims of 'certainty' that Assad's forces had used chemical weapons in their war with extremist fighters utterly baseless, but in fact the reality was quite the opposite - the rebels were the most likely culprits of the attack."

The cynic might ponder that funding "media activists" and the "The White Helmets" to possibly "actively (mis)report" is blatant propaganda. As the propoganda master, Joseph Goebbels knew: Propaganda is the art of persuasion - persuading others that your 'side of the story' is correct - with mega money and resources thrown at the "persuasion."

The UK's arguable illegal munificence also extends to: " ... working with other international donors to establish and build up the Free Syrian Police (FSP) a moderate police force in opposition-controlled areas ... "

Breathtaking. Another re-run of Iraq: disband the police, army, all structures of State - and Iraq is the soul searing, haunting, admonishing ghost, mourning the vibrant, cohesive, civil society (for all its complexities, as most societies) it was prior to the embargo and Iraq Liberation Act (1998) which stated that: "It should be the policy of the United States to support efforts to remove the regime headed by Saddam Hussein from power in Iraq..." and signed into law on 31st October 1998, by President Bill Clinton.

As mentioned previously, there is now of course the Syria Accountability and Liberation Act of 2010 (H.R. 1206.) Spot the parallels.

"The White Helmets" have also benefitted from $23 million from the US, according to State Department spokesman, Mark Toner (27th April 2016) and €4 million from the government of the Netherlands. Last week Germany announced increasing this year's donation to ‎€7 million. Japan has also chipped in.

A great deal of money, it would seem, is being thrown at insurgents and illegal immigrants in a sovereign country, awarding themselves the title of Syrian Civil Defence. Yet they do not even have an emergency telephone number. As Vanessa Beeley has pointed out in extensive writings on the subject, the real Syria Civil Defence was established in 1953, is a Member of the International Civil Defence Organisation whose partners include the UN Department of Humanitarian Affairs - and as all national emergency services, they have a telephone number: 113.

Among the myriad tasks the "White Helmets" claim to undertake is: "The provision of medical services - including first aid - at the point of injury." Why then were they trained not by expert first responders, paramedics, civil emergency operatives, but by a mercenary, sorry "private contractor"?

According to Wikipedia: "Founder of Syria's White Helmets, James Le Mesurier is a British 'security' specialist and 'ex' British military intelligence officer with an impressive track record in some of the most dubious NATO intervention theatres including Bosnia and Kosovo, as well as Iraq, Lebanon, and Palestine. Le Mesurier has also been placed in a series of high-profile posts at the United Nations, European Union, and the Foreign and Commonwealth Office."

"James has spent 20 years working in fragile states as a United Nations staff member, a consultant for private companies and the UK Foreign and Commonwealth Office, and as a British Army Officer. Much of his experience has involved delivering stabilisation activities through security sector and democratisation programmes. Since 2012, James has been working on the Syria crisis where he started the Syrian White Helmets programme in March 2013. In 2014, he founded Mayday Rescue, and is dedicated to strengthening local communities in countries that are entering, enduring or emerging from conflict. (Emphasis again added.)

"Democratisation programmes" eh? George Orwell's "Nineteen Eighty-four" had a "Re-education Committee", but let's not get too carried away.

On Tuesday 11 October 2016, the UK's arguably combative Andrew Mitchell MP, ex-Royal Tank Regiment, who allegedly called Downing Street Police after an altercation "f ***** g plebs", was granted an emergency three-hour debate in the House of Commons on Syria after allegations by the 'White Helmets' that Russian military jets and Syrian helicopters were bombing civilians in eastern Aleppo.

Mitchell stormed the debate all guns blazing, calling the alleged situation "akin to the attack on Guernica during the Spanish civil war" and suggesting the RAF should be empowered to shoot down Russian and Syrian aircraft. He also pushed for a "no fly zone." As is known from Libya, that is a Western-only fly zone obliterating all in its sights. Guernica indeed.

Again of course, all but Russian and Syrian aircraft are there illegally, but  Andrew Mitchell is being advised among others by former CIA Director General David Petraeus, who was also former Commander of US Forces in Afghanistan and of Multinational Forces in Iraq. Not really a mini think tank, some might speculate, where the rule of law is going to have highest priority.

Mitchell also called for extra funding for - you guessed it - "The White Helmets."

Incidentally, there are rigid protocols for first responders, paramount among which is to protect the injured, the traumatized, from publicity and identification, in their vulnerability.

"The White Helmets" are seemingly never without camera crews handy recording a small body, face facing the camera, dust covered, blood spattered, clothes awry, in the arms of the "rescuer."