Guterres, the G-spot in international relations

António Guterres, the People Person, represents the very thing the international community needs at this delicate moment in time, namely dialogue, debate and discussion, the fundamentals of democracy. The personal history of António Guterres, chosen as the next Secretary-General of the UNO, makes him the G-spot in international relations. 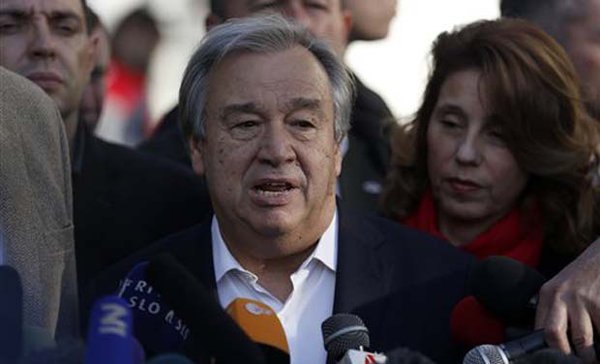 António Guterres' personal political epitaph stands in Portugal over a decade after he resigned as Prime Minister after winning two elections, and that epitaph is one of a compassionate, caring and thoughtful leader who aligns himself with and feels social issues, favoring an inclusive and egalitarian society and striving to achieve these ideals not only in his public and political life, but also in his personal time. He is a man of principles, of values, of action and courage. He stands against the vested interest, he stands up against the lobbies and looks them square in the eye. Guterres is no Portuguese pushover, he represents one of the world's oldest nations, home to one of the most widely spoken languages worldwide, the Super Power of the 1500s, which built 3,000 fortresses between Ceuta and Malacca, dominating the coastline around Africa, Arabia, Persia, India and Asia and across the Ocean, giving itself Brazil (by Tordesillas) before it was officially encountered in 1500.

His compassion and caring stem from his personal approach, which is forming consensus through sharing ideas and this means respecting the fundamental precepts of democracy - debate, discussion and dialogue over the ABC of prepotence, the Arrogance, Bullying and Chauvinism approach favored by NATO - and respecting international law, namely following the terms of the UN Charter and not breaching it, another approach favored by the USA and its sickening NATO lapdogs in Europe.

If we take a good look at the world around us today, we see multiple examples of why conflicts have started and continued, and the bottom line is a lack of dialogue. Once again we have two "sides" - the broad coalition called NATO, led by the FUKUS Axis (France-UK-US) and the defenders of the social model, those who respect the hearts and minds of the citizens of the world, namely the BRICS, most of Latin America, most of Africa, most of Asia and most of Oceania.

One one side we have NATO, which represents the interests of the $inister $ix $isters, the BARFFS Lobbies (Banking, Arms, eneRgy, Finance, Food, Pharmaceuticals) which pull the strings of the political leadership of western countries in general, while NATO acts as the cutting edge in implementing policy through a Bible and Bullet approach. This side does not respect international law, does not respect the UN Charter, does not respect the norms and covenants signed since Westphalia in 1648, breaches the conditions of the treaties it signs, breaches the terms of the Geneva Conventions and commits war crimes, interfering in the internal affairs of sovereign states, targeting civilian structures with military hardware, and lying in the media, using the Press and TV channels as brainwashing tools to whitewash their crimes.

This side is universally despised, universally hated and universally antagonistic to the good will of the citizens of Earth 2016. On the other side is very much the position and approach defended by the Russian Federation, by the PR China, by Brazil and most of Latin America, by India, by Malaysia, by Indonesia and most of Asia, by South Africa and most of the African continent, namely a multilateral approach to crisis management, sitting all the players round a table and reaching an agreement, achieving peace, development and education - rather than war, destruction and deployment of troops.

This peaceful approach is evidently not possible with the unilateral, holier-than-thou, top-down approach adopted by the powers which only yesterday were drawing lines on maps and ruining lives and livelihoods of entire peoples over many generations. These are the ones that practised and enriched themselves by slavery, these are the ones that practised colonialism and imperialism, carving up communities, stealing resources.

When they told me that the Bulgarian Lady Mark II, Kristalina Georgieva, who was fast-tracked into the list of contestants for the UN top job, was the favorite of Merkel, Nuland and the heads of the IMF and World Bank, and when they told me that António Guterres had won against these odds, something smiled in my heart.

Let us watch António Guterres do his work. The Lobbies had better fall into line like everyone else, understand that this planet belongs to all of us and respect the law. There's a new sheriff in town. E este xerife se chama António Guterres, e é português!