While the NATO countries are busy spending opne point two trillion USD on their collective military spending per year each and every year, repeated calls for help in South Sudan have gone practically ignored and today around one hundred thousand people are trapped in Yei with no escape and fighting blazing all around them. 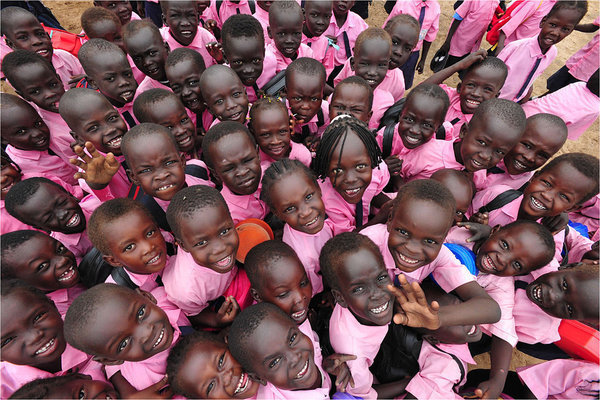 The UN High Commission for Refugees (UNHCR) warns that humanitarian assistance for the farming communities trapped in Yei is "urgent", after the area became caught up in the violence which has gripped the UN's newest state since December 2013. Those owho have been involved directly in bush wars in Africa understand the intensity of the violence, which is random, sometimes without any reason and targets the weakest along with armed forces.

Women are hacked to death

Women are hacked to death, before or after being raped, girls the same, or worse, young boys beheaded or hacked to pieces or forced to join the conflict after being forced to kill their families, whose last words are "go ahead son, save yourself, kill us". Houses are torched, livestock hacked to bits and thrown on the flames.

"This is the first time that the population in Yei - primarily farmers living on commercial and subsistence agriculture - has become a direct target of violence, and on suspicion of their belonging to opposition groups. They urgently need humanitarian assistance" (UNHCR)

Yei, Central Equatoria state, close to the border with Uganda and the Democratic Republic of the Congo, has seen 30,000 people flood into town since attacks on neighboring regions on September 11 and 12, joining the 60,000 residents and a further ten thousand refugees from Lainya.

It's playing out yet again

UNHCR claims that "tens of thousands of displaced are sheltering in abandoned houses and smaller numbers in church compounds and are facing a serious shortage of food and medicine. Terrorized men and women spoke of horrific violence against civilians before and during their flight, including assault, targeted killing, mutilation, looting and burning of property", stated a spokesperson for the High Commission.

He continued: "Several civilians have been hacked to death, including women and infants. There are reports that many young men, aged between 17 and 30, have been arrested on suspicion of siding with the opposition. Displaced people need food, household items, medicines and the children need access to schools".

Given the situation, the price of foodstuffs has become inaccessible to most of those caught up in this nightmare. The few food stocks that did exist have been looted. Children are becoming malnourished, babies are becoming ill or dying. The population cannot flee because there is nowhere to go, fighters (armed thugs, murderers, torturers and rapists) are closing in. Fields are untended, so this year's crop is rotting and next year's will not exist. South Sudan has over one million refugees in neighboring countries and 1.61 million internally displaced.

But this is nothing new. On March 16 this year, I posted the following news story:

Women and girls are being treated as commodities, sex slaves and objects of torture. People are being burnt alive, hacked to pieces or gang raped, the most shocking examples of wanton violence the African continent has seen since NATO-backed terrorists swarmed into Libya's cities cutting the breasts off women in the streets.

From April to September 2015, the Office of the United Nations High Commissioner for Human Rights (OHCHR) recorded 1,300 cases of rape in just one of South Sudan's ten States, the State of Unity, which is rich in oil. Zeid Ra'ad al-Hussein, the UN High Commissioner for Human Rights, stated: "The scale and types of sexual violence - primarily by Government SPLA forces and affiliated militia - are described in searing, devastating detail, as is the almost casual, yet calculated, attitude of those slaughtering civilians and destroying property and livelihoods."

The latest UN report on South Sudan speaks of acts of horrific violence in "searing detail" -people being burned alive, hacked into pieces with machetes, people suffocated in containers, shot, hanged from trees or else gang-raped. Worse, Zeid Ra'ad al-Hussein considers that the quantity of rapes reported is probably "a snapshot" of the total, as soldiers moved through villages raping all the women and girls they encountered. He also complained that one of the worst human rights cases in the world has been virtually "off the radar". One woman was tied to a tree and forced to watch her daughter being raped by ten soldiers, another was strippednaked and raped in front of her children, then taken into the bushes to be raped again and when she came back her children had disappeared. Children have been raped, maimed and kidnapped.

The report was drawn up by an assessment team sent to the world's newest country to document evidence, acting from October 2015 to January 2016. It denounces "attacks against civilians, rape and other crimes of sexual violence, arbitrary arrest and detention, abduction and deprivation of liberty, disappearance, including enforced disappearance, and attacks on UN personnel and peacekeeping facilities" from all parties.

War crimes and crimes against humanity

Every time an area changes hands, there is an attempt by the new invader to ethnically cleanse the region of all civilians.

In this country of 12 million inhabitants, around 70 languages are spoken. Under British rule, preference and power were given to the Moslem Northern Sudan over the Christian South and after independence in 1956, the first Sudanese Civil War saw the South gain autonomy under the Southern Sudan Autonomous Region settlement from 1972 to 1983. The second Civil War ensued and ended with the Comprehensive Peace Agreement in 2005. In 2011 a referendum enshrined South Sudan as an independent State when almost 99 per cent of the population voted to secede from Sudan.

The United Nations High Commissioner for Refugees has warned this week about the potential humanitarian crisis in South Sudan, where renewed outbreaks of fighting have caused over two hundred thousand people to flee across the border into Ethiopia.

The fighting broke out in South Sudan at the end of 2013, in December and since then over two hundred thousand people have been forced to flee their homes. The United Nations High Commissioner for Refugees (UNHCR) has warned that the number is set to increase.

The UNHCR representative in Gambella, Ethiopia, Alexander Kishara, has stated that registration processes have indicated increasing numbers of refugees crossing the border into Ethiopia, adding that "UNHCR is also working with partners to provide water, sanitation and shelter".

The UNHCR has observed the arrival of around one thousand new refugees per month during the first few months of 2015, increasing sharply to four thousand in the month of April. There are around 190,000 in the area around Gambella and a further 3,000 in Benishangul-Gumuz. Now in early May, the entries at various checkpoints into Gambella region number some ten thousand.

The UNHCR states that these new arrivals have been "walking for several days through the bush with little or no food and water and carrying few or no belongings", this being an indication that they have been forced to flee increasing violence, and in a hurry.

There are currently sixty thousand refugees from South Sudan at the Pugnido Refugee Camp in Ethiopia and another fifty thousand at the Tierkidi Refugee Camp. Most of the refugees are the elderly, women and children, running away from renewed fighting in Upper Nile State and Jonglei State. There are also some young men among the refugees, stating they have fled forced conscription in the armed forces.

Ethiopia, already with its own problems, is home to some seven hundred thousand refugees, not only from South Sudan - there are sizeable communities from Somalia, Eritrea and Sudan itself.

Once again, a looming humanitarian crisis which does not even figure among the main news stories of the day in a world which spends trillions of dollars a year on weapons.

Round and round in circles, goes our futile world

From rape to blatant murder, round and round we go

The tears of helpless nightmares, baby and child lay dead

Tears, they taste of salt, whoever may them shed.

The fickle nature of Homo sapiens sapiens...who can place a satellite on a comet, can spend trillions on weapons systems to destroy people, cannot beat the common cold, has no idea how animals communicate and doesn't care when hundreds of thousands of people cry out in panic, like those in South Sudan, as Homo sapiens sapiens doesn't even bother to look on.