"In every age it has been the tyrant, the oppressor and the exploiter who has wrapped himself in the cloak of patriotism, or religion, or both to deceive and overawe the People." (Eugene Victor Debs, 1855-1926.) 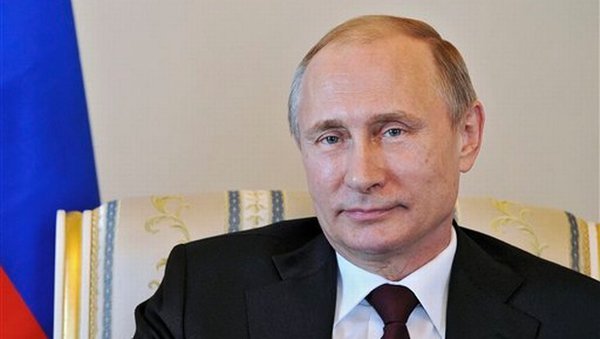 Oh dear, as the fantasy of Vladimir Putin as "Vlad the Terrible" ratchets up in the US-UK-NATO driven new Cold War, the Independent runs a piece headed: "What lies behind the new Russian threat to Ukraine", the sub-heading is: "Vladimir Putin, his opponents repeatedly point out, has form on this. The war between Russia and Georgia took place in 2008 at the time of the Beijing Olympics"

A hard task to find the Russian threat to Ukraine

Trying to find the "Russian threat to the Ukraine" is, as ever, a hard task. It was of course the US which organized the February 2014 coup which replaced the legitimate government and reduced yet another country to chaos. Russia however also appears the victim in a recent incident which triggered the Independent article which Katehon describes with admirably clarity:

"A Ukrainian group of saboteurs was arrested last week (10th August) by Russia's secret service, the FSB. It was revealed that the Ukrainians had intended to organize terrorist attacks in Russian Crimea. During the arrest, two Russian citizens from the Federal Security Service and military of the Armed Forces were killed. This tragic incident has provoked tensions between Ukraine and Russia. The Ukrainian regime has begun to move its troops towards the border with Russia and the republics of Donbass, preparing for an invasion."

Ruussia is not encroaching on Ukraine, Ukraine is conducting terrorist acts against Russia

Thus Ukrainian forces are thus encroaching on Russia, not the other way round. Moreover, according to The Telegraph (10th August): "Russian security agencies said on Wednesday that two Russians were killed as they thwarted Ukrainian commando raids into Crimea over the weekend." (Emphasis added.) The paper expands:

"The FSB said the agent who died was killed during an overnight operation on Saturday and Sunday, when officers smashed a 'terrorist' group and seized an arms cache including twenty homemade explosive devices. The Agency claimed Ukrainian forces tried to 'break through' twice more on Sunday night and Monday morning, killing a Russian soldier."

"Obviously, this hostile activity is coordinated with the United States and NATO, which want to unleash a new war on the border with Russia. At the same time, the US leadership believes that Russia will not inflict a crushing defeat on Ukraine and thereby objectively lower its status in the geopolitical confrontation by trying to solve an insolvable conflict. At the same time, the United States wants to show 'Russia's aggressiveness' to Europe."

Faithfully toeing the West's misteaching mantra, the Independent article dropped in: "Crimea has not experienced serious military action since it was annexed from Ukraine by the Kremlin in the chaotic aftermath of the Maidan protests."

Crimea of course, was not "annexed" by a marauding Russia as is implicated.

Only two years ago the paper wrote of the referendum (16th March 2014( held in Crimea - arranged by Crimea, not Russia - in which over 95% of voters made their feelings clear over the US engineered coup:

"Fireworks exploded and Russian flags fluttered above jubilant crowds on Sunday after residents in Crimea voted overwhelmingly to secede from Ukraine and join Russia ... after the polls closed late on Sunday, crowds of ethnic Russians in the regional Crimean capital of Simferopol erupted with jubilant chants in the main square, overjoyed at the prospect of once again becoming part of Russia." The referendum was monitored by 135 international observers from 23 countries.*

Russia thus had not aggressively "annexed" Crimea, the people had voted to secede. Definition of referendum: "A general vote by the electorate on a single political question which has been referred to them for a direct decision." (Oxford Dictionary.) At the time of the referendum Russia anyway had a lease on Crimea until 2042 under the Kharkiv Pact.

On the day of the referendum the White House released a statement ending, apparently without irony:

The USA invaded or interfered in 33 countries

This from a country that has, since the end of World War 11, "forcibly seized", invaded, interfered in or decimated thirty three countries to 2011 - not counting Syria and Ukraine subsequently.

As for: "The war between Russia and Georgia took place in 2008 at the time of the Beijing Olympics", in the Independent's epic bit of Russia bashing:

"Leaked State Department documents provide further evidence that United States authorities knew that the ex-Soviet republic of Georgia, a key ally of Washington in the Caucasus region, initiated the August 2008 war with Russia.

"Cables from US diplomats in the Georgian capital, Tbilisi, were released through the whistleblower website WikiLeaks. They show that Washington was well aware that the Georgian government was intensifying its military build-up near the breakaway province of South Ossetia in the weeks before the outbreak of full-scale hostilities."

"The Georgian assault on South Ossetia, launched August 7, involved the shelling of the main city of Tskhinvali followed by a ground invasion by 1,500 troops. The operation destroyed hundreds of civilian properties and claimed the lives of an estimated 160 South Ossetians and 48 Russian military personnel.

"Despite this knowledge of Georgian military preparations, once the war began, US ambassador John Tefft simply relayed the claims of Georgian President Mikhail Saakashvili that Russia was the aggressor."

The pretext for the attack was US ally Georgia's allegation of an imminent Russian attack.

The subsequent investigation into the invasion and destruction, held under Swiss diplomat Heidi Tagliavini, found that: "None of the explanations given by the Georgian authorities in order to provide some form of legal justification for the attack", were valid.

"In particular, there was no massive Russian military invasion under way, which had to be stopped by Georgian military forces," Tagliavini confirmed.

"There is the question of whether the force by Georgia during the night of 7/8 August was justifiable under international law. It was not ...", the investigators found.

It was: "The shelling of Tskhinvali by the Georgian armed forces during the night of 7 to 8 August 2008" which "marked the beginning of the large-scale armed conflict in Georgia", the Report stated. Thus Georgia's belligerence triggered Russia's response in defence of an allied country, Russia's own military personnel and Russia's three military bases there.

The parallels between the Georgia and Crimea disinformation are stark, whether orchestrated by political Western Cold Warriors, or media ones.

"We really don't conceal what is known, we show people who were detained, stores with weapons and munitions, which were detected in the Crimea. Of course we cannot show everything on TV, but we have irrefutable evidence that it was sabotage, which had been masterminded by the main directorate of intelligence of the Ukrainian Defence Ministry and aimed to destabilize the Russian Crimea."

He added: "Russia is open for provision of additional facts ... to our Western partners, who are seriously interested in avoidance (of a repeat) of what happened in the future. For that to happen, one should influence Kiev", he added pointedly.

So why the Independent's strange interpretation of above events and creating a fantasy of Russia planning an Olympic timed war? Heaven forbid it would be anything to do with their owner, Russian billionaire and former KGB agent Alexander Lebedev, who bought the ailing newspaper for just a £1 in March 2010, pledging major financial backing.

The Independent, built a name on foreign policy expertise, but this year has been forced to shut down the main daily print version and the Independent on Sunday. Whilst the Independent is still on line, the only hard copy in it's stable is the good, but more limited daily "I."

Billionaire backers are rare in these straightened times. Mr Lebedev is a Putin critic. The cynic might say there could be a connection given the slant of the Crimea story. However with titles Alexander Lebedev has backed (8) at home and abroad, he has always vowed never to interfere with editorial policy, so many would surely regard such thoughts as conspiratorial rubbish.