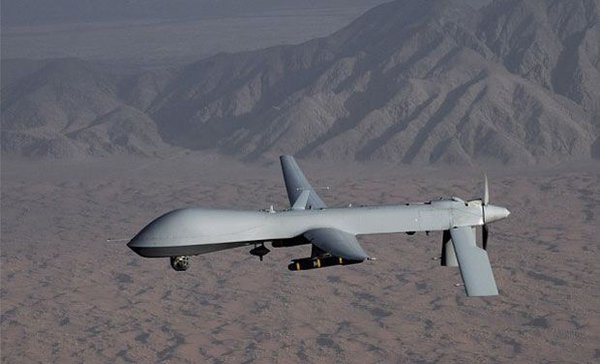 An influential Committee of Parliamentarians has today (Tuesday) called on the British Government to "urgently" clarify its legal position on drone strikes, warning that its policy: "may expose...Ministers to the risk of criminal prosecution for murder."

A new Report from the Joint Committee on Human Rights (JCHR) also states that the Defence Secretary, Michael Fallon in evidence given to the Committee, demonstrated a "misunderstanding of the legal frameworks that apply" to the use of armed drones outside of warzones.

The Report entitled: "The Government's policy on the use of drones for targeted killing", warns that the UK's own policy of targeted killing - announced as a "new departure" by the Prime Minister last year, may: "end up in the same place as the US policy", despite Ministers' claims to the contrary.

The US covert drone programme, undertaken by secretive agencies such as the CIA, has proved controversial as it is also carried out in countries where America is not at war.

The programme is estimated to have resulted in the deaths of hundreds of civilians, but is shrouded in secrecy to the point where the US Government has yet to acknowledge its existence officially. General Michael Flynn, the former head of the Defense Intelligence Agency under President Obama has described it as a "failed strategy."

Targeted strike in a country not at war with the UK

Last September, David Cameron announced that a "targeted strike" had been carried out in: "a country where we are not involved in a war" and admitted that this was "the first time in modern times" that this had happened.

The British Government has since sought to distance itself from any suggestion that it is following the US model of "targeted killing", however they have refused to answer repeated questions by MPs and the Committee as to whether, like the US, was maintaining its own 'Kill List' of individuals set for targeting.

The Committee says that it is "disappointed...by the Government's failure to answer a number of important questions", criticizing: "contradictions and inconsistencies in the Government's account of its policy, which have given rise to confusion."

Jennifer Gibson, a staff Attorney at the influential UK based international human rights NGO Reprieve who gave evidence to the Committee, said: "This report is a wake-up call. Not only does the committee raise troubling questions about whether the Government 'misunderstood' the legal frameworks that apply, but it warns they may be at risk of prosecution for murder as a result.

"The UK's silence in the face of repeated questioning by the Committee only further reinforces the very real danger that the UK is following the US down the slippery slope of kill lists and targeted killings. This is alarming, given the CIA's secret drone war has killed hundreds of civilians and been described as a 'failed strategy' by Obama's own former Head of Defence Intelligence."