One would think with all the learned geo/political scholars ensconced in the West that this expose would not be necessary. Such is not the case though. The West in all of its hubris is dumb as a rock when it comes to understanding Russia let alone relating to the peoples and its government. 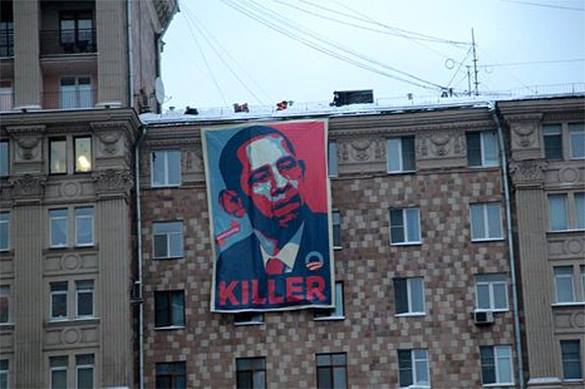 Case in point: the continued deteriorating relationship between America and Russia. Bully hegemonic America cannot seem to pull its head of out its tail end when broaching anything and everything involving Russia. Consider the latest negotiations between the two superpowers (Yes, there are TWO). America opted for 'secret' talks with their Russian counterparts in Davos, Switzerland of all places (across the chalet, the one percenter world's elite gathered for their annual feast of devouring the rest of us).

On their agenda: Ukraine, Syria, the emerging refugee crisis in Europe worldwide (supposedly) and to a lesser extent, ISIS.   In the photo‐op, Russian Foreign Minister Sergei Lavrov was seen greeting his U.S. counterpart, Secretary of State, John Kerry. Their embrace though cordial was warm. However, when the wicked witch Victoria Nuland breached his entrance, wisely, Sergei, did a quick two‐step side shuffle. Their eyes barely met.

The lenses clearly caught Lavrov's stern rebuff. Nuland's discomfiture was also palpable. Some of you remember cookie monster Nuland don't you? Sure you do. How could you forget? Her hands are blood stained. The Ukrainian victims' voices from both innocent citizen and combatant alike cry for justice from their early graves. Today, the murderous toll increases daily in the Donbass region. All because this saboteur felt no compunction about hatching the murderous Maidan  coup against the democratically elected government of Viktor Yanukovych almost three years ago. In its place, the Kiev fascist junta now acts as a willing and cooperative Washington vassal. No doubt about it.

The failed state of Ukraine is the primary reason why Lavrov and Kerry met. Why was Nuland there? Better ask the CIA. She is the de facto 'under boss'. Kerry is a messenger. The U.S. Congress is filled to the rafters with neocon chicken hawks. Now some of them are even running for president. Warmongers Clinton and Bush stand out. What many have in common is this: Russia is America's perceived enemy. The reason:  none of the neocons' thinking has progressed beyond the 1960's. The Cold War winds still frost their hearts. There are no signs of thaw in the current Administration's rapprochement either. In duplicitous Nuland, Washington's warmongers have their covert mouthpiece.  Nuland's presence in Davos was not to seek peace. No. Not at all. Her mission had a singular purpose: increase the pressure on Russia; do not offer let alone yield any concessions. Ostensibly, America will stoop to any depravity to achieve its over arching goal: dial‐in a weakened and submissive Russia for their nuclear gun sights.   Illogical as it seems the aforementioned is the pathetic state of America's 'diplomatic' approach toward Russia. Had America's 'think tanks' done their due diligence the scholars by now should have had an epiphany. Russia had just experienced a systemic failure of government. The Soviet bloc meltdown happened a mere quarter century ago. In their transition towards a market based economy, first with the 'Privatization Programs' and the subsequent theft of their natural resource base through the rise of the denizen  oligarchs, ordinary Russians have suffered on a scale unimaginable to many Western citizens.

Now President Vladimir Putin's strong leadership has given the Russian people revived hope. Under his guidance their collective plight has improved. The criminal oligarchs have fled. Those foolish enough to oppose law and order were soon jailed. Using prudent economic management techniques augmented by future conservation policies for Russia's vast Siberian based energy resources President Putin is building a new Russia. He is constructing one which the magnitude of the economic benefits can be felt by citizens as far afield as Vladivostok and not just Moscow or St. Petersburg.  To achieve this goal, President Putin has opened Russia's frontier to Western partners. All was well until the West imposed their illegal sanctions without cause or legitimacy under international law. Yet the West is still in denial. They see President Putin through a distorted prism.

He is not KGB. Putin had every right to question why Russia had to cede territory after the dissolution of the Soviet Union. His was a legitimate concern. Any sound leader would have done the same in similar circumstances. America has to accept reality.

Neither Russia nor President Putin has territorial expansion or world domination plans. To suggest that tack is poppycock. Because the opposite is true: America through its NATO vassals has encroached on Russia. IF Russia has to respond militarily it is from a defensive position. Any wall map will provide the preponderance of evidence in case one question's Russia's veracity.