Cologne, the European Union and the Migrant Crisis

500 cases of violence is a nice number to hit the headlines, each and every one of these cases totally unacceptable, yet as acceptable as any other case of violence or sexual harassment by non-Moslems against Moslems or other non-Moslems. The question is not one of religion, but rather development. 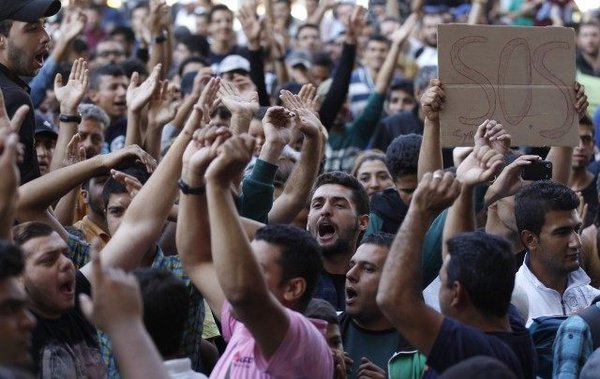 Development and management, to be more precise. And now let us remember some home truths. The entire Syrian crisis would have been solved by now by Syrians if regional and international powers had not interfered, fanning sectarian flames to the point where the country needed to turn to a stable and responsible international partner - Vladimir Putin's Russia - to help restore law and order and conduct an anti-terrorist operation, under the terms of international law as confirmed by the United Nations Security Council.

Many had no other option

Secondly, it is hardly surprising that many people caught up in the Syrian crisis had no option but to leave and try their luck in Europe or Russia, where tens of thousands of Syrian refugees have found hospitality, totally unmentioned in a Russophobic western media, as usual.

Thirdly, not all migrants are war refugees - among them are economic migrants wanting a better life and among both groups certainly terrorist elements and opportunists - common criminals from the dregs of their own societies who wish to inflict themselves on others, insulting the goodwill and hospitality of their well-meaning hosts.

The EU got it spectacularly wrong

Fourthly, as usual, the European Union got it spectacularly wrong in terms of management. Who in their right mind allows 1.1 million refugees to pour into a single country? Answer: Angela Merkel does. And how many of these were properly documented? When the first stories broke of lines of refugees armed with the latest generation cell phones, tablets, i-phones, smart phones, iPads and laptops but spectacularly, without any single item of documentation, the notion arose that trouble was brewing.

While it is easier to look back and make judgements with hindsight, it is obvious that providing support for the democratically elected Government of Syria, the authorities recognized by international law, would have been more beneficial than undermining it by supporting dubious groups on the fringes of Syrian society, then claiming that there are good terrorists and bad terrorists, before (silently) admitting that the entire Western approach to the Middle East has been an abject catastrophe from the border with Algeria to the Iranian frontier.

It is also obvious that approaching the refugee crisis using the proper channels of human management, setting up camps in loco and managing the asylum application processes from there would have been far wiser than what we see today - millions of people trekking across the Balkans, some dying in the sea before they reach land, others hungry and cold, fences being erected and a resurgence of European nationalisms and xenophobia, fueling the hidden crypto-Fascist members of European societies and their horrific agendas.

So the end result is barriers, wire fences, hatred, confusion, misery, panic, and now crime and sexual abuse - and let us not forget the victims of these last days were by and large women and girls who were going about their business in public and who expected and deserved to do so in safety without being harassed, groped, raped or assaulted. One hopes that those identified will be summarily sent back, after a due legal process has been followed.