Once they're in, it is hard to get them out

Nobel Peace Prize winner Barack Obama has reneged on his promise to withdraw US troops from Afghanistan. By no means is this the first promise he has broken and it must be feared it will not be the last, given the man's track record. 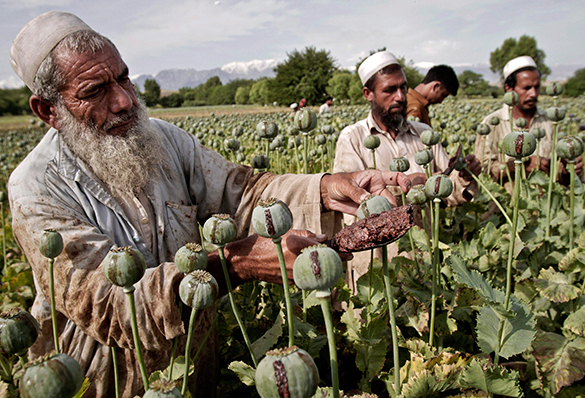 The reason why US troops are remaining in Afghanistan is a simple one: the US has not spent billions of dollars on the conquest and colonization of the country to just close shop over there and say goodbye. In the first place, Afghanistan has a unique strategic position in Central Asia that, according to prevalent geopolitical thought in Washington, just needs to be occupied. Secondly, Afghanistan is extremely rich in all sorts of minerals that the US will need, and that cannot be allowed to fall-God forbid-in the hands of the Chinese, the Indians, or even the Russians. Thirdly, under US protection and under the auspices of the CIA, Afghanistan produces more than 90% of the world's heroin, that is shipped to Europe and Russia in order to destabilize the populations there. The proceeds from the sale of heroin are desperately needed by the CIA to fund its worldwide covert operations. And lastly, the US still has not managed to domesticate the Afghans in such a way that they can be trusted to produce the required puppets for governing the country on their own. Karzai is quite a handful, despite all the leashes around his neck, and a suitable successor has not yet been identified. Indeed, Afghanistan has not proven as easy to tame as Cuba in the early 1900s or Nicaragua in the 1920s. Even so, I suspect US troops will never completely leave Afghanistan, if it is up to Washington.

Just look at some of the other places where US troops will not leave. Germany, for instance. After the conquest by the US in 1945 (why use the politically correct term "liberation"), US troops are still stationed there. The military occupation of Germany has now lasted for 70 years. A peace treaty has never been signed and the German government has to do whatever the US dictates. That is why every time there is a new Chancellor, he has to travel to Washington to swear his oath of allegiance to the US president. German subservience to the US may also explain why the government is passively accepting an invasion by at least a million and a half "refugees". And who knows how much bigger this fifth column of subverters of what remains of the German welfare state will turn out to be next year. Obviously, no politician in his right mind would ever tolerate such an onslaught on the very core of the German society and economy. That the German state, its society and economy will be seriously undermined by the waves of hostile "refugees" is a certainty. It uniquely serves US interests, because what the US want is a totally subservient Germany, that will dutifully by the inferior products turned out by US multinational corporations. It would seem these are now engaged in a general offensive against German industry, to eliminate possible rivals before the neocolonial TTIP is rammed through. The recent "scandal" involving Germany's biggest automaker Volkswagen has clearly been engineered to discredit that company. Who would believe that only Volkswagen would manipulate the data from its cars' exhausts? The neoliberal capitalist system that the US has been exporting is supremely conducive to the kind of attitude Volkswagen is now being chastized for.

Like Germany, Japan has been occupied by the US for 70 years. Like Germany, it is not an independent country. Like Germany, it is compelled to toe the line dictated by Washington. Then there are a number of smaller states where the US has stationed its military on a permanent basis. Kosovo, for instance, where Camp Bondsteel is among the biggest US military installations in the world. Then you have Greece, Spain, Italy, the Philippines, and dozens more. Interestingly, whoever wants to remove US bases from his country is immediately branded an "anti-American," an enemy of peace (indeed, of the Pax americana) and paranoid. Such hysterical reactions are on the hand not unusual among US people, even among those who can be considered educated, but on the other hand, they demonstrate how vitally important all those foreign military bases are to the US.

Few are the countries that have kicked out the US. In 1958, Fidel Castro and his men put an end to the US presence on their island (except Guantánamo Bay). From 1902 when Cuba had become "independent" until 1958, Cuba had been run like Afghanistan is being run today. Every Cuban who wished to run for office in his own country, or was hoping for a high-ranking government position, had to be approved by the US embassy. Whoever was not invited at the 4th of July Embassy reception, could abandon all hopes of making it in politics. US authorities fully supported local operations of the Mafia and US corporations, that could thus make fortunes over the backs of the mass of the Cuban population. Against this historical background it is more than understandable that Cubans today still take a dim view of their US neighbors.

Vietnam also kicked out the US, actually defeating it in a protracted war that cost the lives of 50.000 US soldiers. But the US killed millions of Vietnamese and so thoroughly poisoned the Vietnamese environment (courtesy of Monsanto, DuPont and the like) that still today an inordinate percentage of children are born with nasty birth defects. There will be no end to the poisoning of the Vietnamese people, since before long US big pharma will get preferential access to the Vietnamese market: Vietnam is signatory to the TTP agreement, although mainly because it trusts its neighbor China even less than the US. (Getting the better of China being TTP's main objective).

Getting rid of US occupation for good is quite difficult and if a nation succeeds in doing so, its leaders need to fear bloody revenge.

In 1969, Muammar Gadaffi overthrew Idris, the corrupt king of Libya, who was a US puppet. Immediately, Gaddafi closed Wheelus Airbase, the most important US base in North Africa and the Middle East. The US never forgave Gadaffi and did not rest until they could take revenge. I suspect the main reason the US nurtures such hatred towards the Iranian government is that it successfully kicked out the US in 1979.

The best service a government can do for its people is to keep the US out in the first place. Never admit their NGO's and multinational corporations, never to give them any trade benefits, nor to grant them the right to build a military base, nor ever sign a treaty with them. Keep the US at bay at all costs.

Unfortunately, only the biggest, proudest, bravest and strongest nations can afford to do so: Russia, China, for instance. And plucky little North Korea. But the Indians and Brazilians already have gone to far in their dealings with the US.

How the US initiated the 1979 war in Afghanistan

USA in Afghanistan: To lose without losing face

Afghanistan: The graveyard of imperial ambition

Author`s name Hans Vogel
14:14
Kyiv's largest thermal power plant damaged in Russia's rocket attack
19:39
Putin pays visit to Crimean Bridge two months after explosion
18:32
Russia strikes Ukraine's infrastructure facilities for 8th time
16:11
Retired US intelligence officer: Russia will win in Ukraine in summer of 2023
15:56
British mercenary: Winter cold in Ukraine came as a shock to us
15:31
Moscow responds to EU's decision to cap prices on Russian oil
14:52
As many as 2,500 dead seals found on the coast of Caspian Sea in Dagestan
14:11
Three household gas explosions occur in different parts of Russia in one day
23:35
Putin keeps his promise and presents impressive gift to China
16:30
Armed Forces of Ukraine strike transformer substation in Zaporozhye
UK and USA could be part of drone attacks on Russian military airfields