Ukraine: Getting to the truth. False Flag attack planned?

The Facebook page of a group which collects live reports from eye witnesses about the situation in Ukraine has been constantly taken down. Why? Because it contains abuse or violates one single rule of this social network? No, because it tells the truth and the truth hurts. And there is rumor of a Syria-style chemical false flag attack planned... 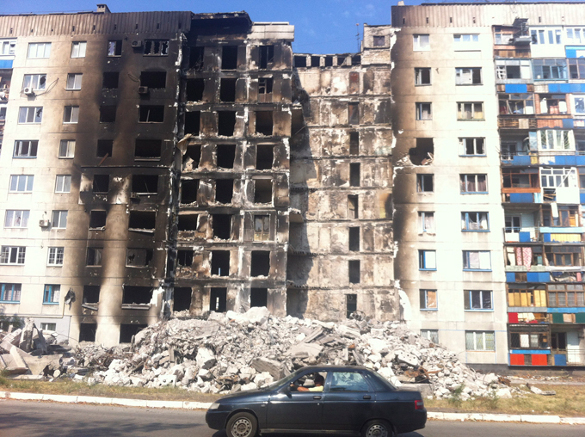 For those who have forgotten the Ukraine story, now that it has slipped into the background amid the Summer silly season, at the beginning of last year the democratically elected President, Viktor Yanukovich, was removed from office in an illegal coup d'état which did not fulfil a single precept of Ukrainian law. There ensued massacres of Russian-speaking civilians by Fascists in several places, where people were burned alive or strangled, knifed or kicked to death.

Attempts to deny this have been ridiculed by the pages of those engaged in telling the truth, who have now abandoned Facebook and taken to VK, an alternative social network which does less censoring and more sharing of facts. Needless to say, VK is Russian and Facebook is American.

So let us examine some of the stories that have been banned. One is from Alexandrovka settlement in Donetsk People's Republic which was shelled on August 27 by Ukrainian forces, where civilian homes were hit without the slightest provocation. War crimes by Kiev. Unreported in the western media.

One side destroys, the other supplies

While Kiev attacks the people it claims are Ukrainian citizens, and destroys homes and schools, murdering men, women, children and pets, Russian humanitarian convoys continue to pour in supplies for the oppressed people, bringing school textbooks and furniture for kindergartens. One side (Kiev) bombs them, the other (Russia) supplies them. Three tonnes of insulin have also been supplied by Russia.

For those western Governments supporting the illegal Fascist regime in Kiev, on August 27 a Monument to the Victims of Fascism in Zaporozhe Region was vandalized by Fascists, a number of whom went to the monument on the night of Thursday, put tires around it and set fire to it. The incident took place in Dorozhnaya Street in Konstantinovka and the perpetrators of this disgusting act of hooliganism are being tracked down.

In Donetsk, the water park Aquasferra is to be reopened so that the citizens can have fun with the attractions after activities perpetrated by Fascists meant the park had to be closed.

And now the most shocking news coming out of DPR. It is a rumor, and the sources have been kept undisclosed. The information comes from a "private source" i8n Slavyansk who warns, under anonymity, that a large-scale provocation is being planned, possibly a Syria-style false flag attack with chemicals against Ukrainian forces to blame the Donetsk People's Republic forces.

The information states that "cylinders of toxic gases and containers of poisonous substances were delivered to the technological facilities of high-voltage insulators plant in Kramatorsk street, town of Slavyansk".

"There's chlorine in cylinders, not less than five covered wagons, also other containers with contents I know nothing about labeled with words and signs "poison", "danger", "do not touch without protection." All of it was brought in under the guise of varnishes and paints, but I know the look of the packaging of both, and whatever was brought here last week has got nothing to do with it,  it looks like a chemical weapon.

"They don't let anyone in the warehouse , there is round-the-clock guard in military uniform without insignia, all the time there's been some strange hustle and bustle. Thus yesterday (Tuesday, August 25. ed.), the soldiers were drinking in "Caesar" cafe on the Slavkurort and whoever was sitting next to them told that the military boasted that 'separatists will be given a big washing, from which they will puke blood.' Our guerrillas have verified this information, there is understanding that the Ukrainian military and Security Service are preparing a provocation against the Novorossiya militias having intent to show them use chemical weapons against civilians.

"Harm as many civilians as possible, show dead bodies on TV for Europe and America to intervene. This is actually why I am calling from Slavyansk, we don't want to be Guinea pigs and die for Poroshenko or America. Tell everyone that Kiev is preparing a provocation with chemical weapons".

While this is a rumor, and while as an unnamed source it is not possible to corroborate the information, it has been confirmed by one independent source working in the trans-shipment of cargo from rail to road, who states that he also saw the cargo being attended by Ukrainian military and secret police.

"The 'right' people here know that soon there's gonna be a chemical attack from separatists, peaceful people will die. Those in the know, took their their families out of town, arranged business trips for themselves and disappeared, but there are those who can't go or are not aware of the situation. We need to stop this insanity as soon as possible", - said the source.

In conclusion, and once again, this is a rumor about a possible false flag attack. In this column I spoke of several such incidents in Syria before they happened. After what we have seen there, and in Ukraine, and given the recent history and activities of the FUKUS Axis (France-UK-US), would anyone be in the least surprised?

*Timothy Bancroft-Hinchey has worked as a correspondent, journalist, deputy editor, editor, chief editor, director, project manager, executive director, partner and owner of printed and online daily, weekly, monthly and yearly publications, TV stations and media groups printed, aired and distributed in Angola, Brazil, Cape Verde, East Timor, Guinea-Bissau, Portugal, Mozambique and São Tomé and Principe Isles; the Russian Foreign Ministry publication Dialog and the Cuban Foreign Ministry Official Publications. He has spent the last two decades in humanitarian projects, connecting communities, working to document and catalog disappearing languages, cultures, traditions, working to network with the LGBT communities helping to set up shelters for abused or frightened victims and as Media Partner with UN Women, working to foster the UN Women project to fight against gender violence and to strive for an end to sexism, racism and homophobia. He is also a Media Partner of Humane Society International, fighting for animal rights