The latest news that is leaking out in whiffs of dark smelly smoke is that, Obama as the most aggressive president of a rogue establishment has signed into a law that provides armed air cover for his pet terrorists surrounding Syria, who have caused deaths of over 220,000 Syrians. Most of these deaths have come about in a horrid manner, mostly by beheading. These demons incarnate have come from around 80+ countries to gather at this playground in the areas of Iraq and Syria to rape, pillage and murder by cold blood. Hence to begin with, to call this episode that is faced by Syrians as Civil War is a deliberate misnomer. 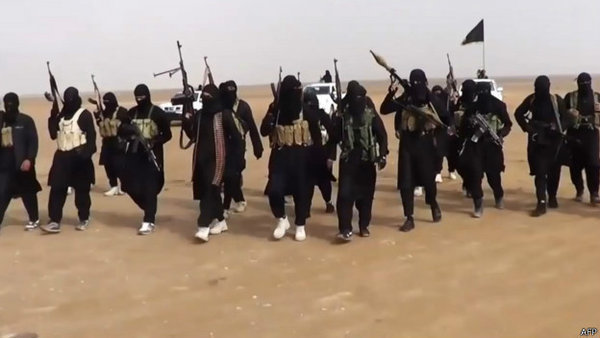 It is a proxy war that is being waged by some disgruntled Syrians and vastly helped by the primitive and cunning minded Saudi Wahabbis, despotic minded Qataris, Zionist Israelis, Muslim-Brotherhood dominated establishment of Turkey, the dominating and ruthless military super-power the US, the past masters who conquered and pillaged much of the world - the UK and France. I am not going to waste any of your time over this repeated information of who is waging and who is helping to wage this deadly proxy-war on a mostly hapless Syria.

BRICS versus the rest

Why hapless? Except for the neighbouring Iran and some moral support coming from Russia, China and other BRICS nations, Syria is surrounded by venomous villains as neighbours. Enough blood is being spilled so far and more is yet to come if this plan of the POTUS comes through. Hence this needs to be opposed urgently by all means and in all supportive forums. This is going to be another declared illegal war by the US on Syria.

Once this act by the Nobel Peace Prize winning imbecile begins, the next probable step by the POTUS will be to declare a No-Fly zone over entire Syria. Well of course knowing well that the Russians and Chinese would veto this at the UN, the US may declare a unilateral NFZ.

Hence at this stage it is extremely important that Russia supplies the dreaded S-300 series anti-aircraft missiles to Syria. President Assad is very vulnerable now. If he falls by the ugly machinations of the West, this nation which is the most progressive one in the region, will fall into an abyss just like Iraq and Libya have in the not too distant past.

This is what precisely what the Americans, the Brits and others want. That chaos be set in at a once peaceful, beautiful nation of Syria. Out of much bloodshed will emerge an organized chaos of a nation. This is what is being anticipated at the power corridors of the Beltway in DC and Tel Aviv. This is what they succeeded in bringing about both in Iraq and Libya. Syria is almost the final frontier for these cannibals at power at these few countries that truly form the Axis-Of-Evil.

Lies and deception took over the main airwaves during the crisis manufactured by the western powers in Libya and Iraq. There were hyper talks of WMDs in Iraq, of rape being used as a weapon by Muammar Gaddafi. And now the accusations have been that chemical weapons being used on Syrian civilians by the legally elected govt of Bashar Assad. These have made it to the headlines in all Zionist/corporate owned media. Not surprising many people have bought into these stories. It shows their mental capacity of many but that is another story anyway.

So what's the best way to counter this latest move by the frustrated American establishment? But to begin with why even use the word frustration, one may wonder! Well, the story is that ever since the inception and followed by the phenomenal growth of BRICS group of nations, it has become clear that the existent domination of the G-7 group is getting diminished by the hour almost. BRICS has overtaken the GDP of G-7 by the measurement of PPP and WILL do so by the actual numbers in the near future. The domination of the rest of the world by the US led West is at peril by the emergence of BRICS. A domination that has lasted for around 500 years by the Anglo-Saxons is coming to an end and hence is one of the major causes for frustration! A new East and South are emerging led by the BRICS, a set of five rapidly developing countries.

To add insult to the injury to the dominating west, other groups of nations are emerging in the once vulnerable regions. They are RIC, SCO, EEU and ALBA to name some. And, more important factor that may move the term frustration into desperation is that the only International Reserve Currency (IRC) the US Petro-Dollar is being replaced by local currencies and by Yuan for trading amongst the BRICS nations! This will portend the fall of Petro-$$ in the coming future. The establishment of BRICS Bank also known as NDB and the Chinese AIIB will soon compete and outdo the outmoded functionaries of both IMF and the World Bank. Both have proved to be blood-suckers of developing nations by dictating very damaging austerity measures that harms a society but help these Banksters! Hence NDB and AIIB will be looked as saviours of nations in the days to come. These two financial entities will contribute towards true growth of societies unlike IMF and World Bank.

Now with these developments outside what once was considered as impregnable fortress, built originally by the British Royals and guarded carefully by successive US establishments after the end of World War-2, brick by brick this edifice has lately been crumbling. And that certainly is being caused by the growth of BRICS. No pun intended here of course.

The above developments and financial facts have been well hidden from public view by the mainstream media owned by Zionist/Corporate entities that actually are the tools for various governments of the West. The fall of the West as we know is inevitable and is a matter of time. Oh yes, if one doesn't perceive this as a fact, just think. The western nations are heavily dependent on lines of credit as their sources of major income apart from selling war machinery. Whereas the emerging groups of nations mentioned above is where the actual growth is taking place, industrial and other. China is the factory to the world and that is very well known.

Well then with these facts there is no wonder that the frustration may turn into desperation for the US led West. Hence these acts of bravado each passing day by the western establishments. Demonizing of leaders and countries by western govts and their tool, the mainstream media began a while ago consisting of Iraq, Libya and now it is being passed onto Syria, Russia, China and other BRICS countries. But actual facts too are emerging thanks mainly to social and alternate medias and one doesn't have to read between the lines anymore to understand the duplicity and cunningness of failing countries led by the US.

But the immediate lurking danger is Obama's declaration of war on Syria. We shall have to forget the impending doom of financial structures of the West at this juncture. The big question is that will Russia open her arms and help arm Syria or perhaps the trump card which is Iran, send arms supplies including the S-300 or S-400 series missiles to counter the US air power?

If US provokes Syria into shooting down one of their military aircrafts, then there is a possibility of a larger war breaking out is all real. Iran and the despicable power of the Zionist entity at Tel Aviv will be drawn in. An Armageddon may take place. The US may feel that it will come out unscathed along with Israel. I bet that this is a wrong assumption. Another Waterloo, another Vietnam, another Stalingrad may await the aggressors. But lessons won't be learnt. They were never learnt anyway. Otherwise the US wouldn't be behaving in such despicable, sick manner. But again it is that greed to conquer, dominate, divide and rule is this country's motto. That will never die. Millions have and millions will die once again but the US and its demonic thirst for power to dominate will never be satisfied until, until the Dollar dies a natural death. And that will happen. And at an arena near you, very shortly.