Greece: Agreement... but at what price?

Sooner or later the people of the world will realize that We Are All Greeks - our collective destiny will be that of the Greek people, who days ago voted against austerity in a Referendum and now see another 85 billion Euro of social terrorism dumped upon them in the manic obsession to stay inside the Euro, which has torn the country's heart out. 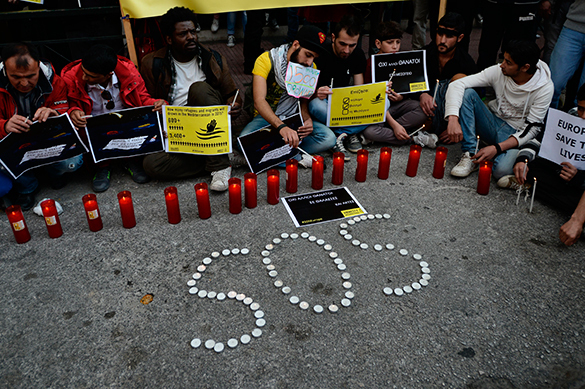 The European Union is as everyone knows far from democratic. In fact, as an institution it is not democratic at all. The people of Europe as a whole were never asked to sanction the Project, they were not asked whether they wanted the Euro or the European Union. The Eurocrats just pressed ahead regardless and the plight of the Greek people is an example of the result.

Is this the payback for fighting the Nazis?

Are the people of Greece responsible for the colossal speculative debt on their shoulders? No? Then why should the people have to foot the bill? Did the people of Greece recently vote against more austerity? Yes? Then why does the new bailout come with a massive tail attached? And how Greece-friendly are the creditors, when the Gross Domestic Product of Greece is 185.4 billion Euro and the country now owes a staggering 327.8 billion Euro? If Germany's debt after what it did in the Second World War was pardoned, then why isn't Greece's? Is this the payback for fighting Fascism so bravely?

The measures attached to the third bailout are a death-knell for what remained as the ruins of the Greek economy. If the country's income and well-being is based upon tourism, then what sense does it make to increase Value Added Tax, a strangulation tax, to 23% precisely on the venues which support tourism and whose livelihood is tourism? If the Greek people are hungry, and a growing number starving, then what sense does it make to slap a 13 per cent strangulation tax (VAT) on fresh food?

If the Greek people are relying more and more heavily on their agricultural sector and their farmers, then what sense does it make to raise the tax on farmers and agriculture from 13 to 26 per cent? As for abolishing the VAT discount of 30 per cent on the islands, how many of them can afford the knock-on effects of decisions taken on the EXCEL sheet? In practical terms, how fair is it to raise the retirement age to 67? Will the labor market support workers in a world of fast-moving technology, robotics and globalization, or will Greece face endemic unemployment not only among its youth who cannot enter the workforce but also among people aged over 45, who will be over two decades without work, having left the work market and being unable to re-enter?

It is a system which has imposed, or is in the process of imposing, the Generation of 500 Euro on Europe, a continent in which the top ten per cent will earn reasonable salaries and enjoy comfortable standards of living and the bottom ninety per cent will try to survive on miserable salaries with rising prices, unable to make ends meet and unable to leave the bubble which has been created around them.

Today the people of Greece have felt the force of an alternative form of coup d'état, but one coming from abroad, from a liberal political and financial system controlled by lobbies which is determined to punish SYRIZA for being leftist and the Greek people for voting to the left of PASOK. In reality, today the old Socialist Parties are in fact not Leftist but an alternative rightist option to Social Democracy once the people have become tired of a particular political clique and the corruption and nepotism which inevitably appears these days, by and large, five years after a party has been elected.

Today the people of Greece have seen SYRIZA move from referendum to Stockholm Syndrome, joining precisely the forces it was fighting, signing a deal alongside the International Monetary Fund, the European Central Bank, the European Union and the monopolistic groups and lobbies which control their policies.

Is it fair that NATO countries spend one point two thousand billion USD a year, each and every year, without asking their citizens if they agree, while the people of Greece are saddled with a rising debt they will never be able to pay back? If a growing volcano twice the size of your house suddenly appears beside it, how can you possibly coexist with it?