Beyond the war on terror 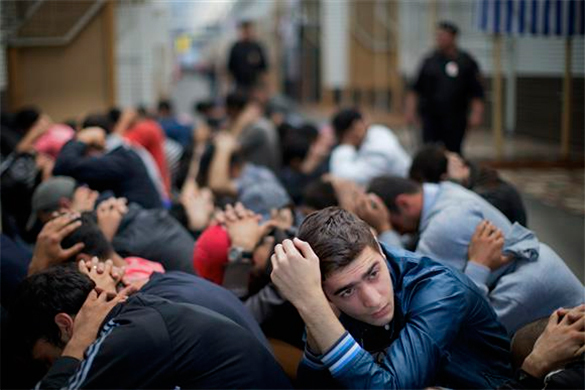 He quoted James Madison: 'No nation [can] preserve its freedom in the midst of continual warfare.'  He claimed that 'Beyond Afghanistan, we must define our effort not as a boundless "global war on terror," but rather as a series of persistent, targeted efforts to dismantle specific networks of violent extremists that threaten America.'

But Western military operations worldwide continued. In 2013 the US conducted operations in Libya and Somalia and assisted the French in Mali.  Since then it has intervened in Uganda and extensively in Syria, Iraq and Yemen. Readers in Russia will be particularly aware of Western military interference in areas such as Ukraine and the Black Sea. The US has beefed up its weaponry around the world. It has freshly deployed hundreds of troops overseas.

In the United States, the Patriot Act has continued to allow the government to spy on its citizens. Elsewhere in the Western world, surveillance has reached new heights.

But now there is evidence that the West is starting to pursue a new, more sinister 'boundless global war' against a broader enemy.

The new 'War on Ideas'

The new global War on Ideas is the brainchild of academics such as Alex Schmidt of the International Centre for Counter-Terrorism in The Hague. He believes that 'In terms of counter-terrorism policies, preventing violent extremism is not enough; rather all extremism - Islamist and other - ought to be prevented, given the bloody track record of extremism in power in the twentieth century and beyond.'

Such thinking found a welcome reception in Britain's ruling Conservative Party. In a menacing press release of 13 May 2015, Prime Minister David Cameron announced: 'For too long, we have been a passively tolerant society, saying to our citizens: as long as you obey the law, we will leave you alone . . . This government will conclusively turn the page on this failed approach.'

His government has now announced a number of measures, first discussed at the 2014 Conservative Party Conference, aimed at targeting 'extremists' who are not violent and who have broken no laws.

'Banning orders' will make it easier for the British Home Secretary to ban groups that she considers 'extremist'. 'Extremism disruption orders' will enable the police to prevent people from posting 'extremist' comments on the Internet - even where that behaviour breaks no laws. People 'banned' in this way will have to get permission before they can participate in protests or post certain material to the Internet. 'Closure orders' will enable the authorities to close premises used to 'support extremism'. The broadcasting regulator, Ofcom, will vet broadcast programmes to prevent 'extremist' content. Employers will be able to check whether potential employees are 'extremists' and bar them from working with children.

Measures are already in place to ban 'extremists' from speaking at universities.

Schools in Britain must take steps to prevent the 'radicalization' of pupils and 'protect' pupils from 'extremism'. This has already led to frightening levels of surveillance of children. Special software has been provided to schools to enable them to catch extremism in their pupils by alerting staff if a pupils uses a phrase used by 'extremists' or visits an 'extremist' web site on school computing equipment. Children younger than 10 are being told to fill in special counter-extremism questionnaires at school.

An Extremism Analysis Unit has been established to support these measures.

The British government's definition of 'extremism', as outlined by the Home Secretary, Theresa May, is: 'the vocal or active opposition to fundamental British values, including democracy, the rule of law, individual liberty and the mutual respect and tolerance of different faiths and beliefs.' Such a vague definition will permit the government to silence anyone who argues for radical change or who campaigns to change the country's political system.

It is easy to find yourself classified as an 'extremist' in Britain. For example, Mak Chishty, a senior officer with the Metropolitan Police, has suggested that anyone who suddenly stops shopping at Marks & Spencer (a major British store) should be considered a potential 'extremist' (he thinks that 'extremists' regard Marks & Spencer as 'Jewish owned'). Christians have expressed fears that they could be considered 'extremist' if they criticize 'gay marriage'. Atheists have voiced concern that they could be targeted if they criticize Christians or Muslims too strongly. Clearly, the fear of being targeted will have a chilling effect on debate. Even where the police do not become involved, there will be self-censorship.

In Germany, in January 2015, Angela Merkel proclaimed 'Hatred, racism and extremism have no place in this country.' In the same month, the German government approved a plan to withdraw ID cards from individuals whom it considers to be 'extremist', replacing them with cards that state that the holder may not leave Germany. The German authorities are still pursuing their second attempt to ban the Nationaldemokratische Partei Deutschlands (NPD). Spreading nazism and xenophobia are illegal in Germany; the problem is that the NPD has not been proven to do either. In fact it has several seats in the state of Mecklenberg West Pomerania and one in the European Parliament.

In Ukraine it was the Communist Party that faced criminal prosecutions - for supporting the breakaway of Crimea from Ukraine and the independence movement in eastern Ukraine. It was eventually banned. Ukraine subsequently banned groups from openly supporting communism or nazism or displaying their symbols. Groups that the authorities claim support either can be closed down and information about their supporters can be made public. Singing the Internationale can lead to a 10-year prison sentence.

In April 2015, French premier Hollande announced a €4 billion increase in defence spending over a four year period to combat the 'threat' from 'extremism'. A further €250 million had earlier been announced on a variety of projects to instil 'republican' values in schoolchildren. A special web site has been set up to encourage French citizens to report anyone they suspect of being 'extremist' - possible grounds for suspicion including, among others, sudden changes in eating habits, stopping watching television, or spending a lot of time on the Internet.  In May, the French parliament approved a Bill that will enable the authorities to spy on citizens to a greater extent than ever before, bugging rooms, reading emails and listening to telephone conversations.

Western governments have been making it difficult for radicals of all kinds to advance politically for decades. Their two principal weapons, traditionally, have been a stranglehold on the media and electoral systems that favour pro-establishment political parties. More recently, countries have restricted freedom of speech by outlawing the expression of 'offensive' views or the questioning of the authorities' versions of modern historical events. Dirty tricks by the security services are also well documented.

But now governments are openly stating that they will not allow non-violent 'extremism' and they are defining 'extremism' in vague and dangerous ways. They are using the threat of police and prisons to combat ideas. They openly threaten to target people who have broken no law with measures that restrict not only their ability to promote their political agenda but also their freedom to impart and receive information without interference from government authority. Some of these measures - allowing employers to check if applicants are 'extremists' in Britain and withdrawal of ID cards in Germany - will affect people's ability to earn a living. Children are now being targeted openly for surveillance in their schools in several countries - so parents might now be afraid to discuss politics in front of their children in case their words are repeated to teachers.

In short, Western governments are now doing the sort of things that they used to criticize the Nazi and the Soviet regimes for doing.

Hypocrisy of the West

There is something deeply hypocritical about the West's campaign against 'extremism'. After all, many of the actions of Western governments in recent years have hardly been 'moderate'.

How 'moderate' was the decision to invade Iraq - a decision that has probably done more than anything else to encourage violent Islamism to spread throughout the world?

How 'moderate' was the decision to murder Libya's Mohammar Gaddafi, ousting a stable regime that provided its citizens with excellent social benefits, replacing it with chaos and bloodshed and allowing Islamic terrorism to spread yet further?

The US government alone has, according to William Blum, attempted to assassinate more than 50 world leaders over the years.

It has attempted, sometimes successfully, to overthrow governments in at least 19 countries - probably far more. Is the West's support for the coup in Ukraine an example of 'moderation'?

These Western politicians are the ideological children of the men who dropped nuclear bombs on large Japanese cities - not 'to end the Second World War' but, as Alperovitz and others have shown, simply to show Stalin that they could do it.

Western governments are some of the most violent extremists on earth.

The 'War on Terror' targeted violent criminals. They posed a genuine security threat to the West and ordinary citizens and some kind of response seemed understandable, even if we might criticize the details.

The new 'War on Ideas', however, targets people who want to change the world, even by peaceful means.

But doesn't the world need to be changed by peaceful, lawful, nonviolent means?

Don't we need people  who engage in 'the vocal or active opposition to fundamental British values' without resorting to violence? Especially when those 'British values' seem to include spreading murder and mayhem worldwide . . .

Some 3500 people die of hunger worldwide every day. According to UNICEF, nearly half of all deaths in children under 5 worldwide (3 million a year) are attributable to malnutrition. The World Food Programme tells us that 13.5% of people in underdeveloped countries are malnourished. Meanwhile, the Watson Institute estimated the cost of the American war in Iraq at US$ 4 trillion. There's more than enough food for everyone - but the money to pay for it is badly distributed. The moderates who rule us have not built a very fair world. Isn't there a place for non-violent radicals in the campaign to build a better one?

The Western media reacts with revulsion whenever someone is killed by a group such as Islamic State. Those who are killed by American bombs - and there have been far more of them - elicit no such outrage. Don't we need non-violent radicals to expose such hypocrisy?The Western press often complains of the security threat posed by large immigrant populations in European cities. Ironically, had European governments listened to nationalist 'radicals' who warned about the possible consequences of large-scale immigration - instead of demonizing them as 'neo-nazi extremists' - such immigrant populations would not now exist in their midst.

Radical viewpoints of different kinds can contain valuable insights and offer real, albeit politically difficult, solutions to problems. Those voices may soon have to fall silent throughout Europe.