Why the West prefers Hitler to Putin 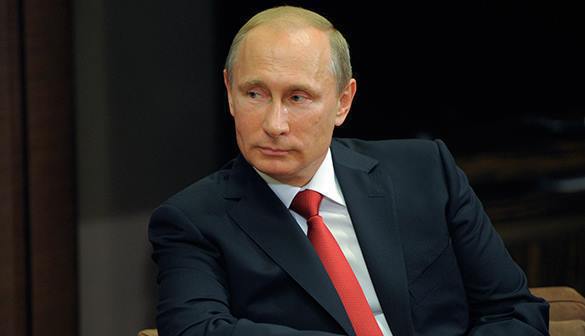 According to the Koran, it was on a Tuesday that Allah created darkness.

We perfectly understand that Vladimir Putin does not need any counsel from anyone. As John Mearsheimer asserted, he is a world-class strategist and maybe the greater politician of the twenty-first century, being the main attraction and the great enemy of western chaotic camarilla...

Yet it is important to remind the actual foolishness of the West, given that the hostile elite who rule Europe and United States have gone completely insane. The global elite have helped the Islamic terror anywhere in the world, in Russia, in China, in Middle East, in Libya, in Iraq, in Syria. We have hundred of evidences now. The terrorist networks are controlled, designed, financed and armed by western agencies. So were the leftist or rightist terrorists during the Gladio Era in Europe (see for instance Danielle Ganser and her book on Gladio). The French Government has become completely submitted to the petro-monarchies of the Gulf and Islamism is reinforced anywhere in Europe, threatening what is left of our liberties.

And having done that mess in the Mediterranean area, the West is going now to threaten and maybe wage a suicidal war against Russia. Many politicians form Baltic countries who want that war with Russia are merely Americans: see the biographies of Baltic politicians.

Vaira Vīķe-Freiberga, Dalia Grybauskaitė, the mad dog Thomas Hendricks Ilves: all were born and/or educated in America, not in Europe. And the hostile elite in Europe, made of itinerant scholars and wrecked politicians, is nowadays more Anglo-American than European, except in Germany.

But as we know, this country has still something to settle with Russia. Now even Emmanuel Todd believes in France in what I called the American-German lebensraum.

The West (the Nazis too called themselves the West during the war) implicitly recognizes the foundations and reasons of Nazism, when Hitler decided to invade and destroy Russia. Today the victory of May 45 is no more a feast in the west. The West had decided it preferred western fascism to Soviet Union, or to put more bluntly, Hitler to Putin.

This is the world we live in.  Western democracies hit by Leo Strauss and his neocons, by post-modernity and chaotic values, by incoherence and stupidity, prefer the rascals of the Jihad to the honest Muslims and neo-Nazism to a democratic Russia. As we say in France the extremes get closer, and the hyper-tolerance of the decadent West had to come to this barbarity, to this meta-political oxymoron.

Nazism is good because it is against Russia. Terrorism is good it is because against Islam. Mujahidin are good because they are against Soviet Union. Ask Brzezinski. Ask the nutty professor.

Three years ago, I began writing for Pravda.ru, mainly because the aggression on Libya seemed to me rich of gloomy and gruesome consequences. Western brutality became unpredictable and sudden, ruthless and cruel, tyrannical and disastrous. Yet the elite, reporters, military, tycoons, deputies, all accepted the attack which resulted on thousand of dead and the destabilization of Northern Africa, with massacres, poverty and now a new unbearable transfer of population from Black Africa.

Then we came to Syria. Assad was labelled a Nazi, the orthodox Christians were too massacred with the local Muslims, and the civil war encouraged by western insanity. Putin then tried to interfere, but it is like in the movies: don't try to interfere with a terrorist...

I quote this splendid passage:

It is nicely apt that the word terrorist (according to the OED) should have been coined during the French Revolution to describe "an adherent or supporter of the Jacobins, who advocated and practiced methods of partisan repression and bloodshed in the propagation of the principles of democracy and equality."

Although our rulers have revived the word to describe violent enemies of the United States, most of today's actual terrorists can be found within our own governments, federal, state, municipal. The Bureau of Alcohol, Tobacco, and Firearms (known as ATF), the Drug Enforcement Agency, FBI, IRS, etc., are so many Jacobins at war against the lives, freedom, and property of our citizens.

We can establish then that a terrorist is any western politician who votes laws against his fellow citizens, approves the wars against Afghanistan or Libya and does not go to Moscow to celebrate the victory on Nazism.

That means a lot of people.

We complain of terrorism, yet our empire is now the greatest terrorist of all. We bomb, invade, subvert other states. Although We the People of the United States are the sole source of legitimate authority in this land, we are no longer represented in Congress Assembled.

He added to that the worst conspiracy theorists were not on the web but at the power. Who believes that a handful of cavemen from Afghanistan and inexperienced pilots could slam four planes simultaneously on the towers, while there was no visible plane above the Pentagon and while another building, the famous WC7, was crumbling alone? Who are we to believe such media crap?

This is why I let ineffable and unmovable Angela Merkel conclude:

Vladimir Putin lives in another world.

Author`s name Nicolas Bonnal
*
18:54
Ukrainian soldier uses chainsaw and fire to release US howitzer from ice trap
18:30
Onet: Ukraine will lose in six months due to shell shortage
17:36
Russian troops defeat Ukrainian troops in Zaporizhzhia region
14:50
Number of foreign mercenaries in Ukraine continues growing
14:17
Russians buy more than 50 tons of gold in 2022
13:57
Russia will not talk to Ukraine. Russia will talk to the West
13:34
USA's plan to give 20 percent of Ukraine for peace hoax
12:51
Medvedev: Ukraine as a state to be devastated, go bankrupt and be turned into colony
19:57
Russia will use all of its military potential to counter Western arms supplies to Kyiv
18:34
Biden changing strategy on Ukraine to reach diplomatic solution with Russia
The West prepares army to invade Russia