For great swathes of the UK, Prime Minister Cameron is seen as an arrogant, out of touch, over-privileged, aristocrat who hates the poor, disadvantaged, elderly, disabled, affordable social housing, those unable to find work in a shrinking job market and just about anyone not from his money-mired hunting and country mansion pals. In a family tree festooned with titles he is also a lineal descendent of King William IV. 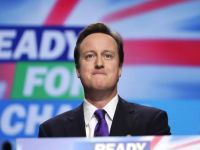 His government's swinging welfare cuts have led to suicides and many other financially related deaths, such as diabetic ex-soldier, David Clapson, who died with just £3.44 in the bank, six tea bags, a tin of soup and tin of out of date sardines in his cupboard. His benefits had been stopped. He died from diabetic ketoacidosis caused by not taking his insulin. His sister felt he may have stopped injecting himself in despair over his lack of cash and work. (Daily Mirror, 20th April 2015.)

Labour Party Leader, Ed Miliband's popularity is faring little better, especially since Tony Blair pitched up, all teeth and perma-tan, to "support him 100%", also donating £100,000+ in £1,000+ bundles to one hundred Labour parliamentary candidates. Endorsement by Blair after Iraq is the kiss of electoral death.

Cameron and Miliband are running about neck and neck in the unpopularity stakes, with Cameron saying that should Miliband scrape in to form a "minority government" it would have no standing. Chutzpah of some dimension. Cameron, of course, leads a minority party, which is why he had to form a coalition with the Liberal Democrats.

David Cameron also tied his own hands when it came to calling an election at a time when government popularity might have been marginally higher. since he changed the parliamentary cycle to a fixed five year term (he assumed office on 11th May 2010.)

However will he benefit from an unexpected coincidence, the birth five days before the 7th May elections of a second child to the heir to the throne, Prince William and his wife?

In context, in 2013 David Cameron faced scathing criticism including UK poverty and social exclusion rising by 1,689,000; those earning below the minimum living wage at 6,422,000; food banks reaching 707, with 500,000 relying on just one chain; child poverty rising by 13% and 800,000 more households living in fuel poverty, with a further woeful list: "Cost of Cameron's Hundred Worst Failures" of the social slash and burn of his government's policies to shame.

But then a baby was born, Prince George, Prince William's first child and third in line to the throne.

As Matthew D'Ancona wrote at the time: "What Cameron will want - subtly but unmistakably - is to annex some of the mood of celebration and associate himself and his government with the outpouring of emotion. Royal fertility is one of the ancestral forces that binds a nation together and mediates its dreams. It is both magical and down-to-earth; swathed in majesty, yet grounded in flesh and blood. Every politician wants a piece of that." (Evening Standard, 24th July 2013.)

David Cameron, it seems was also early on to the possibilities of hitching his wagon to the feel good factor of the second birth at the time of the election and amongst the first to congratulate the royal couple last September when the pregnancy was announced.

On the announcement of her admission to hospital for the birth on 2nd May, he tweeted: "My best wishes to the Duchess of Cambridge, who is having her second child today. The whole country will wish her well." The Daily Mirror recorded that Twitter users speedily noted that, as one wrote: "nicely managed to avoid saying labour ..."

Another cynic wrote: "You've had that Tweet saved in your drafts folder for days, haven't you ... ready to deploy at a seconds notice."

Of the birth he tweeted congratulations and "delight" and fawned: "One of the privileges of my job, is you get to see them up front and they are a wonderful couple and loving parents."

The Obamas in their message also congratulated "all the people of the United Kingdom" though quite what they had to do with the creation and arrival is hard to fathom.

In a throwback to empire, the 8lb., mite was greeted with royal gun salutes in London's Hyde Park and at the Tower of London. There are royal baby stamp collections, royal baby coins struck by the Royal Mint.

Legoland in Windsor, near one of the Queens palaces announced: " ... at the Legoland Windsor resort we have welcomed the new royal baby in miniature into our lego royal family in our world famous Miniland attraction." Bookmakers have paid out over a £ million to those who guessed the baby's name correctly (Charlotte Elizabeth Diana) and Pizza Hut gave free "royal" pizzas to customers named Charlotte.

But whilst former New York City Mayor Michael Bloomberg and former Obama Small Business Advisor, Karen Mills have enthusiastically supported David Cameron, will he, with less than 24 hours to go, as he sweats around the country, jacketless, tieless, sleeves rolled up, trying to look how he thinks "ordinary" people look, manage: " to annex some of the mood of celebration and associate himself and his government with the outpouring of emotion"?

We will have to wait and see. His Senior Advisor is Jim Messina, former campaign manager of Barack Obama's 2012 re-election bid, known as "the fixer", a stated Cameron admirer, he has a reputation for pulling advantageous political stunts. However what works in the US often does not travel well across the Atlantic.

Cameron's chief election strategist is Australian Lynton Crosby, a political strategist dubbed " the master of the dark arts" and the "Australian Karl Rove." He ran the Conservative election failure in 2005. That he is a lobbyist for the tobacco industry introduces another contradiction for Cameron who has finally made some weak efforts to discourage smoking.

Further: "a cross-party committee of MPs accused the government of "utterly unacceptable" behaviour over the preparation of a new bill on lobbyists, Labour warned of a "lobbying scandal" in Downing Street after the Chancellor of the Exchequer, George Osborne unveiled tax breaks for the fracking industry, championed by Crosby."

Crosby's company, Crosby Textor: " represents the Australian Petroleum Exploration Association. One of its members, Dart Energy, has a UK subsidiary, Dart Europe Limited, which has an interest in the Bowland Shale site in Lancashire and Yorkshire ..." There is deep hostility to fracking in the UK.

In a further blow to Cameron-Crosby credibility the Independent  obtained a document, produced in 2010 by Crosby's lobbying firm, which proposes targeting key UK Government figures, including David Cameron, to enhance the "size, acceptability and profitability of the private healthcare market." If there is one service of which the British are militantly proud and protective, it is their National Health Service.

So Miliband has the Blair millstone round his neck, and Cameron who wanted to be "heir to Blair", and regards him as his "mentor" has the Messina-Crosby duo. Whatever they come up with overnight it seems it will take more than a royal baby to persuade a cynical public to resoundingly embrace either of them.