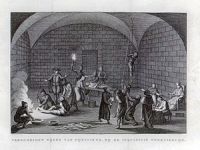 Western civilization - the story has it that they are do-gooders trying to free the oppressed, trying to sow the seeds of democratic principles so that societies can enjoy the fruits of market-based capitalism in a (violins) globalized world of globalized values and precepts (crescendo) where freedom and democracy are the fundamental principles (drum beat) that underpin Humankind thriving today where tyranny stalked before (raspberry).

Let us examine this wonderful western civilization. For a start, western society is based upon the foundations of extreme violence, cruelty and the very worst tyrannical regimes, western wealth is based upon plunder of resources from Africa, Latin America and Asia, as holier-than-thou western governments were practicing slavery, destroying families and societies and civilizations, forcing men, women and children to cross the oceans chained together sitting in a sea of excrement, to be beaten and abused and insulted and humiliated for the rest of their lives.

In three words, western civilization is underpinned by theft, cruelty and murder. True, Tomás de Torquemada, the Great Inquisitor, no longer lives. Or does he? In fact if we scratch beneath the surface, we find dozens of counts of cruelty and injustice, perpetrated by western leaders in power today, which would have made the Inquisition look like fairy godmothers.

Some examples are the support for terrorists who sliced the breasts off women in the streets of Libya, who sodomized boys, who impaled little girls on stakes, who practiced and practice torture, rape and murder. Further examples are provided by false flag chemical attacks in Syria in a desperate attempt to incriminate President Assad and seize the Russian naval base in the Mediterranean, others provided by the staged coup d'état in Ukraine where the democratically elected President was ousted in an armed uprising and a new regime installed by flouting every law in the Constitution. Some democracy.

Democracy - where suffrage rules, where the people choose their government in the ballot box and where the grass roots of the political parties choose their representatives. Bullshit! The selection process is carried out in some cases based upon the television image of the party leader, then lists are drawn up behind the people's backs so in fact they have no idea who is going to represent them in Parliament/Congress. In other cases, the selection is based upon an interview, running along the following lines: "What will you do to help our village? Will you fight to keep the supermarkets off our High Street?" Answer: "Of course as your elected representative I will fight tooth and nail (cough) for this village". Translation: In fact (s)he has her/his tail very firmly closed in the door because (s)he is financed by a large supermarket chain and the lobby which has placed her/him at the interview is counting on her/him to back-track, do a U-Turn and do exactly what (s)he promised (s)he would not. Then before the next election (s)he will promise to try to reverse policies which were implemented above her/his head, claiming to have been the victim, shedding a crocodile tear in the Village Hall, while standing up and shouting on a soap box and grabbing the nearest kid when the camera shows up, with a stupid grin on her/his face. They fall for it every time. Yes the supermarket took away all our shops and destroyed our village but didn't he look good when he stood up on that soap box?

The way it works is like this. Once a party has been placed in Government, the lobbies which some of their representatives represent close ranks around the other representatives to the extent that policy is formulated not by the will of the people expressed in the election manifesto but rather the corporate interests of the BARFS lobbies (BAnking, eneRgy Finance, Food, PHarmaceuticals, weaponS). Decision makers are chosen not from an open job application process but rather, in a closed process with a foregone conclusion: the job specification is drawn up from the eventual winner's curriculum vitae, so that only (s)he fits the bill.

As regards freedom, how many people out there are currently baffled at why certain social networks (no names needed) are deleting posts and accounts that tell the truth about Ukraine, Syria and Libya? What we are seeing today is a clampdown on social media outlets, in a cynical manipulation of information so that the corporate media have no real competition. During the Libyan Civil War, my own Facebook account was taken over by one [email protected] who changed the password so that I could not enter my account and I lost around one thousand contacts. Nothing was done to protect me, so much for security and so much for respect for users.

Since then I have learnt to write all my contacts down using pencil and paper. And why did this happen? Because I was collecting information from Libyans about what was really happening, and I drew up my indictment against NATO* based upon this. The FUKUS Axis (France, UK, US) and the ASS, Anglo-Saxon Syndicate (Australia, UK, US) can dish it out but cannot take it. And what happened to the indictment? It was served to the European Court of Human Rights and the International Criminal Court and did not merit even the courtesy of a reply. So much for freedom and democracy.

And speaking of freedom and democracy, which part of international law does the concentration and torture camp at Guantanamo Bay respect?

The way forward? Those putting themselves forward to represent the people must not have any contact whatsoever with the BARFS mentioned above. That way maybe the corporatist model can be reversed into a capitalist one and the socialist model can reappear as a viable alternative, albeit with some social and economic vectors introduced.