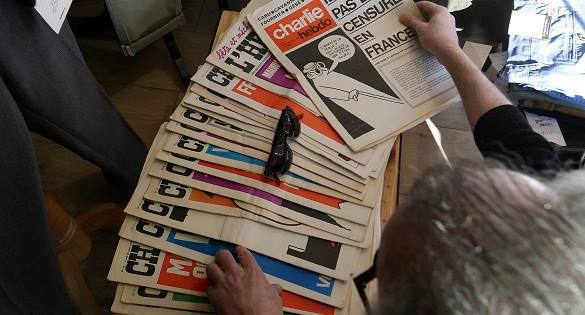 Can anyone in these United States imagine... if just as a passing thought... what would happen if Mad or the New Yorker had in their magazine front covers drawings mocking Jewish victims of Hitler's Holocaust?  Would American courts, B'nai B'rith, the Jewish Anti-Defamation League or myriad other Jewish-American political organizations tolerate, much less permit, such effrontery to human dignity in the name of satire, and the all-too-often misinterpreted shield that freedom of speech provides?  No, that would not be allowed to occur in the US; and if it did, the consequences as an aftermath would be powerful and swift.

What in the US might be considered overt provocation to a minority of 2 to 3 percent of its population (Jewish), French courts have denied such assignation [Grand Mosque vs. UOIF, 2007] to the outrage of 5 to 10 percent of its population (Muslim).  It may seem incongruous to obtain such opposite results from two countries, France and the US, where democracy is claimed to have such a prominent role. However, the answer is rather simple: the Jewish minority in the US, barely one-third the percentage of the Muslim minority in France, possesses an institutional influence in America probably a hundred-fold of that which Muslims have in France.  For once, let's dispense of our blindfolds, and see things the way they are without rancor or prejudice.

For Americans, the late Charles Schulz' iconic comic strip, Peanuts, had characters we can love and identify with; particularly meek, unsure and confidence-lacking Charlie Brown; and also the girl cast from his reverse mold: abrasive, irreverent and streetwise, Lucy van Pelt.  As much as Americans loved, and pitied, Charlie, it was Lucy who best represented success, even if at someone else's expense.

Befitting Charlie Brown's humble simplicity, it was little wonder that Hara-Kiri, a French magazine of satire banned from publication in 1970 would soon be re-launched as Charlie Hebdo, the name Charlie presumably honoring the character in the comic strip carried by the magazine.  Never mind that Hara-Kiri had been banned for mocking the death of President Charles de Gaulle; the last laugh by the publishers who had adopted two Charlies (Brown and de Gaulle) to create one refuge for their political satire.

During its first decade of publication (1960-1970), Hara-Kiri had little financial success, and the name change in the decade which followed would not add any magic for them, closing its doors in 1981.  A decade later, Charlie Hebdo would be resurrected (1992) with its satire centering far more in politics than in the aspects of popular culture.  The demise of the Soviet Union and upsurge of a "terrorist class" resulting in great part from America's flagrant and ever-increasing forceful intrusion in Middle East affairs, offered fertile ground for Charlie Hebdo to succeed... although the weekly circulation figure would usually stay below the 50,000 mark.

Americans are not Charlie

Now, a week after Al-Qaida (Yemen) took justice, or what they determined to be justice, on its own hands, three million copies of Charlie Hebdo are papering the streets of La Belle France.  Financial viability for the publication, perhaps; but a sociopolitical major challenge as to how France responds from both Muslim and non-Muslim quarters! "Je suis Charlie" may have become an angry, symbolic response to what we in the West view as abhorrent terrorism... without taking the time and effort to analyze the birth and reason for such terrorism, and the hand we may have in its propagation.

No, we Americans are not Charlie; and most would not wish to appear center stage in Paris and be accused of first-degree hypocrisy.  Many world leaders who did show up to fraternize and march in solidarity alongside France's François Hollande could easily be taken to task on human rights, freedom of speech, war crimes or, at the very least, be branded as followers of America's "nouveau-warmongering" (war via sanctions).

In her trimestral-fresh capacity as ambassador to France (and Monaco), Jane Hartley, was more than adequate to represent the Lucy in us.  Let's be reasonable: President Obama was still decompressing from his holiday in Hawaii, while America's high profile diplomat, and French speaker (a language he learned during summer vacations in France as a child... Vive la élite americaine!), Secretary of State John Kerry, had an important engagement with India's Prime Minister Narendra Modi, the "I" in BRICS ménage-a-cinq.  But worry not, Kerry will be making nice with Hollande this week.

No, we Americans are not Charlie... ask the Russians; sanctions-givers brandishing a Lucy attitude, that we certainly are.