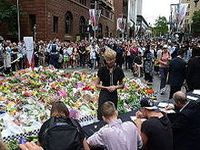 While many in the government and media rush to pull the greasy wool over our eyes, you will probably need to get a lift to work with a sympathiser such as myself re your honest observations about the Muslim terror attack in Sydney as I daresay your fellow journos who have been quick to cover and apologise for what was behind it and those who immediately thought about their own insane agenda (Wendy Pigface) or offered people of the Muslim faith a lift to work in case someone verbally abused them obviously didn't have or lose a loved one in that Lindt cafe yesterday did they.

I will not write or speak his name because that is what he wanted. He is not worthy to be remembered by name or deed; yet another known to authorities monster, an Adrian Bayley waiting to happen. These deeply premeditated religiously/sexually motivated, related crimes shouldn't happen in a sane political/justice system which ours clearly isn't. Ours is just asking, literally begging for it. For violence. But we should remember the names of the people who let him in and let him off because they are the real menace to our society, he is just the empty vessel of evil intentions within our all controlling political system! We will not know them, they will remain our anonymous home grown terrorists.

My prayers go out to the victims of not only a very bad man indeed but our botched and corrupted governing on what has turned out to be a thoroughly Muslim dominated and ruined Christmas in Australia thanks to the appalling, irresponsible, highly invasive, derogatory to our freedom loving way of life, damned slack policies of our government past and present.

What was that terrible man doing here?

Why was he offered Australian citizenship?

What was he doing walking the streets next to our children this Christmas?

Why wasn't he deported?

Why is 'deportation' a dirty word to our government ministers?

He should have been tossed back to the middle eastern hell he brought back with him years ago.

As we are all entitled to freedom of speech including the wife burning bastard who decided his domestic violence and sexual molester record should spill over from his dirty little lair and into a coffee shop and onto the streets of an Australian capital city yesterday, I wanted you to know I texted a relative "Re sydney siege - pm & media say carry on as normal. Easy to say if you or your family are lucky enough not to have been in that cafe this morning. It's not over yet" because I at least knew it wasn't at 1.12pm on Monday after I heard Dr Tony's first cheerleader response. Where was he hiding his pom poms!

If I hear one more politician or media lovey from here to Canada say this won't affect us, carry on as though nothing has happened I will gladly shoot them myself, someone give me a gun!  How dare they. How dare they try and tell us to behave like unfeeling robots just because they are hollow tin men.

It's common, insensitive and tacky beyond belief of our Avon salesmen politicians to so quickly urge our communities to get on with business while the poor hostages were still begging a sex pervert wife killer for their lives.

Why, we even had to listen to Joe Blow blurt about the budget because NOTHING was going to rain on his or the Coalition government's parade - while those poor devils were still trapped for God's sake in that nightmare but what should have been dream coffee shop destination to spend half an hour in Sydney. Where is the empathy, the respect.

I am so very sorry for the dead and so very sorry for their relatives who had to listen to grimy little bureaucrats and grubby little 'pigs' of women like Bacon who call themselves journalist be so insensitive to their terrible time and ruined forever ideas of a Merry family Christmas.

People are dead for no reason, people were injured. I will not just obey orders and get on and pretend it never happened, that it doesn't matter as long as it didn't directly affect me and my family because it did affect our hearts and minds, I will be honest about it if our Prime Minister and his buddy Harper won't. They say 'don't worry, forget about it and let's get on with announcing our budget regardless' because 'they' let 'em in Mr Bolt since you asked 'who let him in' again!

And it affected every Australian who even dares to dream of letting their loved ones actually leave the harem and go out in public and buy them a box of chocolates for Christmas without fear of being shot dead or blown up or beheaded; every parent and child with a heart and fading sense of freedom who loves celebrating the Son of God's birthday - to remind those who have forgotten him and I wish our business minded and mentally corrupted political and media maniacs who want to 'carry on' with their own selfish, anti-Christ lives and agenda would just shut up now and tell it to their maker later. The Devil that is.

I am tired of Muslim and it's strongly media related misery frankly, it's depressing and terrorising our entire nation as much as Hockey's announcements. What's their problem. They can't get enough apparently while the rest of us have had ENOUGH!

And I will NEVER accept weak and greedy minded, cold blooded men like Abbott and Harper who hate animals and stand by and watch them being tortured and murdered by eco-terror taking the wheel and telling us not to stop and pay our respects on dark days of Muslim terror like yesterday but to simply ignore what's happening and continue on like it's a only an action packed scene from their ongoing movie simply because they are delusional enough to think they are just like our favourite movie stars(sad)and this is as close as they will ever get to the big screen.

And like most Australians, I don't need someone to 'ride with me' because I can drive myself so don't worry about me Mr Bolt but who is driving the Batmobile today!