President Vladimir Putin gave a lesson in diplomacy before he left the G20 Summit in Brisbane after he had finished his programmed schedule praising the hosts of the venue for the "favorable, friendly and businesslike" atmosphere. While some media outlets have been trying to sidetrack the real questions under discussion...let's see the real issues. 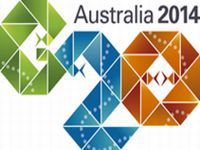 Predictably, the West in general and the ASS (Anglo-Saxon Syndicate, namely USA and chief poodle UK, ably attended by lackeys Canada and Australia) in particular, doing the work of the FUKUS Axis (France-UK-US), trying to justify imperialist ventures and foreign policy disasters such as Iraq, Syria and Libya, were in full song in Brisbane. Before I continue, I have one word to say to Cameron, Harper, Abbott and Obama: Iraq.

The hype had started before the Summit with puerile diatribes by Australian Prime Minister Tony Abbott, bully-boy words in a clipped Eton accent from alleged former Bullingdon Club member Cameron, some cracked expressions and crackly words from an Obama trying to crack the whip, one who has suddenly aged exponentially and the cherry on the cake, a lesson in arrogance from Harper, the Canadian - you know, the country which allows its citizens to hack baby seals to death or else skin them alive and leave the skinless bodies floundering in panic on the ice. Before I continue, I have one word to say to Cameron, Harper, Abbott and Obama: Iraq.

The diatribes were about Ukraine - you know, the country whose democratically elected President (Viktor Yanukovich) was ousted by mob law orchestrated from the US of A (who else) as obediently, the other ASS members fell into line, praising the new Government whose supporters committed Fascist massacres in Eastern Ukraine, burning people alive, strangling cleaning ladies with telephone wire, then tossed charred bodies from windows as the crowds looked on applauding and jeering. Yes, ladies and gentlemen, this is the side that Harper, Cameron, Abbott and Obama support. Ukraine, the country which refuses to pay its bills then steals resources like a crack-headed whore, ready to jump into bed with anyone, hey! even Hunter Biden, the son of the US Vice-President, who (surprise surprise) appears in a position of power inside the Ukrainian energy lobby. Maybe he can tell his hosts to pay Russia what they owe, for once. Ukraine, where the first shots fired were against the police and the crowds at the same time, from the sixth floor balcony of Hotel Ukraine in Independence Square, Kiev, to start a cause and incriminate President Yanukovich. Before I continue, I have one word to say to Cameron, Harper, Abbott and Obama: Iraq.

After the Fascist Massacres, it is hardly surprising that the residents of Donbass took up arms and defended themselves. The notion that Russia is involved is doubly ludicrous - those of us who know Donbass and its residents are fully aware that they need Russia for nothing, nor even desire military aid, and secondly of course if Russia were involved, Kiev would have been occupied within 48 hours, the Fascists would have been removed and the murderous scum gravitating around the new forces in Kiev and their foreign... bootlickers...would have been sent to prison. Before I continue, I have one word to say to Cameron, Harper, Abbott and Obama: Iraq.

So much for Ukraine. And Iraq. Just one final point. Those who support the foreign policy of Cameron, Harper, Obama and that Abbott, why don't they man up and go to visit north-eastern Syria and Northern Iraq? Sterling job their countries did there. Kiss Kiss.

Now, back to the point.

After completing his programmed schedule of activities, Vladimir Putin set off for Vladivostok and Moscow, praising his hosts after giving a lesson in diplomacy and a gentlemanly answer to the arrogance of Cameron and Harper in particular, labelling the Brisbane Summit as "favorable, friendly and businesslike". Contrary to what some would like to believe, President Putin did not leave the Summit "early" because his agenda was completed and after all, the answer to quips about Ukraine is "ah so you support the Fascist massacres and now we're at it, what about Iraq?"

As Russian Finance Minister Anton Siluanov reported on Russia's contribution to the Ebola Virus Disease outbreak in West Africa, Vladimir Putin was able to reflect on the outcome of the last two days, ending a hectic week of three major Summits. Firstly, despite the attempts by Tony Abbott to remove climate change from the list of priorities, the words Climate Change were audible. How this is addressed in practical terms is another issue.

Secondly, a clear commitment on Ebola Virus Disease was stated, although not quantified, while at the same time individual nations are committed to sending teams, aid and equipment to the region, in which Russia is one of the countries leading the effort (unmentioned in most Western media outlets, as usual, is the tremendous degree of support being provided by Cuba, despite the inhumane Fascist blockade mounted by the US of A).

Thirdly, further steps were taken towards curtailing tax evasion with a commitment to share information.

And now for the main issue: economic growth, translated into the four-letter word: JOBS. We will remember that the Soviet Union offered guaranteed employment and an unemployment rate of zero per cent, while at the same time it provided free housing, free pre-school facilities, free education, free general healthcare, free dental care, free maternal healthcare, free higher education, free sports and leisure facilities, free training for sports and cultural activities, social mobility, free coaching in other extra-curricular activities, free participation in youth movements, free heating, free electricity, free water, subsidized fixed-rate telephone networks, safety on the street, security of the State, and 250 billion USD in overseas development programs in the countries which the Union and its allies had freed from the yoke of Imperialist tyranny.

The Promise of Brisbane is to deliver, at least, a two per cent growth rate globally by 2018, creating millions of jobs in the process and adding some two trillion USD to global GDP (we must remember that the budget for the North Atlantic Treaty [Terrorist] Organization, NATO, is 1.2 trillion USD each and every year, a trillionaire budget trading in murder and destabilizing sovereign states).

The point is, there were huge progresses made in the last century as regards children's rights, women's rights and workers' rights. In the last ten years, since the FUKUS (France-UK-US) ASS (Anglo-Saxonic Syndicate) lobbies went globe-trotting, many of those rights have been swept off the table and so what legal framework exists today for the G20 to make their verborreaic statements and promises?

How hollow is the Promise of Brisbane?